A series of Turkish drone strikes targeting senior Kurdish figures in northeast Syria appears to be the prelude of an attrition strategy to further restrict the main Syrian Kurdish group in the region and hamper its autonomy project. 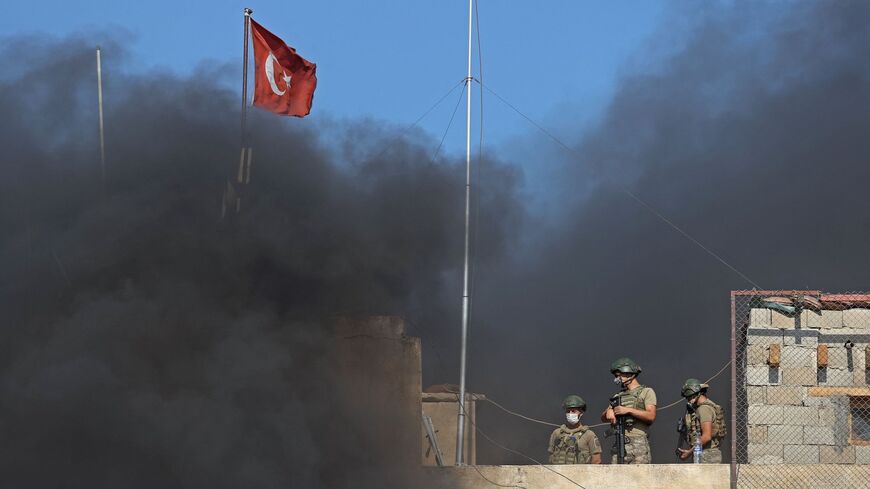 Turkish soldiers stand guard atop an outpost as smoke billows from burning tires during a demonstration against Turkey's perceived inaction over the latest Syrian regime attacks, in the village of Balyun in the rebel-held southern countryside of Syria's northwestern province of Idlib on July 22, 2021. - OMAR HAJ KADOUR/AFP via Getty Images

Breaking a long lull in its military campaign against Kurdish forces in northeast Syria, Turkey has launched a series of drone strikes targeting high-profile members of the People’s Protection Units (YPG), apparently with quiet nods from Russia and the United States.

The YPG forms the backbone of the US-backed Syrian Democratic Forces, which controls much of northeast Syria, as part of a de facto autonomous administration along the border with Turkey. Ankara views both outfits as terrorist groups for their links with the Kurdistan Workers Party (PKK), which took up arms in southeast Turkey in 1984 and is designated as a terrorist organization by Ankara, Washington and much of the international community. Washington, however, makes a distinction between the PKK and the SDF, its chief local ally in Syria.

One of the strikes hit a YPG vehicle on the Qamishli-Amuda road Aug. 19, killing Salahuddin Shahabi, a senior field commander known also by his nom de guerre Renas Roj, a member of the YPG military council and their driver. It was the first Turkish attack against a YPG target since Operation Peace Spring in fall 2019, when Turkish forces and allied Syrian rebels wrestled control from the YPG in a border pocket between Ras al-Ain and Tell Abyad, including a section of the strategic M4 highway. According to Turkish news reports, the strike went ahead after Turkey’s intelligence service learned that Shahabi, the commander of the YPG’s Hasakah-Qamishli headquarters, had left Hasakah by car. A Turkish TB-2 Bayraktar drone hit the vehicle in the pre-dawn hours after it left residential areas, according to the reports.

A second strike followed later that day, targeting YPG headquarters in the town of Tal Tamer, north of Hasakah, where a high-level meeting was underway. The building was reportedly the venue of meetings between US generals and YPG commanders in the past. The attack claimed the lives of seven YPG commanders including Sosin Birhat from the Women’s Protection Units, the all-female branch of the YPG, and left nine people injured.

On Aug. 22, a drone attack destroyed a car in the village of Himo near Qamishli, killing a YPG commander and leaving three other people seriously injured, according to local sources. It came shortly after a drone hit a vehicle in the village of Qara Mazrah, southeast of Kobani. According to sources in Ankara, the vehicle belonged to a YPG commander who was killed in the strike.

Are the drone attacks the harbinger of a new Turkish strategy of a war of attrition? Is Turkey bent on expanding its long-running drone operations against PKK targets in northern Iraq to northern Syria? Are the strikes taking place with tacit US and Russian approval?

The existing diplomatic and operational outlook in the region, including the US-Russian relationship, precludes another large-scale Turkish ground operation. Thus, Turkey seems to be bracing for a protracted war of attrition to restrict the YPG’s mobility, weaken its command, control and communication capabilities and demoralize its fighters. Such a strategy would draw on drone strikes as well as the Turkish-made air-to-land SOM cruise missiles, which have a range of 200 kilometers and could be fired by Turkish warplanes and drones from the other side of the border without entering Syrian airspace. The strategy, it seems, will focus on targeted killings of YPG leaders, relying on human and signal intelligence to detect the whereabouts and activities of the targets. Unlike the US drone campaign in Syria, thanks to its geographical advantage Turkey can sustain a war of attrition with armed drones and cruise missiles for a long time.

Russian air raids in the south of Idlib, the northwestern province held by Islamist militants, have increased simultaneously with the Turkish drone strikes, fueling suspicion of a potential Turkish-Russian deal, whereby Russia and the Syrian regime would take areas in Idlib in return for letting Turkey take areas in the northeast.

Washington has so far refrained from any public reproof or a clear stance on Turkey’s drone strikes, either because it is preoccupied with the chaos in Afghanistan or too pleased with Turkish cooperation in the evacuations from Kabul. Either way, Turkey appears to be looking for a free hand for airstrikes in both northeast Syria and northern Iraq in return for the support it has offered the United States in Afghanistan.

But could a war of attrition eradicate the threats that Ankara perceives from the YPG and its drive for an autonomous Kurdish region abutting Turkey’s own Kurdish-populated areas across the border? With a war of attrition, Turkey can certainly liquidate some senior YPG figures, weaken YPG’s military capabilities, restrict its mobility, disrupt its logistic routes and foment fear and demoralization in YPG ranks, but it can hardly undo the YPG’s political progress and de-territorialize its political vision. Moreover, attacks on the YPG cannot destroy the popular base the group enjoys in northeast Syria and might even backfire in this respect, especially in the event of civilian casualties.

That said, de-territorializing the YPG remains Ankara’s ultimate military objective in northern Syria, meaning that it will continue to look for an opportunity to launch another large-scale ground operation to seize territory from the YPG. Such a campaign would require the acquiescence of the United States and Russia, including a green light for Turkey’s use of Syrian airspace. Judging by the existing diplomatic climate and the operational outlook on the ground, neither the United States nor Russia are likely to agree to such a Turkish move, at least in the short term of six to eight months. Turkey’s targeted killings of high-profile YPG figures, meanwhile, will almost certainly continue.