How Turkey's soldiers and spies saved the day in Syria 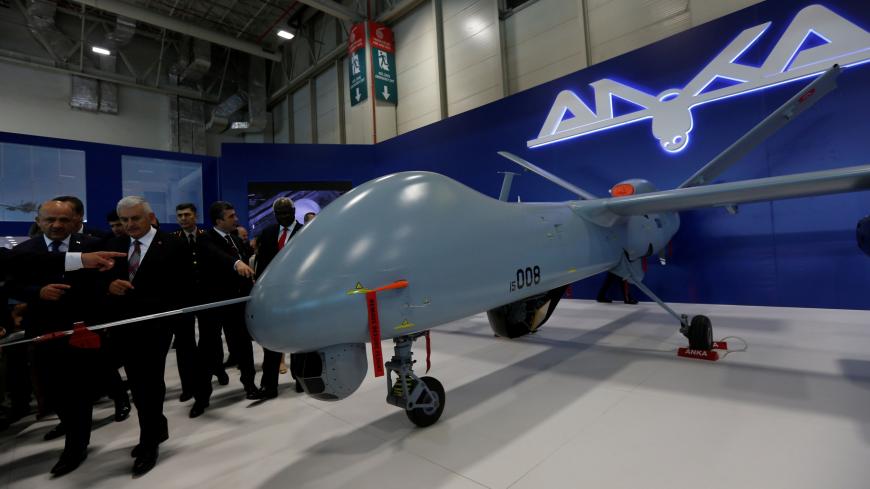 Turkish officials inspect an Anka unmanned aerial vehicle at IDEF 2017, the 13th International Defense Industry Fair, in Istanbul, Turkey, May 9, 2017. Turkey put the Anka to strong use at the end of February and early March 2020 in Syria. - REUTERS/Murad Sezer

Many Turks understandably question the cease-fire agreement that President Recep Tayyip Erdogan concluded with Russian President Vladimir Putin in Moscow on March 5. They are upset that scores of Turkish soldiers died at the hands of the Assad regime (and probably Russia) and that Damascus gained more ground in Idlib. Expect that cries of “What are we doing in Syria?” will get more intense and for the Turkish public to become even more divided over their country’s continued involvement in the Syrian civil war.

Several Turkish observers (including Al-Monitor writers Metin Gurcan and Kadri Gursel) correctly point out that the March 5 agreement with Moscow gives Ankara a much-needed respite and spares it from a new influx of refugees. But vehement critics of Erdogan take him to task over his comments in early February when he threatened to push back Syrian President Bashar al-Assad’s forces to their original positions under the Astana agreement of 2017.

Although the Turkish president’s detractors have a point, they fail to notice a key fact: Had it not been for the Turkish Armed Forces (TSK) and the National Intelligence Organization (MIT), Ankara would have suffered a serious defeat in Syria and on the international stage.

A former MIT officer who now works as a professor of international relations at a university in Istanbul told Al-Monitor on condition of anonymity that after the TSK turned over its Electronics Systems Command to MIT in 2012 (which restructured it as Signals Intelligence Directorate), Turkey’s SIGINT capabilities expanded considerably. The spy-turned-professor said, “Successful steps have been taken in recent times in developing manned and unmanned aerial vehicles and the destruction of terror or military targets in foreign countries through ground units. Intelligence played a role in many fields in Syria from the beginning … including the latest Idlib operation.”

Indeed, during Operation Spring Shield, Turkey’s TB-2 and Anka UAVs succeeded in penetrating Syria’s airspace and carrying out punitive strikes against the Assad regime and its allies. Aside from the drones, the heroes in that story were the TSK’s E-7 airborne early warning and control aircraft (codenamed Peace Eagle) and MIT’s own tactical UAVs that identified targets. Thanks to the sophisticated coordination between the TSK and MIT and among TSK units, a Turkish air force F-16 managed to shoot down two Syrian Su-24s on March 1 without entering Syrian airspace. Additional support for Turkey’s punitive strikes against Syrian forces came from such platforms as the new-generation T-155 self-propelled artillery, various multiple-launch rocket systems and the KORAL land-based jammer.

The Turkish Defense Ministry announced that its forces destroyed 151 tanks, 47 howitzers, three airplanes, eight helicopters, three drones, eight air defense systems and killed over 3,000 troops fighting for the Assad regime. Although the Syrian side disputes those figures, from the Turkish viewpoint, the military results of Operation Spring Shield were impressive.

The second factor that helped Turkey to avoid a disaster in Syria were “spy commandos.” Coined by former CIA Inspector General Frederick Hitz in the early 2010s, the flashy term refers to the CIA’s Special Activities Group, the military-trained agency operatives who engaged in paramilitary activities during the Cold War and who continue to operate in post-9/11 battlegrounds these days. As Hitz pointed out in 2013, the United States degraded al-Qaeda capabilities in such diverse places as Afghanistan, Pakistan, Yemen, and North Africa to a large extent through the effective use of UAVs and “spy commandos.”

The TSK and MIT operated along similar lines in northwest Syria on March 1-5. While Turkish military UAVs carried out much of the fighting in Idlib with MIT support, various attacks against high-profile Syrian targets — including the killing of at least one army general, according to a Syrian lawmaker, and two other generals, according to Turkish media reports — took place because of old-school “human intelligence.” According to the former MIT officer from Istanbul, along with SIGINT capabilities and TSK military units on the ground, MIT assets — especially members of militant opposition groups or intelligence operatives implanted into those groups — must have been instrumental in locating Syrian targets.

But an Istanbul-based defense and security analyst who spoke with Al-Monitor on condition of anonymity expressed skepticism that Turkish special forces would have been involved for the sorts of targets destroyed in northwest Syria — tanks, personnel carriers, artillery and short-range air defense systems. He said, “Almost none of the targets [that the TSK hit] would have necessitated careful intelligence work by ‘spy commandos.’ None of those targets are worth the risk to deploy special forces units.” But the expert outlined several exceptions in which Turkey may have used “spy commandos” or highly trained rebel forces to attack the Syrian military. He cited the attack on Nayrab air base and an alleged chemical weapons factory in Aleppo, which are not so close to the front lines between Turkish and Syrian forces.

The analyst added that, given the nature of the war in Syria, it would make more sense for the MIT rather than the TSK to coordinate the activities of rebel groups. “Such relations are not run by militaries but intelligence organizations,” the analyst said.

All told, February-March 2020 was hardly Turkey’s finest hour. In fact, even in areas where the Turkish side showed strength, limitations were manifest. Several Turkish defense experts pointed out how, despite their country’s remarkable strides in developing indigenous military capabilities, its drone fleet is still in its infancy. While the next generation of Turkish UAVs looks promising, the current platforms suffer from limited maneuverability, speed, range and service ceiling, and they cannot carry large munitions — as shown by their attrition rates in the face of enemy air defenses.

In the final analysis, good equipment and well-trained personnel can only do so much (just ask US military forces in Afghanistan and Iraq). Good soldiers, good spies and top-notch gear can operate most effectively only if their national leaders can mobilize those resources in the service of realistic goals that enhance the national interest. That realistic perspective has been missing from Turkey’s Syria policy for a long time.