Opposition group granted 'positive' meeting in Moscow as all sides wait to learn next US move in the region. 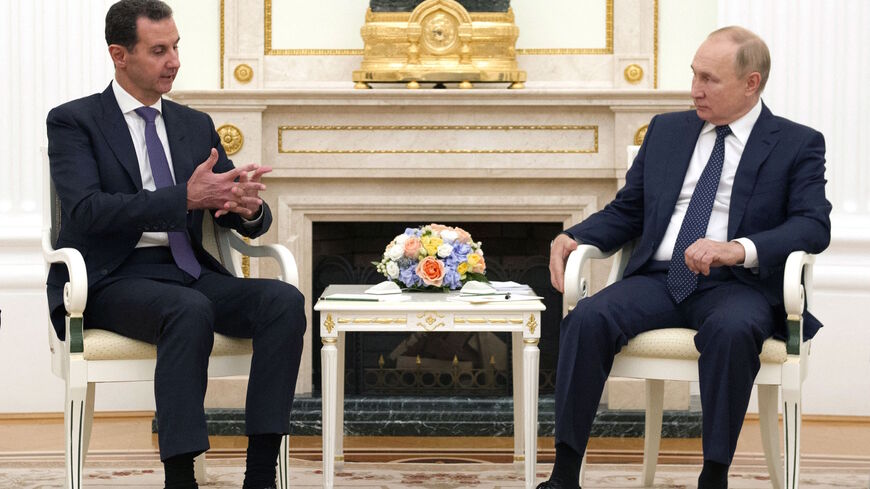 Russian President Vladimir Putin received his Syrian counterpart, Bashar al-Assad, in Moscow on Sept. 13 — the first meeting between the two in Russia since 2018. During their talks, Assad referenced former negotiations in Sochi and Nur-Sultan aimed at ending the conflict, yet noted “the political processes which we used to carry out stopped approximately three years ago.” In turn, the Syrian state news agency SANA reported that the leaders of the two countries discussed cooperation in "combating terrorism and completing the liberation of lands which are still under the control of terrorist organizations.”

The meeting was primarily about the Idlib de-escalation zone, which is under the control of the Turkish military, as well as the terrorist organization Hayat Tahrir al-Sham and the pro-Turkish Syrian National Army (SNA), representing the so-called moderate opposition. The SNA also controls zones named after various Turkish operations in northern Syria, including operations Olive Branch, Shield of the Euphrates and Peace Spring.

Turkish troops, which were brought into Idlib in response to an offensive by the Syrian army in February-March 2020, have demonstrated that they are capable of inflicting heavy losses. At present, Ankara has more than seven dozen military bases and strongholds in this Syrian region, staffed by 7,000-15,000 servicemen with tanks, artillery and air defense systems, including the medium-range Improved Hawk system. As the Turkish leadership has not reconsidered withdrawing from Idlib, the chances of returning the region to Damascus' control remain slim.

The withdrawal of American troops from Iraq and Afghanistan probably raises hopes among the Assad regime that Washington will finally decide to leave Syria, leaving its Syrian Democratic Forces (SDF) partners to fend for themselves, as happened in Afghanistan. In such a scenario, they and the Autonomous Administration of Northeast Syria (AANES) affiliated with them would face a direct attack both from the government forces, supported by Russia, and from the opposition SNA, supported by Turkey.

Against this background, on Sept. 16, a delegation of the Assembly of Democratic Syria and AANES headed by Ilham Ahmad visited Moscow "at the official invitation of the Russian Foreign Ministry," Hawar News Agency, the Autonomous Administration’s de facto official news service, reported. “The meeting was positive. The emphasis was placed on a political solution to the Syrian crisis in accordance with UN Resolution 2254 and the need for the Democratic Syrian Assembly to participate in the political process. They also discussed the ongoing violations of the sovereignty of Syria by Turkey. "

AANES is trying to secure Moscow's guarantees to protect the Syrian northeast from invasion by the SNA and Turkey, and to be able to bargain with Damascus for special conditions for the region. However, a well-informed Russian source told Al-Monitor that such requests from representatives of the Syrian Kurds are viewed with skepticism by Moscow as long as the SDF is a military ally of the United States.

Russian officials believe that the SDF is preparing backup options in case the Americans leave. But if US troops remain, then the administration of the Syrian northeast will not rush to follow the roadmap that it proposes to work out on the Russian side.

Russia, in turn, is trying to push the Syrian Kurds into a dialogue with Damascus, but without US input. The implication is that the Syrian Kurds themselves must begin to distance themselves from the United States, even before Washington makes a final decision on withdrawal.

At the same time, the Russian side continues to restrain Damascus from striking those areas held by the SDF which have been removed from the American security umbrella — for example, some regions of the Aleppo province (Manbij, Tel Rifat and Ain al-Arab) and the city of Ain Issa. An attempt to return them to the full authority of Damascus would completely alienate the Syrian Kurds from Moscow, and the SNA and Turkey would also be ready to simultaneously launch an offensive against the SDF formations with the Syrian government forces.

Increased attacks by Turkish drones and artillery shelling of SDF positions may also signal a limited operation by Turkish troops and the SNA in order to expand the "Peace Spring" security zone. In particular, experts have argued that such an attack may be provoked by the Syrian Kurds themselves, who are organizing attacks against the SNA and Turkish troops in the "Olive Branch" and "Shield of the Euphrates" operation areas.

The growing number of Turkish strikes on SDF positions are accompanied by more Russian air activity over Idlib. Thus, a possible attack by Turkish troops and the SNA on some vulnerable areas of the SDF could happen in parallel with the offensive of the Syrian government forces on the southern part of the Idlib, in Jebel al-Zawiya, in order to capture a section of the strategic route M4. That is, we can talk about certain mutual concessions between Moscow and Ankara.

At the same time, Moscow can use the Turkish threats to Kurdish formations in the Syrian northeast in order to split the SDF, push the fighters and entire units of this alliance to withdraw from this structure, and cooperate with Damascus. The most likely option for the gradual reintegration of these areas into the Syrian government is the scenario from Daraa and Quneitra in the Syrian southwest — preserving the local administration and through the process of reconciliation of the rebel militants with the regime.

Bearing those facts in mind, Russia will try to further ensure the status quo in Daraa and Quneitra, while retaining the ability of local opposition councils to autonomously manage settlements and remain intact. Therefore, while Syrian state flags are being raised and checkpoints created in opposition enclaves — as concessions to Assad — the real power of the Syrian regime there remains largely formal. Also, according to a representative of the Syrian civil opposition based in Moscow who spoke to Al-Monitor on condition of anonymity, the process to disarm opposition fighters in these areas is primarily a PR action in his view. Many more small arms still remain in the hands of the reconciled rebels in these settlements.

The future of this region will continue to be a topic in Russian-Syrian talks. The possible construction of a gas pipeline from Egypt to Lebanon through Daraa and Quneitra is the only economic project with the possible involvement of Damascus supported by the United States. Accordingly, it can remove other related projects from sanctions with the participation of Jordan and other Arab states. Amman is also interested in maintaining the status quo in Daraa and Quneitra, through which the gas pipeline can pass, while maintaining the enclaves of the opposition, albeit disarmed, but under Russian control, instead of possible bases of pro-Iranian formations that may appear in their place.