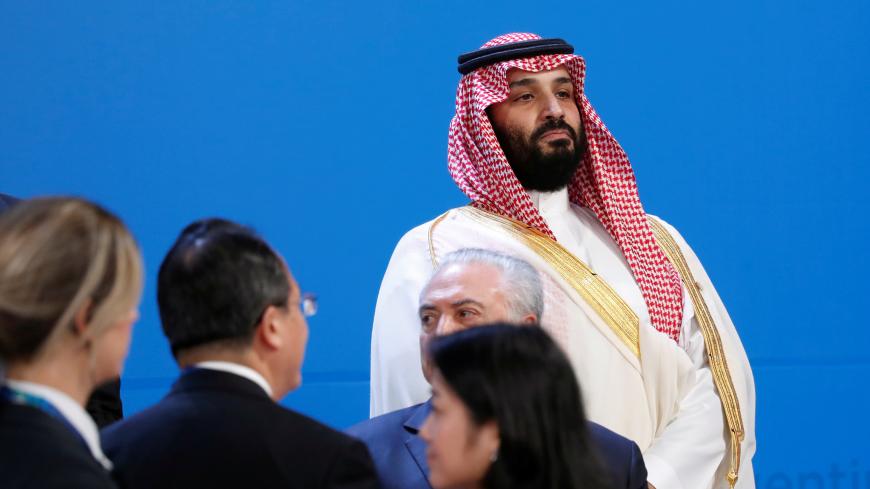 Saudi Crown Prince Mohammed bin Salman has traveled around the world to try to reboot his tarnished reputation. He has had some success with other despots but he has become a polarizing figure who is damaging the kingdom’s brand. In the United States, the 75-year-old partnership is under great stress and risks losing its traditional bipartisan support.

The crown prince got an enthusiastic reception at the G-20 summit in Argentina only from Russian President Vladimir Putin. Even Donald Trump, his foremost protector, decided against a one-on-one meeting. Nonetheless the crown prince got the group photo he wanted, where he stood with the rest of the G-20 leaders, which is being used inside the kingdom to reassure Saudis that all is well.

The crown prince flew over Morocco, a long-standing Saudi ally, on the way home from Buenos Aires. King Mohammed VI was applauded by the Moroccan press for not meeting the prince. In contrast, the Algerian media criticized the government for receiving Prince Mohammed. The Saudis supported the brutal crackdown on the Islamic opposition in the 1990s, which still arouses strong critiques of the army. President Abdelaziz Bouteflika did not meet the prince, citing poor health, a well-worn excuse for Bouteflika. A planned visit to Jordan is getting considerable criticism as well.

The White House remains adamant that the Saudi leadership is the crucial American ally in the region: vital for arms sales, cheap oil and containing Iran. The administration has been under siege as new revelations about the communications between the assassins of journalist Jamal Khashoggi and the crown prince’s office in Riyadh on the day of the murder have leaked out. The evidence of the prince’s complicity in premeditated murder is strong and getting stronger. Worse for the kingdom is that the Khashoggi affair has attracted more attention to the Saudis' disastrous war in Yemen, the worst humanitarian catastrophe in the world.

The Saudi alliance is now under more harsh scrutiny in the United States than at any time since the 1973 oil embargo. Unlike the 1973 strains, which involved matters of policy toward Israel, the current strains are more about a personality — namely the crown prince — than differences about policy. No one called for ousting King Faisal. The critics of Saudi Arabia today want a change in leadership in Riyadh, which is much harder if not impossible to achieve. It’s the recklessness and brutality of the crown prince’s behavior that is turning traditional supporters of the kingdom in the media and Congress against the Saudis. It’s hard to see how that will change: It’s more likely another misstep by Prince Mohammed will further discredit him.

While members of both parties in Washington have been critical of the Saudi behavior, the Democrats are more united in their posture than the Republicans. Every Democratic senator voted to invoke the war powers act last week to end American support for the war in Yemen. Republicans are split between critics and the president’s loyalists. If this partisan divide deepens it will have negative consequences for the relationship. Saudi Arabia has never been popular in America, but presidents of both parties have recognized the importance of strong ties with Riyadh. This might not survive the accession of Mohammed to the throne.

The only sign of good news is in Yemen. The passage of injured Houthis to Oman and talk of a prisoner swap is movement in the direction of ending the war and the blockade. If talks between the parties start as promised in Sweden, they will be the first in two years. The United States should throw its weight behind this process, not try to protect the crown prince’s obstructionism.

The Saudi royal family is undoubtedly watching carefully each diplomatic encounter between the crown prince and foreign leaders for signs that the Istanbul murder is being swept under the rug. It is more important to gauge popular opinion in the United States, however, to measure whether the foremost bastion of Saudi national security for three quarters of a century is slipping away. The kingdom badly needs a capable and astute ambassador in Washington today, but unfortunately Khaled bin Salman is as toxic as his brother.