Can Russia, China cooperate on the Middle East?

Russia and China seek to reinforce cooperation over the Middle East, but each approaches the region with its own rationale. 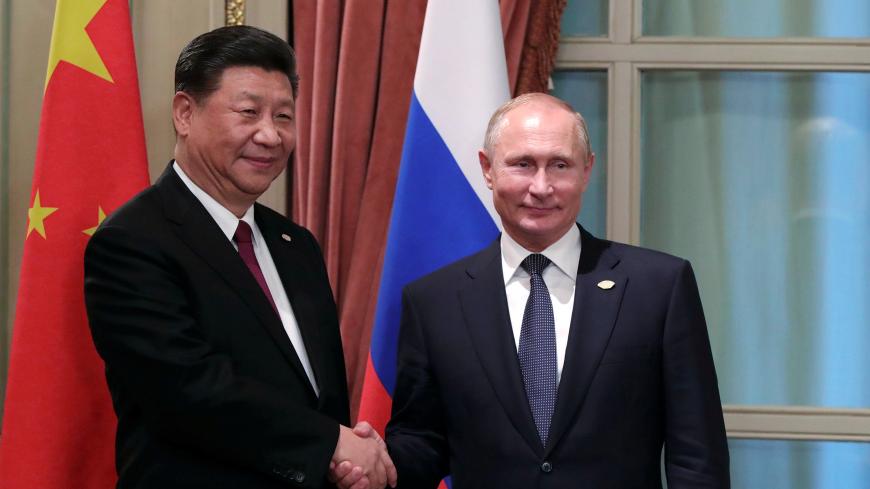 The focus of the discussions was on the current situations in Syria, Iraq, Yemen, Libya and the Gulf, as well as the Israeli-Palestinian settlement. Following the talks, the parties stated Moscow and Beijing share approaches to addressing the crises in the Middle East via politico-diplomatic tools “in accordance with fundamental principles of the international law and the UN Charter.” Most interestingly, Russian and Chinese diplomats agreed to maintain “dynamic bilateral dialogue on the Middle East issues that are in the mutual interest.”

Russia’s Syria campaign made Moscow one of the prime pacesetters in the Middle East in the security domain. China became the largest investor in the region in 2016, outpacing the United States and the United Arab Emirates. President Putin and President Xi Jinping occasionally showcase their strong ties. Even if the relationship between the two countries is profoundly more nuanced, the sour Sino-American relations, and arguably the worst US-Russia confrontation in history, makes Moscow and Beijing appear to be part of the “global powers axis of resistance” to the United States. Yet Russian-Chinese dealings over the Middle East seldom make news. This makes latest contacts between Russian and Chinese diplomats all the more interesting.

“We attach special importance to the development of ties with China in all areas. In addition to our relations being as valuable as they are and not dependent on the international situation and the situation in other regions around the world, we are neighbors. We are connected by a common border, geography and history, as well as our nations’ interests,” Russia Foreign Ministry spokeswoman Maria Zakharova stated at a press briefing the same day Bogdanov visited Beijing.

“It is evident that in today’s world that is lacking any movement toward stability, it is important to have a close dialogue with countries who are responsible global players. Moscow and Beijing have demonstrated these qualities many times,” she added.

Russia and China were both driven to the region by the same two imperatives: security and opportunity. For Russia, the initial driver was security, but monetization of various opportunities is now becoming equally if not more important. For China, investment opportunities, success of its signature Belt and Road mega-plan for strong trade routes between China and Central and Southeast Asia, as well as sources of energy for its growing consumption are what made the region critical in the first place. Yet all of this is seriously threatened unless the region is secure.

Russia and China were both driven to the region by the same two imperatives: security and opportunity.

“China is engaged in a complex system of economic, technological and politico-military spheres with all major regional powers. Since it has its interests everywhere it cannot take sides in various ongoing rivalries in the region. It has huge investments in the MENA region, thousands of Chinese workers work across the region. Security of all these assets is a mounting concern, hence a more dynamic military activity in the region and the military base in Djibouti,” Vasily Kashin, a senior fellow at the Center for Comprehensive European and International Studies at Moscow’s Higher School of Economics and a leading Russian expert on China, told Al-Monitor.

Traditionally, Russia and China are united in their opposition to “destructive foreign interference” in regional affairs. In 2011, Russia and China abstained from UN Security Council Resolution 1973, which ultimately enabled the toppling of Moammar Gadhafi and entailed a loss of billions of investments and geopolitical assets. The bitter lesson made the two take a more proactive stance on standing up to Western policies of political pressure and military action, yet the two are not fully aligned on how to better do it.

Speaking at a gathering with representatives of 21 Arab nations in Beijing earlier this year, China’s President Xi Jinping said development was “key” to resolving security problems in the Middle East, pledging a package of $20 billion in loans and some $106 million in financial aid to Middle East countries, as part of what he called an “oil and gas plus” model to revive economic growth in the region. Russia’s approach is that of dynamic multilateral diplomacy mixed with the projection of power and force.

Russians are also striving for status recognition, which makes their policies more “loud,” whereas the Chinese are keeping a much lower profile to get things done, though this may soon change.

​Kashin argued that China is “acting from behind” by promoting its political interests in the region, both via economic tools and through a phased support for Russia. He believes that while Syria may not be that important for China from an economic perspective, it is critical to the construction of Beijing’s policy in the region in general.

Until now, China has sided with Russia on six out of 12 UN Security Council resolutions on Syria that Russia vetoed.

Russia is dwelling on its image as a new security guarantor in the region. China is a go-to loan giver and perceived source of development and growth. Each has its own advantages as a partner, instills fears as a potential hegemon and arouses mistrust as an “outsider.”

Finally, both Russia and China have a terrorism problem. According to Putin, about 4,000 Russian nationals and 5,000 more from other post-Soviet republics joined the ranks of the Islamic State, Jabhat al-Nusra and other radical groups in Syria and Iraq. The Chinese authorities worry about Uighurs — a mostly Muslim people who speak a Turkic language and reside predominately in China’s far western region of Xinjiang — whose numbers in various terrorist groups in Syria vary from 1,000 to 5,000 militants. The number of extremists has shrunk, but the problem of domestic radicalization has not been entirely solved, either by the Russian campaign in Syria or the Chinese policy on Uighurs, which makes Moscow and Beijing’s involvement in this issue long-term.

“China feels negative toward the political Islam in general, and cheers for keeping secular regimes," said Kashin. "Given the robust campaign on suppressing Islam and separatism in the Xinjiang Uighur Autonomous Region, Beijing has to keep a watchful eye on the activity of Uighur migration and forces in the Middle East that support it. This is a particular irritant for China’s relations with Turkey that continues to flirt with the Uighur movement.”

Russian and Chinese policies are not supplementary, but both — each for its own reasons — seek stable relations with Middle Eastern powers. In turn, regional states may need both Russia and China to hedge their own stakes, diversify their own opportunities and promote their own interests.

Vasily Kashin played down the disagreements between Moscow and Beijing on military-technical cooperation with regional states, and argued there’s a particular interest on the Chinese side to draw closer to Russia.

“China is indeed Russia’s competitor in some areas, but these usually are the ones where Russia’s own positions are weak, like combat drones. Russia can in no way challenge China in terms of economy — just two very different weight categories — and the areas of interest to Russia are just of little interest to China. [But] Beijing is lagging behind Moscow in terms of political influence. The public opinion may take an even worse turn vis-a-vis China in light of the anti-Muslim repressions, and the US is actively promoting this narrative. So, China’s interest toward a greater cooperation with Moscow in the Middle East may be growing,” he concluded.