Russian President Vladimir Putin’s visit to China highlights the convergence of interests of Moscow and Beijing in the Middle East. 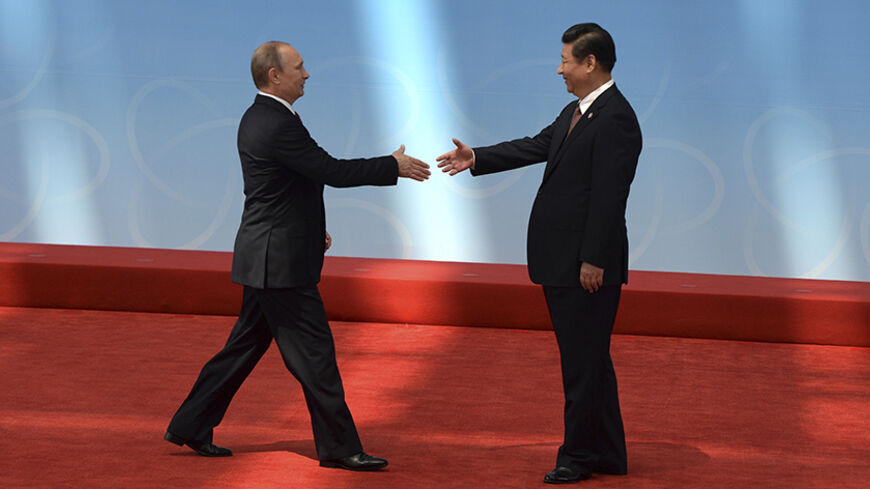 Russia's President Vladimir Putin (L) is greeted by his Chinese counterpart Xi Jinping before the opening ceremony of the fourth Conference on Interaction and Confidence Building Measures in Asia (CICA) summit in Shanghai, May 21, 2014. - REUTERS/Mark Ralston

President Vladimir Putin’s visit to China on May 20-21 culminated in the signing of roughly 50 agreements ushering in a period of unprecedented convergence between the two countries. Does this affect the situation in the Middle East and, if so, in what way?

Everything seems to indicate that the answer to the first part of this question is yes. Seemingly, the Middle East was not the focus of the talks between the two leaders. For all the obvious asymmetry in interests, however, the consensus between Russia and China seems to allow the two parties to seek further coordination in their actions, thus taking each other's concerns into greater account. Such consensus includes Syria, despite Beijing’s lesser involvement on this issue, relative to Moscow; Iran, within the P5+1 (the five permanent UN Security Council members plus Germany) negotiations with Tehran over its nuclear program; the fight against terrorism and extremism; the creation of a weapons of mass destruction-free Middle East; the condemnation of external intervention and the strategy of "regime change" as well as the push for "color revolutions;" the policy to reach a settlement in the Middle East; and relations with the new Egyptian regime and with respect to the Sudanese issues.

Last year, one of China’s main strategic regional projects was the economic region (or belt) of the 21st century Great Silk Road and the Maritime Silk Road, which intends to create a wide area of Chinese economic presence from China’s western borders to Europe. Although it does not aim to harm Russia’s integration projects or the development prospects of the Shanghai Cooperation Organization (SCO) in any way, the plan can still be construed as a specific challenge to Moscow. It is noteworthy that the project’s "region," despite its vaguely defined boundaries, also clearly comprises the countries of Western Asia (i.e., the Middle East).

Symbolically, soon after the talks with Putin, the Chinese leader opened the Sixth Ministerial Meeting of the China-Arab Cooperation Forum on June 5 in Beijing. The economy was the focus of President Xi Jinping’s speech in which he explained the meaning of the new formula "1+2+3" in Sino-Arab cooperation, namely: energy cooperation; infrastructure construction and creation of favorable conditions for trade and investment; and high-tech domains of nuclear energy, the space rocket sector and new energy sources. It was suggested that the creation of a free trade zone between China and the Gulf Cooperation Council (GCC) be accelerated. But there was a place for politics, too. In particular, Xi stated that China supports the peace process and the establishment of an independent Palestinian state within the borders of June 4, 1967, with East Jerusalem as its capital, "enjoying full sovereignty."

Within the Russian and Chinese expert community today the view prevails that, unfortunately, the unilateral efforts by US Secretary of State John Kerry to promote the Israeli-Palestinian peace process are not bearing fruit, and appear doomed to fail. The only way out of the impasse, therefore, is a return to collective mechanisms. So, as one of my well-informed Chinese interlocutors with whom I recently met in Beijing told me, why shouldn’t Russia and China in the current situation — given the proximity of their interests and positions — undertake joint initiatives to unblock the peace process, while initiating steps to "introduce this activity within an institutional framework?" In this context, for example, it would be worthwhile for Moscow to take the initiative to expand the international Quartet of mediators by including China. Some Russian analysts also share this point of view. It should be remembered that in the past the instrument of international mediation was already expanded, as in 2002 the Soviet/Russian-US duet was turned into a quartet by bringing in the European Union and the United Nations.

On the one hand, Russia is interested in using this unprecedented convergence with China in its operations on the Middle East arena, where Moscow has in many ways already been acting in unison with Beijing — as vividly emphasized in Xi’s positions put forward at the Sino-Arab forum.

On the other hand, given the current circumstances where the field of foreign policy cooperation between Russia and the West has significantly shrunk, the Middle East Quartet is one of few international platforms where Russia can constructively engage with the United States and the EU. With this in mind, introducing new players into this format of interaction — if such plan were actually to be considered, it would of course not be limited to including China alone — would somewhat dilute the significance of the trilateral Russian-US-European cooperation in the Middle East peace process.

As far as I can tell, not only is China's growing economic cooperation with Arab countries not a cause for concern in Moscow, but it is also viewed in a very favorable light. Thus, some analysts wonder whether China — if it takes the place of the United States, which is "pivoting to Asia," as the main importer of Arab energy resources — will not one day replace the United States as the security guarantor for the transportation routes of these resources.

Moscow’s and Beijing’s interests converge in the joint countering of terrorism, extremism and separatism. Among the militants from radical groups fighting against government troops in Syria, there are people hailing not only from Russia and Central Asia (fewer in numbers to those coming from Arab and Islamic as well as Western countries), but also from the Uighur minority in China. It is no accident that in the course of the talks between the Secretary of the Security Council of Russia, Nicolai Patrushev, and his Chinese counterpart in Beijing on June 6, the parties qualified the fight against terrorism as one of the key areas in which the consensus reached by the two heads of state during Putin’s latest visit to Beijing will be implemented.

The Chinese authorities’ active fight against the aforementioned threats, which are referred to as the "three evils," can carry some costs. For instance, recently, Beijing came under harsh criticism from Ankara for its actions in the Xinjiang Uighur Autonomous Region against the Uighur population, which the Turks believe to be their next of kin. In July 2009, Turkish Prime Minister Recep Tayyip Erdogan even described the measures taken by the Xinjiang authorities in Urumqi as "genocide against the Uighurs." Still, Ankara is keenly interested in long-term cooperation with Beijing, which is a powerful additional incentive for these two rapidly developing world economies. In April 2012, Erdogan began his official visit to China with a stopover at Urumqi. Disappointed by the failure of EU accession, the Turkish leadership has even started talking about the desire to join the SCO as an observer. Ankara expresses its willingness to cooperate with China in the fight against terrorists and condemns the separatism coming from some groups in Xinjiang.

There is no doubt that a comprehensive strategic partnership, in which Russia and China would act in concert along the political consensus reached by their two leaders, would in the short term — in one way or another — reflect on their Middle East policy, and have an impact on intraregional dynamics. It is still difficult to say, however, what the real effects and consequences of this process would be.

It is well-known that culinary themes are often very successfully used in politics. Chinese citizens reacted with approval to the fact that one of the first measures of Xi’s unfolding campaign against corruption was a ban on the Chinese military from holding banquets with alcohol. Russians liked the way Putin responded to journalists’ questions about how he relates to the fact that the G-7 leaders recently met without Russia: He simply wished them "bon appetit." The remark by the famous American journalist, however, about the Russo-Chinese convergence that "China will eat Russia alive," caused only a smile in China and Russia. According to both, this convergence is neither a union nor a tournament of predators, but a very pragmatic integrationist instrument of protection and projection of interests by the two powers, including in the Middle East.