Several US police departments are ending training in Israel amid pressure from pro-Palestinian activists as pro-Israel groups explore legal countermeasures. 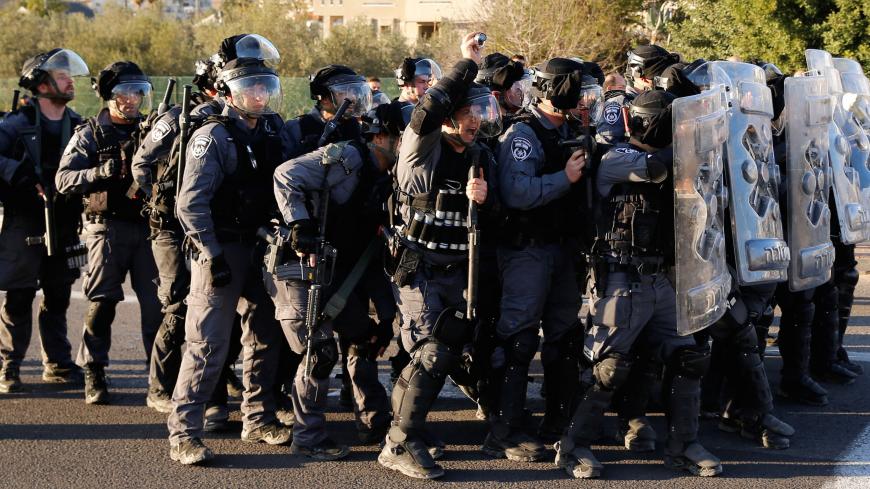 Arab-Israeli protesters clash with Israeli police during a demonstration in the northern Arab-Israeli village of Arara, Jan. 21, 2017. - Reuters/Ammar Awad

Pro-boycott groups landed a significant win last week when two police departments announced they were pulling out of a program that sends US police officers to receive training in Israel.

The Vermont state police and a local police department in Massachusetts have decided to end their participation in a program that sends US police officers to Israel for counterterrorism training following pressure by groups supportive of the boycott, divestment and sanctions (BDS) movement against Israel. Pro-Israel activists in turn have filed a lawsuit against the city of Durham, North Carolina, over a city council statement that decries militarized policing and mentions Israel.

The withdrawals mark a setback for a wide array of programs, sponsored by numerous pro-Israel groups, meant to foster closer ties between US and Israeli law enforcement.

Both the Vermont and Northampton police exchanges were part of a program organized by the US-based Anti-Defamation League (ADL). The ADL says it has sent more than 400 “high-ranking American officials” on these trips since 2004.

The pro-boycott activist group Jewish Voice for Peace has spearheaded campaigns against ADL-style police exchange programs nationwide. Opponents of the programs argue that they encourage law enforcement officers to adapt Israel’s practice of racial profiling in the United States. Opponents have successfully pressured the city of Northampton, Massachusetts, to cancel a planned trip to Israel by its police chief.

“I have a very direct experience with living in a highly militarized society that is an occupying force of another group of people,” Alisa Klein, a Northampton city council member who served in the Israeli military, told Al-Monitor. “Sending [our] police chief to receive training from the apparatus that is responsible for human rights and civil rights abuses and essentially ethnocidal practice on Palestinians was just not something that I want … to be doing.”

But the ADL counters that its program provides US law enforcement agencies with training necessary to combat terrorist threats.

“While we are disappointed in this decision by two police chiefs in our area, we are still immensely proud of our work with law enforcement," Robert Trestan, the ADL New England director, told Al-Monitor in an emailed statement. “The weeklong seminar enables participants to study how Israel works to thwart terrorism within its framework as a democratic and multicultural nation. Participants meet with senior officials from both Israeli and Palestinian law enforcement to learn about the challenges that they face and how they overcome them.”

Although the ADL does not publicize all of the police departments and federal agencies that participate in their training programs, activists with Jewish Voice for Peace routinely file public records requests regarding the program and compile the information on a website titled “Deadly Exchange.”

In addition to the ADL, Jewish Voice for Peace notes that several other Jewish nonprofits facilitate similar police exchanges, including the American Jewish Committee, Birthright Israel, the Jewish Institute for National Security Affairs and the American Israel Education Foundation, a sister organization of the pro-Israel lobby AIPAC. Participants in the program are regular speakers at AIPAC’s annual policy conference in Washington.

The records note that Franks was invited in his capacity as a member of the Armed Services Committee, the chairman of the Missile Defense Caucus and the hard-right Israel Allies Caucus, while Gohmert was invited in his role as the vice chair of the House Judiciary Subcommittee on Crime, Terrorism and Counterterrorism.

ASTI did not respond to Al-Monitor’s requests for comment. Its website notes that police departments can apply for grants from the Department of Homeland Security to participate in the program.

In the wake of the Sept. 11 attacks, Sen. Susan Collins, R-Maine, helped create a Homeland Security office to promote US-Israeli security cooperation. The Donald Trump administration has also sought to bolster law enforcement ties between the United States and Israel.

“Border security is national security,” Nielsen said at the forum. “Our Israeli partners know that better than anyone and I was fortunate today to see the incredible work they are doing to keep their territory safe.”

Trump and Netanyahu have praised each other’s immigration stances, and Trump came out in favor of racial profiling during the 2016 presidential campaign, citing Israel as an example.

And while the ADL is harshly critical of Trump administration’s hard-line immigration policies, activists contend that its exchange programs to Israel enable Immigrations and Customs Enforcement (ICE) and US border patrol agents to further crack down on immigrants and refugees.

“The fact that these trainings are also open to ICE and border patrol opens up this further problem right now under the Trump administration,” Rachel Weber, a Jewish Voice for Peace organizer in Massachusetts, told Al-Monitor. “You saw US forces shooting tear gas canisters and you had family and children at the border last week. It’s really troubling to know that those same forces are training with agencies in Israel that will use snipers with live fire against protesters in Gaza.”

According to media reports and ADL press releases, ICE and US border patrol agents participated in the training programs at least four times between 2010 and 2016.

And earlier this year, the city council of Durham, North Carolina, issued a nonbinding statement expressing the city’s opposition to police exchanges in Israel. The statement “opposes international exchanges with any country in which Durham officers receive military-style training,” noting that “racial profiling and its subsequent harms to communities of color have plagued policing in our nation and in our own community.” The International Legal Forum, an Israel-based, anti-BDS nonprofit, has responded with a lawsuit filed by two volunteer Israeli police officers.

The ADL denies that its programs contribute to the militarization of US law enforcement agencies.

“The characterization that the seminar consists of tactical military-style training with the Israeli military is simply wrong,” said Trestan. “The assertion that American Jewish institutions are responsible for rising levels of police brutality and racism against people of color in the US because of this program is patently false and neither helpful in dealing with the racial challenges facing this country nor in solving the complex Israeli-Palestinian conflict.”

Nonetheless, a 2016 ADL itinerary obtained by Jewish Voice for Peace indicates that US police officers visited Israeli security checkpoints in the occupied West Bank and Gilboa prison, which houses Palestinian prisoners. The itinerary also included meetings with Israeli riot police as well as Alan Moss, the former head of the Shin Bet.

However, Weber of Jewish Voice for Peace noted that the stated reason for the Northampton police chief’s canceled trip was to learn about hate crimes and how to stop them.

The ADL also runs a separate program for federal and state law enforcement agencies to use “the history of the Holocaust as a springboard for examining law enforcement’s role in our democracy.” That program does not involve Israeli security forces.