The recent killing of journalist Jamal Khashoggi has cast a shadow over Saudi Arabia's standing with Western countries, which are now pressuring the kingdom to bring an end to the suffering in Yemen. 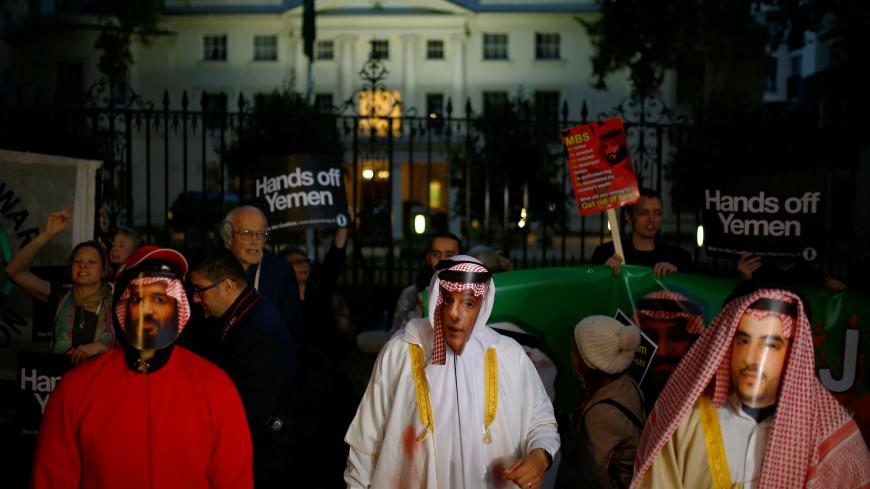 People wearing masks of high-ranking Saudis attend the Stop The War Coalition protest against the killing of journalist Jamal Khashoggi, the war in Yemen and UK arms sales to Saudi Arabia, outside the Saudi Arabian Embassy in London, Oct. 25 2018. - REUTERS/Henry Nicholls

The war in Yemen has been making headlines recently in what is considered a huge shift, given the weak media coverage it's received in the past. This shift is due not only to the growing humanitarian crisis, but also to rising political tensions between Saudi Arabia and the West in the wake of the October slaying of Saudi journalist and Washington Post contributor Jamal Khashoggi at the Saudi Consulate in Istanbul.

The Yemen conflict also drew attention this week as Saudi Arabia halted, at least temporarily, its devastating assault on the strategic port of Hodeidah.

After the war in Yemen erupted in 2015, the UN issued Resolution 2216 that April, demanding an unconditional end to the violence. But the Saudis merely used the resolution to supposedly legitimize its coalition's attacks, designed to help bring back the ousted government to the capital, Sanaa. The following year, US Secretary of State John Kerry proposed an initiative during his last few months in office, calling for a stop to the Houthi rebels’ use of ballistic missiles, forming a national unity government and handing militias’ arms to a third party.

Since then, however, media and political attention to the war otherwise had been sparse and ineffective.

But the situation changed after Khashoggi's death Oct. 2. Much of the West hardened its tone against the kingdom. There has been talk about US and British diplomatic efforts to seek a UN decision to stop the war. Efforts are growing to stop arms sales to the Saudi kingdom.

Germany announced Oct. 22 it would halt its sales, while French President Emmanuel Macron faced an unprecedented wave of criticism following his Oct. 26 statements in which he sought to justify his country's ongoing deals with the kingdom. US President Donald Trump was widely criticized in mid-October for defending a $110 billion arms deal with Saudi Arabia in the wake of angry media and political calls to punish Saudi Arabia for the Khashoggi slaying. Trump stopped mentioning the deal.

Trump, Saudi Arabia's closest Western ally, even attacked the kingdom by saying in a Nov. 4 TV interview that the Saudis have misused US-supplied weapons. He cited a Saudi airstrike that hit a school bus in August, killing 43 people, including 29 children. Also, US Secretary of State Mike Pompeo and Secretary of Defense James Mattis in October called for stopping the war in Yemen.

The United States is the kingdom's key source of arms and could hamper the Saudis' efforts to continue the war. The United States did stop supplying Saudi aircraft with fuel Nov. 10, but didn't halt all intelligence and military support for the Saudis in Yemen.

Until this week, when the Saudis called for a temporary halt to battles for the rebel-held port city of Hodeidah on the western coast, fighting there had been escalating. The port is the main lifeline for millions of Yemenis in need of humanitarian aid. The front lines had been relatively calm for months, before the Saudi-led coalition resumed its campaign to take the port in June, sparking concerns about the worsening humanitarian crisis and fears the port would be destroyed. According to Relief Web, the city's population until June was about 600,000; officials say about 445,000 people had fled from there as of September. The port supplies Yemen with 70% to 80% of its basic food needs. Yemen's total population is roughly 29 million.

Humanitarian concerns increased after the battle in Hodeidah turned into a street war in which forces backed by the Saudi-led coalition took over the city entrances, except for the northern one linking the city to Sanaa. Journalist Bassim al-Jinani of Hodeidah told Al-Monitor that some missiles and weapons fragments were reaching residential areas. Even with the informal cease-fire, the warring parties remain on guard and continue to receive supplies.

In September, UN special envoy for Yemen Martin Griffiths sought to hold negotiations — not for a cease-fire, but specifically to address humanitarian issues, solve the division of the Central Bank and open the Sanaa international airport. Despite this low negotiation bar, the talks never got off the ground in Geneva, as Houthis failed to show up.

On Nov. 13, British Foreign Minister Jeremy Hunt announced Saudi Arabia agreed to allow wounded Houthis to be evacuated on a private Omani jet. This seems to point to the kingdom's intention to halt the war and reduce international pressure on itself. It's also a favorable indicator that new negotiations slated for the end of this month in Sweden will actually take place.

A Yemeni politician told Al-Monitor on condition of anonymity that the upcoming negotiations will focus on the cease-fire and on addressing humanitarian issues to build trust among the parties. Attendees are also expected to discuss frameworks for a sustainable negotiation process about the country's future, security arrangements regarding the militias' retreat from the cities and handing over heavy weapons. He added that the biggest challenge facing negotiators is the fate of the Saudi-backed exiled president, Abed Rabbo Mansour Hadi, and his government.

No settlement proposal can promise results. It's difficult to address the proliferation of weapons and militias. Ending the direct regional military intervention wouldn't necessarily end the increasing meddling in Yemen through local pawns. The regional conflict in Yemen now includes many areas that were relatively remote, such as Al-Mahra governorate in extreme southeast Yemen along the border with Oman.

Clashes and protests against the Saudi presence have been breaking out in the governorate for the past three months as part of the proxy conflict with Oman and Qatar supporting the Houthis on one hand, and Saudi Arabia and the United Arab Emirates supporting the ousted government on the other. Iran is also interfering by supporting the Houthis, who control the capital.