Ankara is pleased with Washington's offer of high bounties for three top Kurdistan Workers Party leaders, but the move won't buy forgiveness for the US alliance with Syrian Kurds. 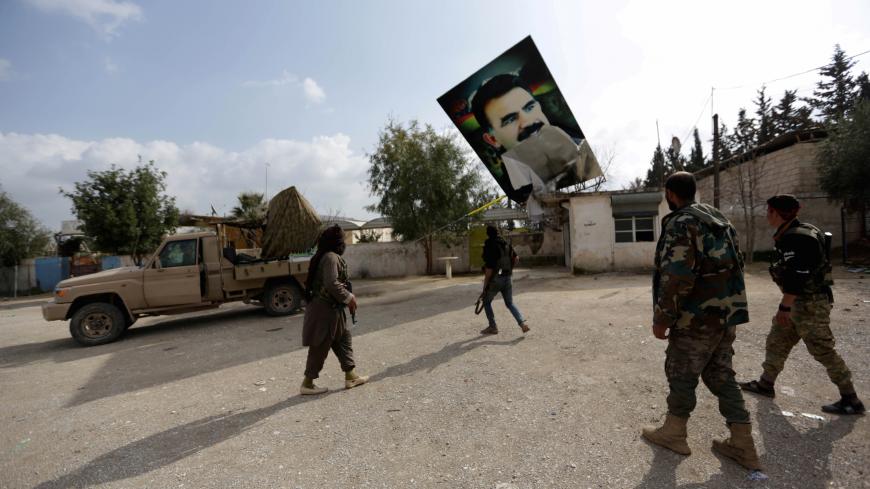 ANKARA -- Turkey has cautiously welcomed the US decision to post bounties totaling $12 million for the three top leaders of the Kurdistan Workers Party (PKK). But it fears Washington may have taken this step against the Turkish Kurd insurgents to make up for its support for their Syrian sister organization, the People's Protection Units (YPG).

The US Embassy said the State Department was offering $5 million for information leading to the capture of Murat Karayilan and $4 million and $3 million, respectively, for Cemil Bayik and Duran Kalkan. Karayilan has led the insurgent group from the mountains of northern Iraq since the PKK's founder, Abdullah Ocalan, was captured in 1999. Bayik cuts a higher profile than Karayilan through his press interviews on PKK strategy.

Turkish Foreign Ministry spokesperson Hami Aksoy said Wednesday the government was pleased by the US decision, but added, “We expect this step to be supported by concrete actions to be made in Iraq and Syria as part of fighting against the PKK and its extensions.”

Aksoy was referring to the fact that the US military works with the Syrian Democratic Forces, a group consisting largely of YPG fighters, in the struggle against the Islamic State group in Syria. Last week, after Turkish artillery bombarded YPG positions in northeastern Syria, the United States conducted what it called “assurance patrols” with the SDF along the Syrian side of the Turkish border.

“The same attitude should be taken against the YPG, which is no different from the PKK,” Akar told NTV. He urged the United States not to provide weapons and ammunition to the YPG, whose fighters have been receiving US arms through their membership of the SDF.

Nicholas Danforth, an analyst at the Bipartisan Policy Center in Washington, told Al-Monitor, “Washington has consistently, if not coherently, sought to assuage Turkish anger over US support for the YPG by offering Turkey support against the PKK.”

“We welcome this decision, but we suspect it has been done to draw a curtain over the US’ engagement with the YPG,” Kalin told reporters. “If that is the case, the truth will come out in a short time.”

Kalin said Washington insisted on classifying the YPG differently from the PKK, but Turkey has told the Americans “time and again” the two groups are organically linked.

The United States and European Union regard the PKK as a terrorist organization, but they do not classify the YPG as a terror group. However, Western analysts recognize the YPG is closely aligned with the PKK, with both groups recognizing Ocalan as their overall leader.

A former Turkish ambassador to Iraq and special envoy to the country’s Kurdish region, Murat Ozcelik, told Al-Monitor it was time for Turkey to change tack on the YPG in the belief that better relations with the Syrian Kurds would inevitably have an impact on relations with Turkish Kurds.

“If we wish to implement a policy that is going to be good for the Kurds in Syria, which would also make our [Turkish] Kurds happy, we have to slowly move towards accepting the fact that the YPG is a force in Syria that should be reckoned with,” Ozcelik said, adding both Russia and the United States had relations with the Syrian Kurdish militia.

Ozcelik said the YPG had a reputation for expelling its opponents, such as Arabs and supporters of the Kurdistan Democratic Party of Iraq, from northern Syria, and that Turkish negotiators would have to discourage it.

“Unfortunately, Turkey has been implementing an ‘Arabist’ policy, always favoring the Arabs over the Kurds. If Turkey were to arbitrate between the Arabs and Kurds in Syria, it would be in a much better position,” he said. “Once Turkey had developed a working relationship with the YPG, it could try to deal with the PKK in a different way.”

On the domestic front, Turkish legislators all but came to blows at a meeting of the parliamentary committee on health, family and social security. The ruling Justice and Development Party (AKP) of President Recep Tayyip Erdogan has proposed an omnibus bill that contains a clause endorsing the dismissal of thousands of doctors and nurses who lost their jobs during the civil service purge after the coup of 2016.

When AKP legislators and their allies in the Nationalist Movement Party approved the clause on Tuesday, pandemonium broke out. NTV and CNNTurk screened footage of opposition legislators yelling and shoving the bill’s supporters, with the committee chairman unable to restore order.

The chairman of the Ankara Medical Chamber, Dr. Vedat Bulut, said a total of 3,383 doctors had received letters during the purge reading, “You are possibly a member of a terrorist organization.” Like the notices received by more than 100,000 civil servants, the letters do not name the terrorist organization nor give any evidence of such membership.

“They are purging people as terrorists. It is not a court decision. It is just an intelligence report,” Bulut told Al-Monitor.

The government has set up an appeal process but very few civil servants have managed to regain their jobs.

Bulut said the dismissed doctors usually found their passports had been cancelled as well. Doctors who wished to work abroad or travel to medical conferences had their passports confiscated at the airport.

The hardest hit were the 1,417 young doctors who received these letters shortly after graduation. The letters meant they would not be able to conduct their mandatory service in a state hospital, so the government had effectively impounded their medical qualifications.

Bulut scoffed at the letters' accusations, saying, “You cannot do terrorist activity with a stethoscope.”

An opposition legislator said that including nurses and paramedics, the total number of medical personnel thrown out of work reached about 7,500.

Bulut said he expected parliament to pass the bill, but the Turkish Medical Association would appeal to the Constitutional Court and, if necessary, to the European Court of Human Rights. He cautioned, however, that a favorable decision from the court in Strasbourg “could take four years.”