Intel: Why Washington is putting a bounty on Kurdish insurgents 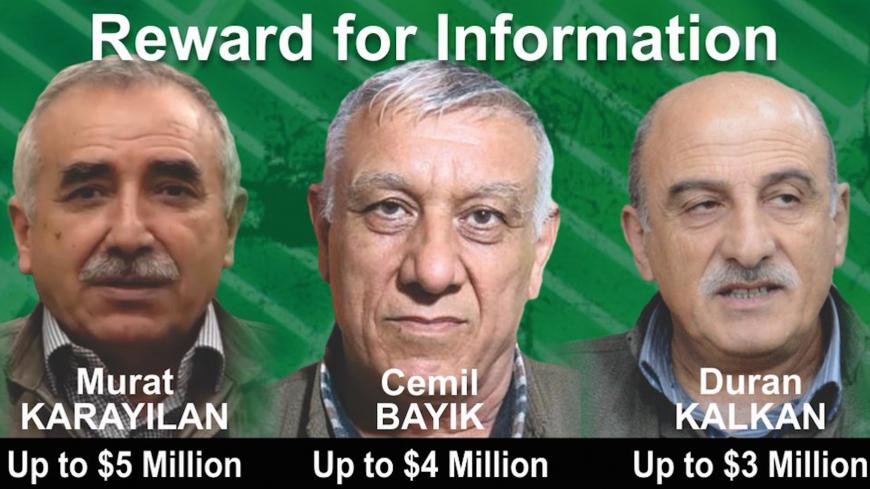 Image created by the US State Department's Reward for Justice program with information on rewards for three PKK leaders. - US Department of State

The United States announced today that it is placing multimillion-dollar bounties on three leaders of the Kurdistan Workers Party (PKK), a Kurdish insurgent group.

During a visit to Turkey today, Deputy Assistant Secretary of State Matthew Palmer announced that the State Department’s Rewards for Justice program is offering money for information leading to the capture of the fugitives. The State Department has put the bounties at $5 million for Murat Karayilan, $4 million for Cemil Bayik and $3 million for Duran Kalkan.

Like Ankara, Washington has designated the PKK as a terrorist organization for more than a decade.

Why it matters: The US military alliance with the People’s Protection Units (YPG), a Syrian PKK affiliate, to fight the Islamic State (IS) in Syria has outraged Ankara. After the Turks ousted the YPG from Afrin earlier this year, Ankara and Washington reached an agreement to forestall a similar offensive in Manbij by reaching a compromise to jointly patrol the city. But in recent days, Turkey has resumed shelling YPG positions in northern Syria.

“Washington has consistently, if not coherently, sought to assuage Turkish anger over US support for the YPG by offering Turkey support against the PKK,” Nicholas Danforth, a senior analyst at the Bipartisan Policy Center’s national security program, told Al-Monitor. Danforth added, "With Turkey putting increased pressure on the YPG and expressing frustration with progress on the Manbij roadmap, this looks like one more US effort to calm Ankara without offering further concessions in northern Syria.”

What’s next? The United States has said that the renewed Turkish attacks on its Syrian Kurdish allies have detracted from the fight against the remnants of IS. With frosty relations slowly thawing after the release of US pastor Andrew Brunson, it remains to be seen whether today’s announcement will be enough to assuage Ankara’s concerns.