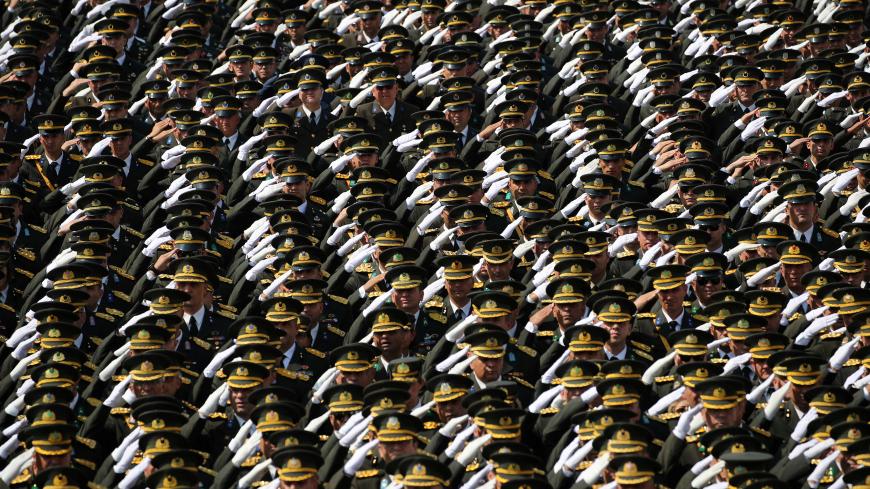 Turkish Minister of National Defense Hulusi Akar recently discussed the new paid conscription program colloquially known as “bedelli askerlik,” which roughly translates as “paid military service,” with the state-run Anadolu Agency. A law passed in July granted a one-time opportunity for men to complete their compulsory military service in just 21 days if they pay 15,000 Turkish liras (about $2,840) before Nov. 3.

Akar said 634,415 men had applied for the program, in which 37 classes will serve through February 2020. The program has processed three classes since August.

But “pay to serve less time” schemes, of which five have been implemented from 1987 until 2014, are controversial in Turkey. The programs worsen the divide among the country’s “haves” and “have nots” and undermine unit morale. The Turkish Armed Forces (TSK) high command looks down on such programs. Especially during the TSK’s struggle with the Kurdistan Workers’ Party in the 1980s and 1990s, in which units composed of conscript soldiers did much of the fighting before they were professionalized in the 2000s, such discrepancies created a sense of injustice. Today, the new “bedelli” program could threaten the TSK’s hard-earned prestige that it recovered with difficulty since the failed coup attempt of 2016.

Durations for mandatory service are already inegalitarian in Turkey, where all men above the age of 20 who are physically and mentally fit (and apparently heterosexual) are expected to serve between six to 12 months. Graduates from four-year programs at institutions of higher learning serve either as privates, corporals or sergeants for six months or as commissioned officers for 12 months. Those with two-year college degrees and below, however, must serve 12 months as privates, corporals or sergeants. (The latter category had to serve for 15 months until 2013.) Deferments and exemptions are widely available for those enrolled in college or graduate school or if one suffers from an illness. Turkish nationals who have worked abroad for at least three years or have dual citizenship could pay 2,000 euros ($2,256) without serving.

The system has suffered worse problems. Before TSK-run hospitals were placed under the Ministry of Health in 2016, a small number of military physicians would prepare fake reports to enable otherwise fit people to receive medical exemptions. Meanwhile, conscientious objectors often suffered judicial punishment because successive governments never instituted a civilian national service program for those who do not wish to serve their country but not by wearing a uniform.

All this shows the sense of injustice that revolves around military service in Turkey. While many middle-class men await a round of “bedelli” in order not to spend their most productive years in the military, other Turkish young men who do not have access to education and/or the means to pay their way out bear the brunt.

A young man who served as part of the latest “bedelli” program expressed his awareness of these concerns in an electronic message to Al-Monitor. But he decided to take the opportunity for the “bedelli” because “I wanted to complete my national service to return to my professional and educational life.” The man emphasized that his superiors made a point of not discriminating against or favoring the “bedelli” soldiers. “I can say our three weeks were filled up with many subjects. We received training in drilling, standing at attention, night maneuvers, distance and targeting, firing and physical exercise.” Nevertheless, he admitted that he “did not possess sufficient level military knowledge” to comment on compulsory military service — even after his 21 days in the TSK.

According to military historian Mehmet Besikci, the “professional vs. conscription” debate is necessary. In an email interview with Al-Monitor, Besikci wrote how conscription ensured numerically superior, young and dynamic militaries until the middle of the 20th century. In addition, these mass militaries “made it easier for the military-political-cultural indoctrination of youth in an age when primary education and means of mass communication were weak.” Besikci added however, “Since World War II, mandatory military service could not offer advantages. Versatility and high quality, rather than mere standardization, have become the main determinants of military technology.”

The good news is that TSK leaders and civilian governments have been heeding the calls for professionalization for some time. Although an all-volunteer, fully professionalized TSK is not in the cards, since the late 1990s, the Turkish military has boosted its ranks with officers, noncommissioned officers, specialists and professional enlistees who serve on a contract between three to nine years for full salary and benefits and retain the option of becoming tenured — potentially serving for as long as any graduate of service academies. As a result, approximately 50% of the present-day TSK, with a force of about 350,000 troops, is composed of professional personnel and the remainder are performing their compulsory service. (That figure does not include the 176,000-strong Gendarmerie, the paramilitary domestic security force that is subordinated to the Interior Ministry in peacetime.)

To be sure, Turkey is not the only country that is grappling with mandatory military service. Russia has sought to end conscription since its 2008 war against Georgia. Ukraine, which has faced Russia’s wrath since 2014, reinstated the draft. Sweden, too, reintroduced compulsory military service in 2017 as a result of Russian actions against Ukraine and growing tensions in the Baltic region.

Conscription, of course, still has its supporters. Developed countries with critical national threats and multiyear service durations, such as Israel and South Korea, are unlikely to send their young men (and women, in Israel’s case) home any time soon. In a referendum in September 2013, the people of Switzerland overwhelmingly voted to keep compulsory military service, which lasts about 18 weeks.

Turkey probably will maintain its current position regarding conscription. In a series of electronic messages with Al-Monitor, a retired Turkish army colonel indicated that Turkey should go in Switzerland’s direction. Echoing Besikci’s ideas, the colonel said, “Our country’s geopolitical situation necessitates a strong military [but] the meaning of a strong military has changed with technology. Numerical superiority is certainly a factor, but [a military’s] true strength lies in maneuverability.”

The retired officer added how full professionalization would boost the TSK’s public image: “If we consider the ties and love between the nation and the military, I think the military should be professionalized rapidly. ‘Bedelli’ hurts a large portion of society” that does not have the means to buy their sons’ way out of the military.

But the colonel added that “basic military training with a single duration of 16 to 18 weeks for everyone” should be of help to mobilize a large force in a national emergency. He expressed skepticism with respect to the latest “bedelli” program. “I mean, 21 days of ‘bedelli’? What are you going to teach [those 21-day conscripts]?”

But transitioning to a fully professionalized military, with a steady stream of conscripts undergoing basic training, would not be easy. Much like the retired colonel, Besikci thinks the debate should go beyond abolishing conscription, and just paying professionals to do the job. One problem, according to Besikci, is that Turkey “has no serious preparation for a [fully professionalized military] and does not know how to replace [conscription]. … Professionalization by paying an unemployed young man a salary is not easy. It should incorporate training, a career plan, an insurance scheme that covers the soldier as well as their family. … In other words, [professionalization] shouldn’t be just about a contract.”

On a personal note, as someone who only served for six months back in the day, I benefited immensely from meeting a diverse set of people from across Turkey. While it was clear that not all of us conscripts belonged in the military (nor did some of our supposedly “professional” superiors, for that matter), a national service program that caters to the country’s needs by employing young people in useful programs — be they in social and environmental work, health care, teaching and, yes, defense — may contribute to the declining sense of national unity and purpose that is so prevalent in Turkey today.