Turkey to end draft — for those who can pay 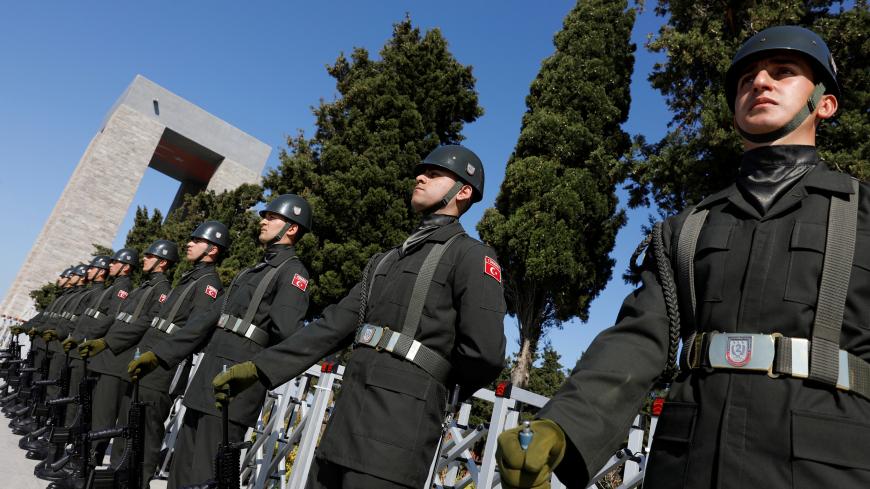 Turkish soldiers stand in front of a memorial during an international service marking the 103rd anniversary of the World War I campaign, Gallipoli, Turkey, Apr. 24, 2018. - REUTERS/Umit Bektas

Change is coming to the Turkish military, and not necessarily for the better.

The government is reexamining the structure of the Turkish Armed Forces (TSK) in the wake of the failed 2016 coup. The ruling Justice and Development Party (AKP) is introducing major changes to the law that regulates compulsory military service.

The law has been in place since 1927. Since then it has undergone mostly cosmetic changes on service duration and payment, as required by changing circumstances. In Turkey, conscription is taken seriously by the state and the people, and military law is considered one of the fundamental, immutable laws of the country.

The law was set to undergo some important changes before the March 31 local elections, but their enactment was delayed for undisclosed reasons. As the matter concerns millions of people, all eyes have been on the process.

Now that the elections are over, proponents of the bill want the parliament to approve the changes quickly, before the June 23 redo of the Istanbul local election. The haste prompts some observers to wonder if the AKP government sees the new bill as a means to curry favor among young male voters.

According to the bill, which has already been approved by parliamentary committees, paid exemption from compulsory service will become a permanent fixture rather than an occasional measure. Unsurprisingly, the law would also expand the powers of the president by introducing a reserve non-commissioned officer class that offers exemptions to policemen, teachers and doctors who serve in some remote parts of the country.

Compulsory military service would be reduced to six months from the current 12. Soldiers who complete six months may ask to extend their service for another six months. For service beyond the first six months, for which they receive a nominal stipend, the soldiers will be paid $320 per month.

Although Defense Minister Hulusi Akar said the law will merely simplify the military system and was prepared in accordance with national interests, its provisions will actually complicate things considerably.

The new law would seriously shrink the ranks of the Turkish army, which currently has some 470,000 personnel. If parliament approves the bill, 140,000 conscripts will be discharged in next three months.

In response, the military will try to fill the void with contractors, but young men's interest in these job opportunities are unlikely to meet lawmakers' expectations. The Turkish military is already having problems recruiting personnel for combat units, especially in commando brigades responsible for fighting terrorism and in cross-border operations.

The bill is already drawing strong criticism from several corners, including retired officers, for many reasons.

For one thing, the law would unduly complicate the conscription system and be hard to implement. Also, critics say the law would scrap the military service that is defined as “the right and duty of all Turks” in Turkey’s constitution and make it a profession that those with money can avoid. Making military service a paid profession, critics say, would seriously damage the principle of equality in service, as only the poor and uneducated segments of the population would be required to serve. All this would affect the TSK's morale and quality. Many also object that six months is too short for training and won't ensure the military's combat capability.

One article of the new law is particularly controversial in many quarters: It says the president will determine who will serve. Whether in peace or at war or somewhere in between, anyone the president deems to be serving an essential role will be exempted from military service. The article is an unclear, arbitrary stipulation that has no place in the laws of a democratic country, as it gives the president the authority to grant immunity from military service to anyone he wants, without justification parliamentary approval.

In short, the opposition says the proposed law would weaken the military, disrupt the principles of equality among those due to enter service, give the president extraordinary powers to directly intervene in the military system and weaken the parliament's checks on the power of the presidency.

The government sees the new law as an opportunity to have an all-voluntary and fully professional military at its disposal. The TSK has been working since the early 2000s toward having such a force. But the opposition points to the military's near-sacred place in Turkish history, the likelihood of weakened operational effectiveness of foreign policy at critical periods, the arbitrariness of the system and the untenable insertion into the system of a president affiliated with a political party.

It's now clear that the future of the military system, which closely concerns millions of young Turkish men and their families, will continue to be debated with increasing politicization.