$8,700 will let young Turks 'buy out' their military service

The Turkish government's unexpected decision to let conscripts pay off compulsory military service has military leaders worried, as tens of thousands of young men stand to take advantage of the chance not to join up. 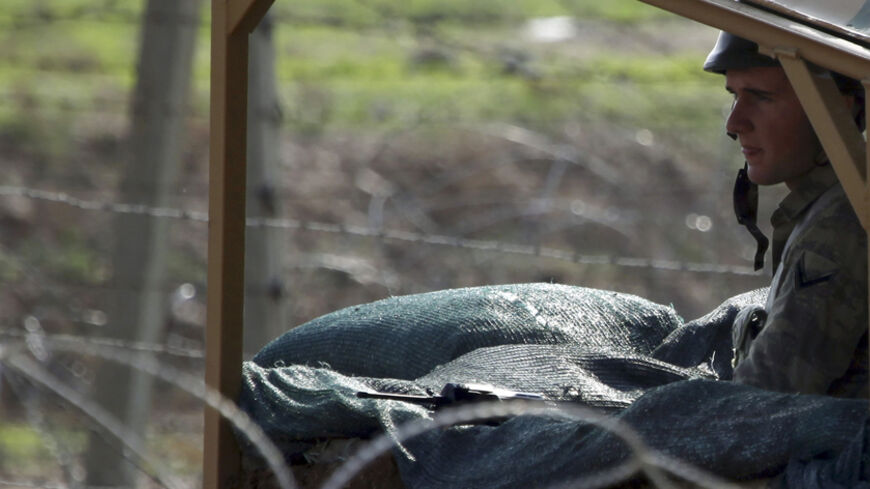 A Turkish soldier takes position near the border with Syria as seen from the Turkish border town of Ceylanpinar, Sanliurfa province, Nov. 24, 2012. - REUTERS/Amr Abdallah Dalsh

When the topic is compulsory military service in Turkey, everybody listens. Every year, in batches, about 700,000 young men are enlisted for 12 months of what is called “national service” by the constitution. A small number of them are university graduates, who are enlisted for six months. A similar number are discharged each year after completing their compulsory service. It is therefore no wonder that anything to do with this service is of interest to millions of people.

To properly understand the issue, some statistics are needed. According to the Stockholm International Peace Research Institute, Turkey's military is made up of about 600,000 people. This number includes about 195,000 in the gendarmerie and 5,000 Coast Guard personnel. About 350,000 of the total — 60% — are conscripts. When conscripts outnumber professional cadres, the result is called a “mass army." In that sense, the Turkish military is similar to those of Iran, Egypt, Algeria, Armenia, Azerbaijan and Israel. One must remember, however, that there are about 230,000 professional noncommissioned officers and specialists in the Turkish military. When compared with other modern Western countries, the number of commissioned personnel in the Turkish military is relatively high. Turkey’s defense expenditures in 2013 came to $18 billion. That means that each Turkish citizen was spending about $200 each for defense.

A bombshell about Turkey’s compulsory military service hit last week when Prime Minister Ahmet Davutoglu announced that it will once again be possible to buy exemption.

According to the government decision that was rushed to the parliament for enactment, about 700,000 young men aged 27 and above will pay the state $8,700 each to buy out their service and be exempted. If all the qualified men apply, the state could generate a revenue of $5.7 billion. The bill was approved by the parliament in a 3 a.m. vote Dec. 10.

This will be the fifth time that such a deal has been offered on military service. In 2012, the offer made to men 30 and older cost $13,300 per person, a relatively steep price in Turkey, and only 70,000 people applied.

Experts estimate that with an amount set to appeal to the middle-income group, about 250,000 young men will pay, meaning that in January, the state coffers will rake in a revenue of $2 billion.

But what about the statements repeated only a few months ago by Davutolgu and President Recep Tayyip Erdogan that the scheme was not on their agenda and that they didn’t approve of selling off military service?

Why did the Justice and Development Party (AKP) come out with the scheme so unexpectedly, without allowing a debate, and hastily sent the bill to the parliament?

There are three possible answers. The first is the approaching general elections scheduled for June. The AKP could have seen such a popular move, which concerns hundreds of thousands of young men and their families, as an election investment.

Then there is the view that it is some kind of cure to lower the current deficit and inject a new blood into the Turkish economy before the elections. There seems to be some justification for this view because such projects are already in motion. Many banks began advertising 36-month credit lines for 18,000 liras ($8,700).

Tens of thousands of young men who had houses, cars or gold began selling them to pay for their service, injecting life into the economy before the elections.

According to retired Maj. Gen. Ahmet Yavuz, the issue is related to the solution process with the Kurdistan Workers Party (PKK). Yavuz says the government may be thinking that it won’t need many soldiers in Turkey’s east and southeast, depending on the PKK's concessions.

But while the government's decision to sell off military service may have delighted the young men who will benefit and their families, not everyone was happy with it, primarily the generals who were once identified as the true owners of the country. Although the military publicly says, “We respect the government’s decision,” it actually feels it was not properly consulted and its warnings unheeded. There have been many media reports that the decision was made without consulting the chief of general staff, and this has disturbed the military.

Davutolgu responded quickly to such criticism attributed to the military. He criticized the media reports in strong language, snapping, “Our chief of general staff is attached to the Prime Ministry. Military sources don’t have to speak to newspapers to express their concern on any issue.” Many commentators interpreted this as a strong rebuke.

Although Davutoglu appears to have scored some points with his firm response, the law is on the side of the angry generals. According to Turkey's Law on Military Affairs, the Ministry of Defense determines each year the number of soldiers to be recruited according to the requirements of the chief of general staff. If the number of new soldiers available is more than that specified by the chief of general staff, only then does selling off military service emerge as an option. But today, the available recruits meet only 70% of the needs of the Turkish Armed Forces and in many units, manpower is at 60%. So it is not far-fetched to say that the sudden introduction of the scheme is not based on technical requirements but on populist designs, and this is why the military is upset.

And not only the military. Another segment of the population opposes the buyout scheme, claiming such a practice will harm the principle of social equality. They say compulsory military service, which is a constitutionally required duty, should not be an item that the rich can buy out of and the poor cannot. Many fear that the buyout scheme will deepen societal rifts in the country.

Another objection comes from those who say the frequent application of the buyout scheme will impair the discipline, morale and motivation of the military and in turn, its combat performance. Adherents of this view say that because of current developments in Syria, Iraq and Ukraine and the fragile solution process with the Kurds, Turkey needs a strong army today.

Another objection to the scheme is that it weakens the links between the people and society. On the eve of the approaching general elections, Turkey has become accustomed to starting each week with a new popular agenda item. On one side there is the AKP government's surprise move to boost its votes, and on the other are the Turkish generals, who are concerned with filling their ranks. But should the military really worry so much?

Not necessarily. According to Article 117 of the Turkish Constitution, the Council of Ministers is responsible for preparing the military to defend the country. So what the soldiers should do is simple: incessantly remind the Turkish public that contrary to what they may believe, it is the Council of Ministers that will be held responsible for any weakness in national defense caused by the buyout scheme.