Turkey's Finance Ministry, Moody's have opposite views on economy's direction

Moody's sees the Turkish economy as likely in recession, while Erdogan's son-in-law says positive results are on their way. 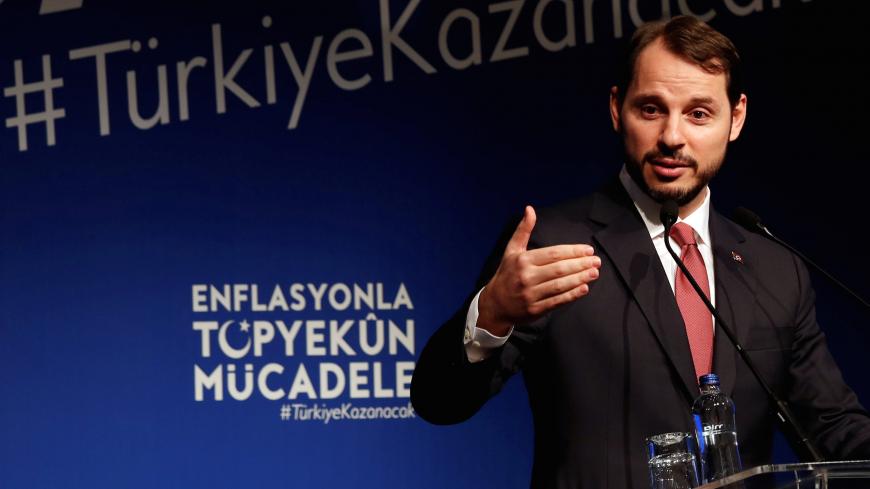 ANKARA, Turkey — Finance Minister Berat Albayrak gave an upbeat picture today of his efforts to defeat inflation, which hit 25% this week — its highest level in 15 years. But his rosy forecast was challenged by Moody’s rating agency, which said Turkey was on the cusp of recession.

“We have started to annihilate the effects of inflation on our economy. We will continue to obtain stronger results with stronger measures,” President Recep Tayyip Erdogan’s son-in-law told business executives in the northwestern city of Bursa.

Bayrak said companies had responded to his call for 10% discounts on goods impacting inflation, and “in November and December we will get more positive results as price rises will decline.”

Referring to Turkey’s long-running battle with balance of payments, he said, “There will be a decline in the current account deficit, and there might be a surprise at the end of the year.”

Indeed there could be a surprise. Hours before Bayrak spoke, Moody’s released a report on the global economy that said, “Turkey’s economy has likely entered recession.”

Moody’s said the Turkish economy had deteriorated rapidly in the third quarter when the Central Bank had to raise interest rates by 6.25% as the lira had lost 40% of its value against the dollar since Jan. 1.

By contrast, the International Monetary Fund’s World Economic Outlook said last month that Turkey’s economy would grow by 3.5% in 2018, followed by a mere 0.4% in 2019.

However, Moody’s foresees a recovery in 2020 when the economy should grow by 3%.

Another argument about Turkey’s direction erupted today after an opposition parliament member proposed that minarets should deliver the call to prayer, the "ezan," in Turkish rather than Arabic, and that readings of the Quran in mosques should also be in Turkish.

“Let the ezan be in Turkish so I can understand it. Let the Quran be read in Turkish [in the mosque],’’ Ozturk Yilmaz of the Republican People’s Party (CHP) said on a Wednesday evening talk-show on Haber-Turk TV.

Yilmaz, a former diplomat who was held hostage by the Islamic State in Iraq in 2014, said his rationale was, “Let my language be spoken everywhere.”

But he provoked a storm of reaction, including from his own party.

Abdullatif Shener, a CHP legislator for the conservative city of Konya, said Yilmaz had chosen the wrong issue.

“This topic has been closed since 1950,” Shener said, referring to Prime Minister Adnan Menderes, who came to power in Turkey’s first multiparty elections that year and ruled that mosques should revert to reciting the ezan and Quran in Arabic.

Ataturk, who founded the republic in 1923 and governed until his death in 1938, and Ismet Inonu, president from 1938 to 1950, believed that religion should be practiced within strict secular boundaries. They saw mosques using the Turkish-language as part of their strategy of making Turkey compatible with the modern world.

However, conservative Muslims never accepted Ataturk’s changes. For them, the Quran is the word of God and it is written in Arabic. Today, Turks can buy Turkish-language Qurans in bookshops and read them in their homes, but in houses of worship, the voice of God must be in the original language.

A stalwart of the ruling Justice and Development Party (AKP) and former Deputy Prime Minister Numan Kurtulmus expressed this view today. “The Turkish-language ezan is a black mark in the memory of Turkish people,” he said, adding, “The dark memories of people should not be resurrected.”

Presidential spokesman Ibrahim Kalin said Yilmaz’s proposal showed that CHP members “have not forgotten their single-party fantasies.” He was referring to the fact that the CHP, as Ataturk’s party, ruled the country unchallenged until 1950.

An interesting fact is that when the new Menderes government proposed legislation for the ezan to be declaimed in Arabic, the CHP legislators did not object.

The CHP executive was obviously unhappy with Yilmaz’s idea. It ordered him to appear before a disciplinary committee on grounds of having appeared on a talk show without party permission.

One story that appeared in Turkish papers this week touched many people for its sense of humanity.

A Bulgarian lawyer, Iliya Zhekov, 26, suffered a brain hemorrhage while visiting Istanbul last year and died in hospital. The hospital authorities asked his parents if they would donate his heart. They agreed, and Zhekov’s heart was transplanted to a 27-year-old Turkish man, Hakan Ok.

This week, Zhekov’s parents visited Ok. They met at Istanbul's Kartal Koshuyolu High Specialization Training and Research Hospital, where the transplant had been performed. According to the reports and photographs published of their meeting, Ok had no reservations about allowing his donor’s mother, Plamena Zhekova, to put a stethoscope to his chest so she could listen to the beat of her son’s heart.

“I had a young and handsome son who died. From the day of the donation, I have been wondering about the recipient. I prayed for his health every day,” Zhekova told the press.

Ok said he was fortunate. “I am grateful to the donor’s family. They gave me a new life,” he added.

Ok spoke of his nerve-wracking wait for a new heart, hoping one would arrive before his existing heart collapsed.

“I have a son and a wife. It was very hard to wait. Organ donation is very important. I lost friends while waiting for the donation,” he said.