Fuat Avni, the handle of an anonymous Twitter user who has successfully revealed President Recep Tayyip Erdogan’s moves in the past, just issued another explosive prediction. 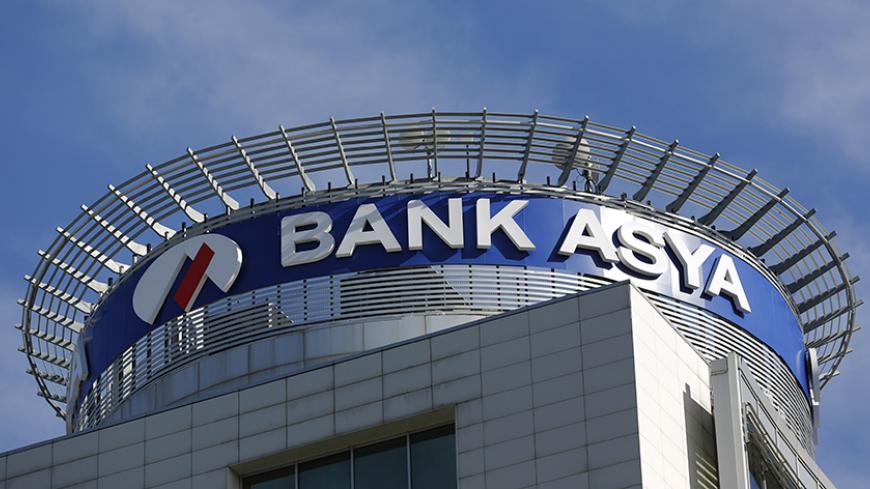 Then they came for Is Bankasi. If we are to believe Turkey’s “Deep Throat,” Fuat Avni (the handle of an anonymous Twitter user), the ruling Justice and Development Party (AKP) plans to take over Is Bankasi, the country’s largest bank, for alleged embezzlement.

More explosive is Avni’s claim on Twitter that the main opposition group, the Republican People’s Party (CHP), will be taken to the Constitutional Court and shut down for its purported role in the embezzlement.

For many Al-Monitor readers, this may not seem like news. Last month, Turkey’s regulatory agency, the Savings and Deposit Insurance Fund, took over Bank Asya for its affiliation with the Fethullah Gulen network. On Feb. 9, Al-Monitor columnist Mustafa Akyol wrote how, despite experts’ dire warnings that lowering interest rates could spin inflation out of control, President Recep Tayyip Erdogan and the AKP government keep forcing the Central Bank of Turkey to lower interest rates. The government’s meddlesome approach to banks and the economy in Turkey, in other words, appears like the story of yesteryear.

But Is Bankasi is not just any bank. It is one of the oldest financial institutions in Turkey, and perhaps its most prestigious. Founded in 1924 on orders from President Mustafa Kemal Ataturk — Celal Bayar, the bank’s first general manager, would himself become president in 1950 — Is Bankasi boasts a proud history filled with dynamism and innovation. It was the first bank in Turkey to introduce ATMs in the late 1980s and Internet banking in the 1990s. Is Bankasi’s trademarked term for an ATM, “Bankamatik,” has been so catchy that many Turks still call all ATMs “bankamatik.” Beyond banking, Is Bankasi subsidiaries compete in such sectors as glass-making, insurance and telecommunications.

Is Bankasi is peculiar for another reason. The CHP owns more than a quarter of its stocks — though the opposition party has donated all of its profits to the Turkish Language Association and the Turkish Historical Association since Ataturk’s death in 1938.

So here’s the rub: Avni says Erdogan’s “plan is to petition the Constitutional Court and close down the CHP” by accusing its officials of diverting funds from Is Bankasi to party coffers. According to Avni, under the original plan, the pro-AKP media were to fire the first salvoes against the CHP and Is Bankasi by alleging that people’s money was being “siphoned off.” Erdogan, says Avni, wants to destroy CHP’s reputation, secure 400 seats in parliament for the AKP in the June 2015 general elections and amend the constitution to secure a much more powerful presidency for himself.

The claim and its reasoning may seem outlandish, but I asked experts to weigh in. After all, Avni has been more right than wrong so far.

Cenk Sidar, president and CEO of the consultancy firm Sidar Global Advisors in Washington and a likely candidate for member of parliament on the CHP list in June 2015, told me that the allegations were part of an AKP “mudslinging” campaign against the opposition. “Their lies don't even have a rational aspect anymore,” Sidar said, adding, “taking over Is Bankasi would completely destroy the already damaged trust in [the AKP’s] management of the economy.”

A senior banking executive had a more troubled tone. The veteran banker with four decades of experience spoke to Al-Monitor on condition of anonymity, stating that he “did not know” whether Is Bankasi would be taken over, though “it will not, could not, should not happen.”

Meanwhile, friends and acquaintances employed at Is Bankasi, where I worked for a year in the late 1990s, did not want to say too much. They pointed out that Is Bankasi's pension fund owns more than 40% of their bank’s shares, which have lost value at the Istanbul Stock Exchange for the past week. The bank’s employees are hesitant to appear in the headlines for the wrong reasons and risk their personal futures or that of their employer's. When members of the press asked for comments, Minister of Economy Nihat Zeybekci called the claims “speculation” and gave a boilerplate response about Is Bankasi’s importance for the Turkish economy and how such allegations could not erode its status.

The political and legal angles of the Is Bankasi-CHP story are even more puzzling, because the Turkish Constitution does not say much about a political party that siphons off public money. (Of course, that’s a good thing for the ruling AKP, which is dealing with even bigger corruption allegations.) The constitution does have provisions against parties that are centers of “reactionary or separatist activity,” but embezzlement does not warrant closure. Professor Ergun Ozbudun, Turkey’s leading constitutional jurist, told Al-Monitor that “the claims [against Is Bankasi and the CHP] have no constitutional basis,” and called the news “mudslinging.”

So, is Erdogan conspiring against Is Bankasi and the CHP?

Any rational observer will tell you that no government would risk its country’s future by a dual takeover of its largest bank and the opposition party. But the problem is not so much whether Erdogan and the AKP government would take over Is Bankasi; it’s that the Turkish president and his party have taken such extreme measures to protect themselves in the past — firing prosecutors and police chiefs, imposing media blackouts, forcing journalists to resign and, yes, taking over a bank — that the idea of seizing Is Bankasi and the CHP do not seem so unthinkable anymore.