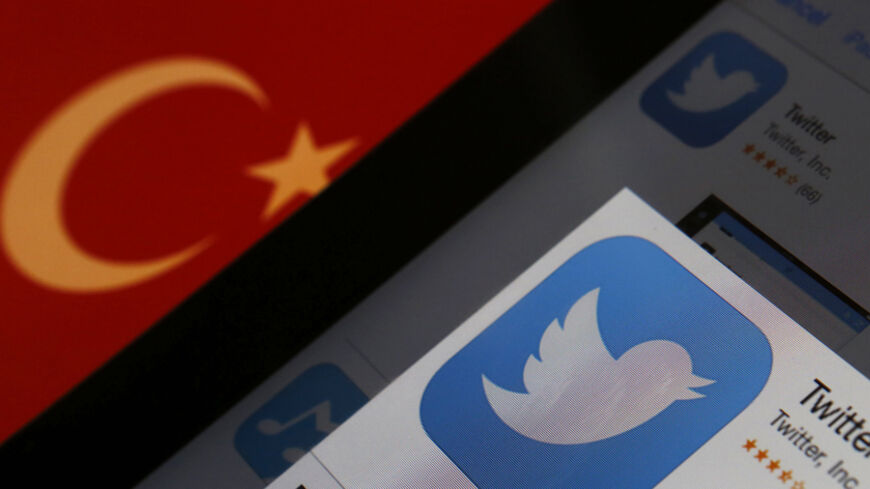 A Twitter logo on an iPad display is pictured next to a Turkish flag in this photo illustration taken in Istanbul, March 21, 2014. - REUTERS/Murad Sezer

Fuat Avni, a pseudonymous account on Twitter, became a household name in Turkey after the December 2013 graft probe that put the government under a judicial spotlight. It emerged along with two other pseudonymous accounts — Haramzadeler333 and Bascalan — that both leaked audio recordings allegedly revealing the dirty network of then-Prime Minister Recep Tayyip Erdogan and his inner circle. Fuat Avni contented itself with only writing tweets containing insider information.

The Turkish media started to follow these tweets in parallel with Erdogan’s vow, in reaction to the corruption and bribery saga, to root out all followers of US-based Turkish Sunni cleric Fethullah Gulen from state institutions.

There was a general belief in the media that these Twitter accounts were somehow, if not directly, linked to the Gulen movement.

Although there has been plenty of speculation about Fuat Avni's true identity, the tweet sent out from this account on the night of Sept. 8 portrayed Fuat Avni as a government insider. “I have been of two minds for hours now because there are only a few advisers who know about this,” the author tweeted. “I studied the decisions soon to be presented to [the president]. This may reveal my true identity, but the interests of the country come before anything.”

The tweets claimed that Ali Babacan, minister in charge of economic affairs, on the evening of Sept. 8 until the late hours held a “critical meeting with his top bureaucratic advisers.” Among a long list of 140-character tweets, Fuat Avni wrote: “Babacan betrayed the economy. They agreed on closely monitoring 10 banks that are in a more difficult position than Bank Asya and this is all done to take over Bank Asya.” Bank Asya, Turkey's largest Islamic lender, is linked to the Gulen movement.

These tweets immediately affected the money market. Ugur Gurses, Radikal daily’s economic affairs columnist, wrote Sept. 10: “While the US dollar to Turkish lira exchange rate yesterday [Sept. 9] reached almost 2.20, the money markets got concerned due to the tweets sent out from the Twitter account ‘Fuat Avni.’ … The reason is that 10 banks will start being monitored by the Banking Regulation and Supervision Agency (BDDK). It will be very dangerous to draw the Turkish banks into political warfare while the global economic outlook still looks gloomy. The ordinary citizens on the street only care about the outcome.”

However Fuat Avni presents the author's true identity, it certainly continues as a pseudonymous account. But the Turkish media began to speculate on the tweeter's identity. Even outgoing first lady Hayrunnisa Gul and government spokesman Bulent Arinc were teased about being Fuat Avni's secret identity while they both were losing popularity inside their own party circles.

Fuat Avni’s account was frozen in August 2014 by a Turkish court order soon after a last tweet stated there would be a second wave of operations “targeting police officers from the Istanbul branch of intelligence,” and that “a total of 32 police officers are to be detained in the operation. Fabricated and mandatory investigation files are ready.” That indeed happened, and when Fuat Avni reactivated a Twitter account under yet another, similar pseudonym, “FuatAvniFuat,” the tweets drew even more followers. The media could no longer disregard the allegations.

Although there is no public information about the Justice Ministry appealing to the courts to renew yet another block of this Twitter account, everyone is still talking about it.

Fuat Avni was not uploading any audio or visual data, like Haramzadeler333 and Bascalan, but it nevertheless became an equally influential social media player. Just ahead of the March 30 local elections, the Turkish government even blocked access to Twitter in Turkey, showing absolute disregard to any international warning that such a ban would adversely affect Turkey’s image — at the very least.

Haramzadeler333 and Bascalan went offline afterward — unlike Fuat Avni, which continues to tweet. While it is unlikely for the government again to take similar steps by blocking complete entry to Twitter from Turkey by giving national security as an excuse, it is possible that the court order may be renewed — to no avail in silencing the individual or network behind this pseudonymous Twitter account.

Not all Fuat Avni tweets turned out to be true, but for those that were matched by ensuing events earned enough credit for accuracy. “Journalists writing about corruption, MIT [Turkish National Intelligence], trucks, hostages will be purged. Erdogan had asked MIT to place these journalists under surveillance,” Fuat Avni tweeted Aug. 15, noting that Erdogan knows no limits in designing the media. “At the order of Erdogan, the list of to-be-purged journalists was sent to Dogan, Ciner, Demiroren and Al Jazeera media groups.” Fatih Yagmur of Radikal daily tweeted on the same day. His contract was suspended immediately. “I feel proud for the inconvenience I caused,” Yagmur tweeted. He reported in January that the trucks bound for Syria were carrying weaponry and belonged to MIT.

In the meantime, Turks continue to feverishly debate whether the information revealed and the impact applied by such pseudonymous accounts may be considered under the “freedom of speech” principle, or that all players should be up front with their authentic, original claims in social media. The public debate questions also how to discern the motivations behind these pseudonym users: whether as pawns of some outside powers, or as patriots still prioritizing self-security before anything else.

Some even wonder whether all the government's wrongdoings should see the light. Put simply, there is a lively debate going on in Turkey with all these ongoing, exquisite tweets forcing everyone to think harder about what it is they truly understand about a democratic culture and the embrace of freedoms, especially when the rule of law is the weakest link in the chain.