Financial media say the Turkish economy is in recession, and Turkey refuses to renew the press cards of three German journalists. 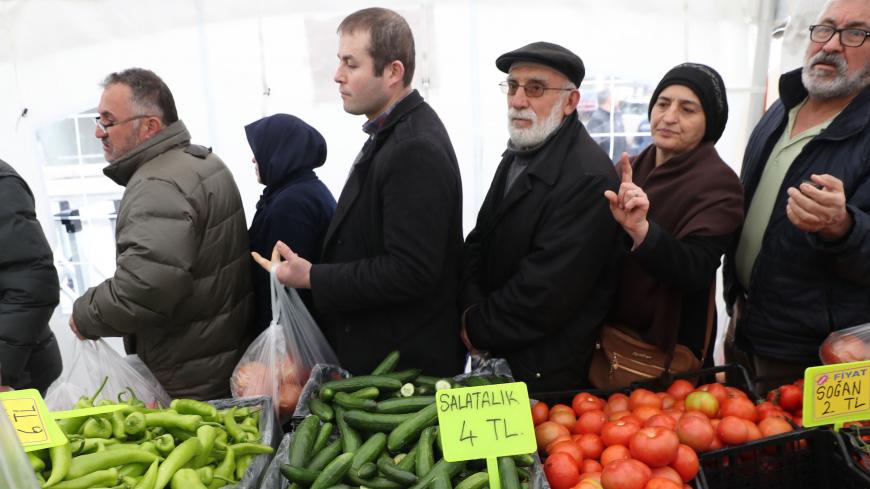 People line up to buy vegetables at a tent set up by the Ankara metropolitan municipality in the Cankaya district of the Turkish capital, Feb. 13, 2019. Confronted with persistently high inflation ahead of March 31 local elections, Turkish authorities have set up stands to sell vegetables at unbeatable prices. - ADEM ALTAN/AFP/Getty Images

ANKARA, Turkey — The Turkish economy sank into recession in the fourth quarter of 2018, according to figures released by the national statistics authority March 11. The news is highly inconvenient to President Recep Tayyip Erdogan, who is campaigning vigorously for March 31 municipal elections in which voters are expected to express their anger over the soaring cost of food.

TurkStat said the fourth-quarter contraction was 3% year-on-year, and 2.4% from the previous quarter. By the seasonally adjusted, quarterly measurement, the economy also contracted in the third quarter of 2018 (by 1.6%), meaning that Turkey has suffered the two consecutive quarters of negative growth that characterize a recession.

However, a senior economics official told Reuters that the government preferred the year-on-year measurement of contraction. As the economy grew by 1.8% year-on-year in the third quarter, it seems the government will wait to see what happens to GDP in the first quarter of this year before officially assessing whether Turkey is in recession.

However, financial media had no such hesitation. Bloomberg headlined a headlined a story on the topic: “Turkey Enters First Recession in a Decade as Elections Loom.” It quoted Julian Rimmer, a London trader with Investec Bank, as saying: “This is an indictment of Erdo-nomics and a direct consequence of a monetary policy in 2018 conducted in the interests of short-term political expediency rather than economic pragmatism.”

The Financial Times said the country had entered recession at the end of 2018 “as a collapse in the lira and a sharp hike in interest rates brought economic growth to a halt."

Finance Minister Berat Albayrak was upbeat about the figures. “The worst is behind us,” he tweeted.

Albayrak, who is Erdogan’s son-in-law, said the economy had survived “the most serious speculative attack in history."

“The current data for 2019 show the economy is making a rapid recovery. The decline in growth is temporary,” he added.

However, economist Cem Oyvat was not so sanguine. He told Al-Monitor the latest data indicate growth will be negative in the current quarter, year-on-year. If that transpires, Turkey will be in recession even by the government’s definition.

Oyvat said he was looking at two pointers: First, the purchasing managers’ index (PMI), which is a measure of business confidence based on surveys of manufacturers. Second, loans to the non-financial sector, which means what banks lend to everybody except other banks and financial institutions.

The London-based information provider Markit says the purchasing managers' index for Turkish business confidence was 44.2 in January and 46.4 in February.

A purchasing managers' index “below 50 is usually considered as a sign of an economic recession,” Oyvat said. He said that although February’s index “shows signs of a slight recovery, it still shows signs of an ongoing recession.”

“The drop suggests that businesspeople either do not have access to credit or are choosing not to invest,” Oyvat said.

Surveys of consumer credit reveal a similar pattern: “Consumers either cannot afford to buy or are choosing not to buy in conditions of recession,” said Oyvat, who lectures at the University of Greenwich in London.

In a separate development, two German journalists flew home Sunday after Turkey refused to renew their press cards. They accused Ankara of trying to muzzle the foreign press.

German Foreign Minister Heiko Mass told the media that Turkey’s action against Thomas Seibert of Tagespiegel newspaper and Joerg Brase of ZDF television was “not compatible with our understanding of press freedom.”

The day before their departure, Germany strengthened its travel advisory for Turkey. The new advisory used language that is rare for notices that usually warn citizens about the dangers of terrorist attacks and conflict.

The advisory said statements that would be "covered by the German legal understanding of the freedom of expression can lead in Turkey to occupational restrictions and criminal proceedings.”

A third German journalist, Halil Gulbeyaz, who reports for NDR broadcasting and spends more time in Germany than in Turkey, was also told his press card would not be renewed.

All three reporters received an email from the communications department of the Turkish presidency March 1 saying their applications for 2019 press cards had been rejected. The letters gave no reason.

At a press conference in Istanbul before heading to the airport, Seibert and Brase said they were at a loss to explain why they had been singled out.

Their effective expulsion — as the denial of press accreditation meant they had no chance of extending their residence permits — comes at a time when it was thought that Turkey was trying to improve relations with Germany. In September, Erdogan paid a state visit to Germany and opened a beautifully designed mosque in Cologne.

“The Turkish government has managed to more or less silence the national media,” Brase told the press conference. “They’re now trying to do it with the international media, and we should not submit to that.”

Brase, who came to Turkey in January 2018 as bureau chief for ZDF, said Turkey’s move would “cause more damage for Turkey than it does for us.”

When Al-Monitor asked Brase what he meant, he replied it would harm Turkey’s image and referred to the strengthening of the travel advisory.

Seibert said he would go on reporting about Turkey from outside the country. “I’ve been here for 22 years,” he told the press conference, “of course I’m not going to stop now.”

Two Turkish legislators criticized the withdrawal of the Germans’ press cards, including a member of Erdogan’s Justice and Development Party (AKP).

“This decision tarnishes Turkey's credibility,” said Mustafa Yeneroglu of the AKP. “I neither comprehend nor approve of the decision.”

The presidency’s press office received a written request for a response to Brase’s comment about silencing the media, but it did not reply.