Palestine, irked by Israel's declaration to adopt the Palestine viper as its national snake, takes the issue to the United Nations, accusing the Jewish state of "seizing symbols of Palestinian biodiversity." 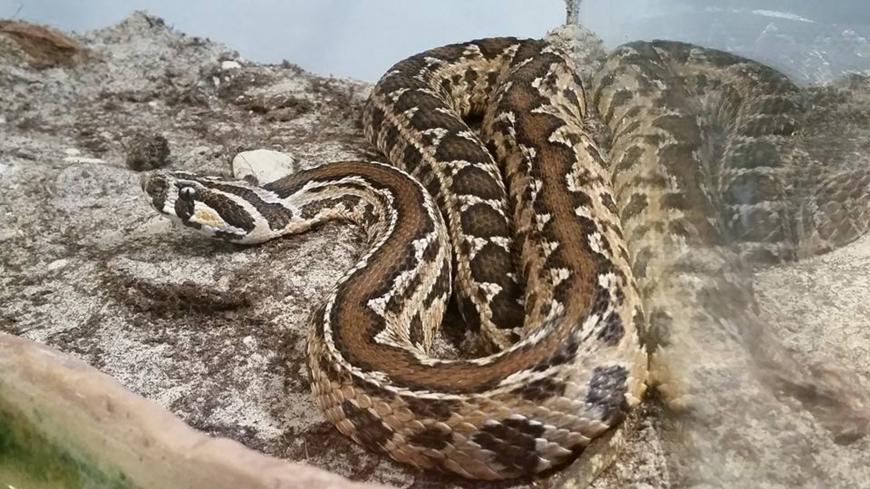 The Daboia palaestinae, or Palestine viper, was renamed as the Land of Israel Viper. Posted Sept. 8, 2014. - Facebook/huitsing.reptiles

GAZA CITY, Gaza Strip — The Palestinian Authority is preparing to file a formal complaint against Israel at the 14th United Nations Biodiversity Conference, to be held in Sharm el-Sheikh on Nov. 17-29, on the grounds that the Jewish state has “seized the symbol of Palestinian diversity.”

This Palestinian action comes in response to the Israel Nature and Parks Authority (INPA) declaring the Palestine viper as Israel's official national snake. The deadly viper was renamed as "Land of Israel Viper," according to the Jewish Telegraphic Agency.

The snake was selected following an online vote, between Sept. 1 and Oct. 31, initiated by Avi Zobel, a snake catcher and activist for the preservation of reptile species in Israel. Zobel’s campaign was launched in partnership with the Society for the Protection of Nature in Israel and under the auspices of the INPA. The viper won with 39% of the total of 9,419 votes, thus getting the status as a national symbol of Israeli biodiversity.

Adalah al-Atira, head of Palestine’s Environmental Quality Authority (EQA), told Al-Monitor that at the conference the Palestinians will argue that the Israeli action contravenes the principle of the Convention on Biological Diversity, created in 1992 under UN auspices.

The convention, ratified by 168 countries, including Israel, reaffirms that states have sovereign rights over their own biological resources.

Imad al-Atrash, executive director of the Palestine Wildlife Society, told Al-Monitor, “The Palestine viper was discovered in Palestine in 1938 during the British Mandate. This is 10 years before the State of Israel was established. Austrian herpetologist Franz Werner gave it the universally recognized scientific Latin name Daboia palaestinae.”

He pointed out that the viper lives in Israel, the West Bank, parts of Jordan, Lebanon and Syria, and that there are 30 types of snakes in the Palestinian territories, including four poisonous species, the most dangerous of which is the Palestine viper, which has three fangs.

According to Mahmiyat, an independent Palestinian website focusing on natural and cultural resources in the Palestinian territories, the Palestine viper is “1.4 meters [4.6 feet] long and has a triangle on its head with dark shapes on its back. Its color may vary from light brown to dark brown. It lays 30 eggs during the months of July and August.”

Atrash said, “Several countries often share certain species of animals or birds such as the German Shepherd dog that is widespread in most countries around the world, although it was first discovered in Germany. It nevertheless maintained the same name.”

He added, “But for Israel to change the name of the Palestine viper — which was discovered in Palestine decades ago — to the Land of Israel Viper is very disrespectful and represents a clear theft of Palestinian environmental symbols.”

Atira also said that Israel was attempting to remove the Palestinian identity and to give Palestinian heritage and history “an Israeli identity.”

“This is not the first time that Israel steals a Palestinian national symbol that expresses Palestinian biodiversity and heritage. Israel has in the past claimed the olive tree as its national tree and falafel as a national dish,” she added.

Atira noted that the EQA intends to organize awareness campaigns in all Palestinian schools and cultural and environmental centers to promote the Palestine viper and confront the “Israeli fraud.” She also called on all international scientific and environmental forums not to adopt the Israeli name attributed to this snake.

Hani al-Wahidi, director of the Health Information Center at the Palestinian Ministry of Health, told Al-Monitor, “The Palestine viper is present in various Palestinian coastal, mountainous and desert areas and valleys, and annually about 100 Palestinians are bitten by these vipers.”

He said that treating this bite is very expensive, as it requires 15-20 doses of the antiserum, the cost of which is 5,000 Israeli shekels (roughly $1,350) per dose.

He explained that the ministry buys the antiserum from Israel, which developed it a few years ago, noting that it is buying 700-1,000 doses per year at an estimated cost of at least 3.5 million shekels ($950,000).