How will Palestine benefit from joining international environment group?

Palestine is seeking more global recognition as it recently became a member of the International Union for Conservation of Nature. 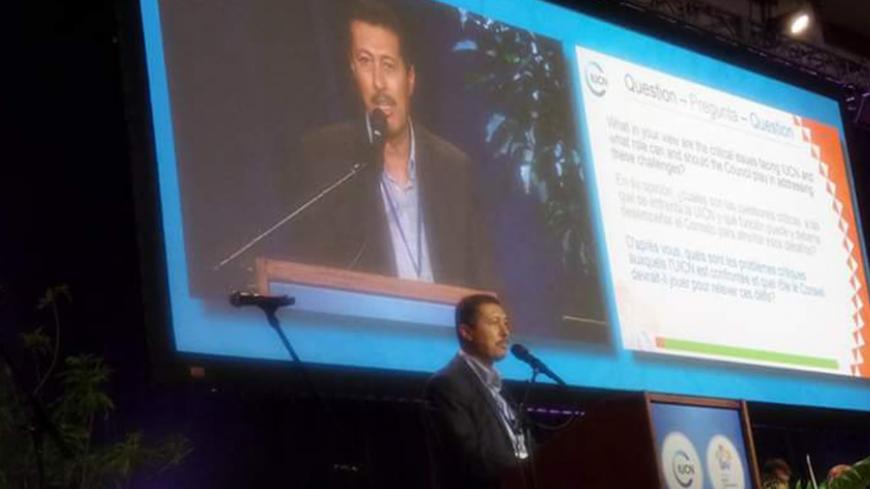 Ayman al-Rabi onstage at the IUCN World Conservation Congress, where he was voted in as a regional councillor for the organization, Honolulu, Hawaii, Sept. 10, 2016. - Facebook/@Pengon-foe Palestine

GAZA CITY, Gaza Strip — With Palestine becoming a member of the International Union for Conservation of Nature (IUCN), one of the largest environmental groups, Palestinians have realized a long-sought-after achievement in light of Israeli practices that threaten their environment and prevent them from benefitting from their natural resources.

Palestine joined the IUCN — which includes 1,066 nongovernmental and 217 governmental organizations and has observer and consultative status at the United Nations — during the group’s World Conservation Congress held in Hawaii, Aug. 30-Sept. 10. Some 1,000 participants representing governments and organizations and around 10,000 others attended the congress, which focused on IUCN strategic policies for 2017 through 2020.

Imad Atrash, director of the Palestine Wildlife Society in the West Bank, told Al-Monitor that Palestine could not have become a member of the IUCN without UN acknowledgment of it as a nonmember state and acceptance in the United Nations Educational, Scientific and Cultural Organization.

Atrash believes IUCN membership will produce significant benefits for Palestine. Among them, Palestinian experts will be allowed to take part in global associations for nature preservation. Also, Palestine will be able to better expose and possibly legally challenge Israel for practices that result in environmental destruction, in particular through the building of settlements, turning nature reserves into closed military zones and destroying reserves to build the separation wall.

The Palestinian Central Bureau of Statistics (PCBS) issued a report in December 2014 indicating that there are 47 nature reserves in the West Bank and one in Gaza. Some sites were designated reserves under the British Mandate and others during Jordanian administration of the West Bank. The most recent reserve in the West Bank, Wadi Qelt, east of Jerusalem, consists of forests, water sources and some archaeological and ancient sites and was designated under Israeli occupation. The Palestinian Environmental Authority designated one site in Gaza, Wadi Gaza, a wetlands area, as a natural reserve. The total area of reserves in the West Bank and Gaza covers 198 square miles, with forests accounting for 39 square miles, according to the PCBS.

Ayman al-Rabi, executive director of the Palestinian Hydrology Group and IUCN regional councillor for West Africa, told Al-Monitor, “Our goal behind joining the IUCN is to show the world the challenges and risks facing nature in Palestine and urge [world powers] to help us protect it, especially since we are under Israeli occupation.”

“During the congress held every four years, the IUCN sets policies and strategic plans for the next four years, which Palestinians will take advantage of from 2017 to 2020. Most important, we will benefit from projects on biodiversity, climate change, water conservation and nature conservation ‘under occupation’ — a term that the West Asian member states have requested be added to the plans for the coming years, which received broad acclaim among all IUCN members.”

Among the IUCN priorities Palestine is hoping will benefit it are assessments of the environmental impacts of conflicts in West Asia, dissemination of information on conflict's effects on biodiversity, ecosystems and livelihoods, capacity building for conservation and civil society organizations, development of conservation and protection programs, including restoration of biodiversity, as well as programs for sustainable livelihoods in the region.

Roubina Ghattas, director of the biodiversity and food security department at ARIJ, told Al-Monitor, “Five out of the seven Palestinian associations participated in the World Conservation Congress at which Palestine become an IUCN member for the West Asian region.” She added that ARIJ, in cooperation with the Arab Group for the Protection of Nature in Jordan, had worked on designating West Asia a region affected by political conflict and occupation — and therefore with greater conservation needs — in the IUCN's program for 2017-20.

Ghattas explained that the main objective of the IUCN congresses is to exchange experiences, promote networking among members and share the means and tools that the IUCN uses to analyze the state of biodiversity in the world and develop four-year plans to be implemented around the world.

Merhi Shawahneh, director of the Palestinian Livestock Development Center, told Al-Monitor that citizens residing in marginalized areas in the West Bank, particularly in Area C, designated by the Oslo Accord, will be the biggest beneficiaries of Palestine’s IUCN membership. Their cause, grounded in Israel preventing their access to lands, will be presented to the world.

In 2015, the Israeli army uprooted 1,500 trees that were part of a nature reserve in Tubas province, in the northern West Bank. That same year, Israel seized Palestinian agricultural lands in Salfit, in the central West Bank, and prevented farmers from working there under the pretext that they were nature reserves. In late 2013, the Israelis had confiscated large areas of Wadi Qana, which they had designated a nature reserve, to facilitate the expansion of the Yakir settlement. They confiscated Palestinian lands in 2010 in the Aghwar area and made it a closed military zone.

Shawahneh said that 99% of Palestinian land in Area C that has been classified as natural reserves has either been turned into closed military zones or otherwise confiscated by Israel, which prevents their proper stewardship. This is particularly true for the Jordan Valley and the northern West Bank. In addition, because farmers and ranchers can no longer use these reserves and pastures, Palestinians have been forced to import feed from Israel for livestock.