Prime Minister Benjamin Netanyahu enjoys his role of defense minister, though he must worry that if any security crisis emerges, he will be perceived as solely responsible. 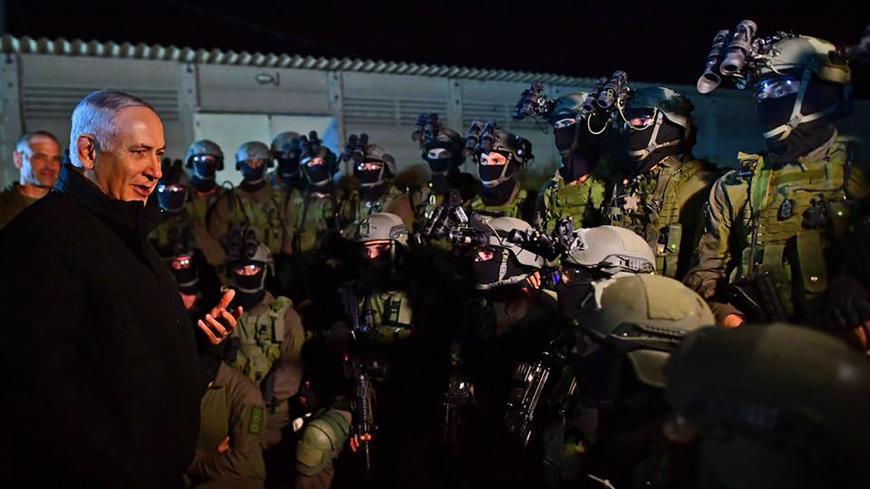 Throughout his four terms as prime minister, Benjamin Netanyahu has always been careful to appoint someone considered an authority on defense matters as his defense minister. In his first term in 1996, it was Maj. Gen. Yitzhak Mordechai, fresh out of the army and a new Likud member. Netanyahu fired him on the eve of the 1999 elections and appointed his old friend and defense minister in two previous governments, Moshe Arens.

When Netanyahu returned to power a decade later, he named Ehud Barak as his defense chief. Barak had been Netanyahu’s commander in the elite Sayeret Matkal commando unit and had served as prime minister, defense minister and military chief of staff, instilling in Netanyahu a sense of confidence as he set about planning to attack Iran’s nuclear facilities. Anyone looking at this duo during those years came away with the impression that Netanyahu truly needed Barak and relied on him to manage all aspects of the country’s security.

Netanyahu did not deviate from this pattern in his third term, naming former Chief of Staff Lt. Gen. Moshe Ya’alon as defense minister in 2013. The two worked well together and Netanyahu once again entrusted him with the defense minister’s job after the 2015 elections as he entered his fourth term.

That was the old Netanyahu, who must have sensed that he needed an experienced defense minister at his side and feared bearing sole responsibility for managing Israel’s complex defense issues. After all, he knows better than anyone else how messy security-related issues can get and how ruinous they can be for political careers. In addition, handing the defense job to someone else put some space between himself and the demands of the West Bank settlers, given that the defense minister is in charge of matters in the territory. Barak, as a member of the leftist political camp, did not have a problem with this status, but Ya’alon paid a heavy political price on the right.

Netanyahu made sure to name worthy defense ministers and enjoyed the political protection they provided him. When Israel sought to achieve a speedy cease-fire with Hamas in Gaza during the 2012 Pillar of Defense operation, Barak was front and center. The same was true during the 2014 Protective Edge operation in Gaza — most of the criticism over its somewhat hesitant conduct was directed at Ya’alon. In the case of the March 2016 shooting death of a wounded Palestinian attacker by Elor Azaria in the West Bank city of Hebron, Ya’alon was thrown under the bus over the decision to indict the soldier while Netanyahu managed to shield himself in large part from the fury of the right.

In May of 2016, Netanyahu took a new tack when he deposed Ya’alon and named Yisrael Beitenu head Avigdor Liberman to succeed him. For the first time he had a defense minister with no real defense experience, having served in the army as a quartermaster. It was a necessary political move to stabilize Netanyahu’s narrow coalition, but unusual given his previous experienced appointees.

When Liberman resigned on Nov. 15, Netanyahu decided to keep the job for himself and took on the attendant risk. Now, for the first time, he is serving as minister of defense and the entire responsibility for the state’s security rests on his shoulders, as was the case with Prime Ministers David Ben-Gurion, Levi Eshkol, Yitzhak Rabin and Barak, who also held both jobs.

In the two weeks since he took office, Netanyahu appears to have fallen in love with the job’s potential for his image. The social networks are full of photos and videos of Netanyahu visiting army bases surrounded by soldiers and officers. His social media team is working overtime to produce such videos with dramatic background music designed to convey a sense of military might.

This week alone, within less than 24 hours, Netanyahu visited new recruits at the army’s main induction center and also met with commando fighters. The videos of these events show his clear enjoyment of every minute. He sat with the new recruits for a long time, recounting his experiences as a freshman soldier, telling them about his service in the commando unit and about his brother Yoni, who was killed in the 1976 Entebbe hostage rescue operation. He then had lunch with them and made a surprise call to the mother of one of the young soldiers. Everything was documented and posted. He joined Chief of Staff Gadi Eizenkot for a night visit to a commando unit exercise. The backdrop was perfection: Netanyahu facing soldiers and officer in the darkness, telling them, “We are on the eve of Hanukkah, the spirit of the Maccabees is here and you are the Maccabees. We overcome our enemies. ... The people of Israel believe in you. Defend the state, protect yourselves.” Sharp-eyed observers noticed that Eizenkot was nowhere to be seen. Netanyahu is not sufficiently generous to share the glory.

These videos and photos are worth their weight in ballots, and Netanyahu, who is already in the midst of an undeclared election campaign, is exploiting their electoral potential to the hilt.

His coalition woes, the Gaza problem, the investigations he faces and the impending decisions by Attorney General Avichai Mandelblit on whether to indict the prime minister have all fallen by the wayside. At this point, there is nothing like official visits abroad (Netanyahu announced he would soon travel to Chad) and drop-ins on army units to leave those troubles behind and focus on an unrelated agenda. An associate of Netanyahu told Al-Monitor on condition of anonymity that this is just the beginning, and that Netanyahu has asked for additional army visits to be scheduled. “It really makes him happy,” he said.

But this role has a potentially explosive downside. When Netanyahu wears the hats of both prime minister and defense minister, he has no one with whom to share the less glamorous aspects of the job. This awareness, which had so far made him distance himself from the job, might have been dulled in recent days as he made his telegenic appearances at army bases, but it is nonetheless still relevant. Quite a few defense ministers have paid a heavy political price for their terms (for example, Labor’s Amir Peretz following the 2006 Second Lebanon War).

As he stated on Nov. 18 in his first remarks after assuming office, Israel is in a sensitive security situation, the nature of which he cannot share with the public. But Netanyahu could find himself embroiled in a defense-related crisis any day on the Gazan or northern fronts that would leave him exposed to the cruelty of public opinion and heavily damage his Mr. Security image. That, surely, is his greatest fear.