Despite the ongoing threats from Islamic State militants along the Iraq-Syria border, the two countries are preparing to reopen important crossings. 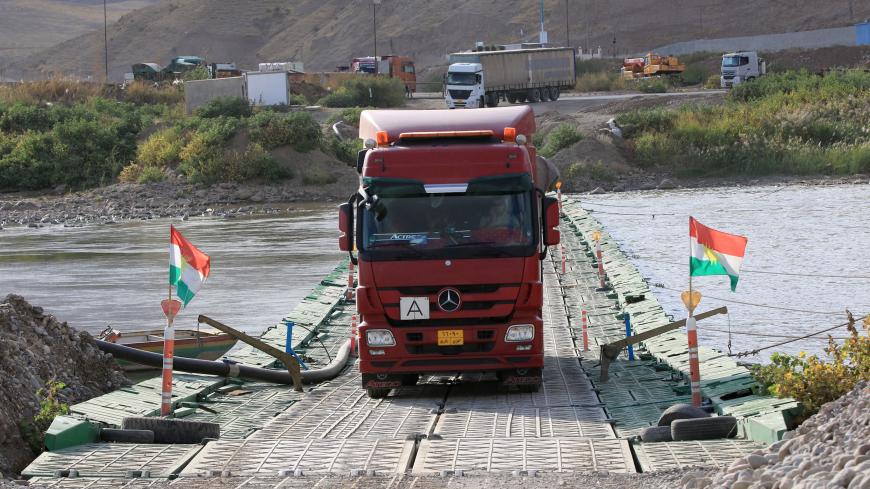 A truck loaded with goods coming from Syria is seen at the Iraqi-Syrian border crossing in Fish Khabur, Iraq, Oct. 31, 2017. - REUTERS/Ari Jalal

In an interview with Russia's Sputnik Nov. 1, Syrian Transportation Minister Ali Hammoud said Syria is preparing to open checkpoints on its border with Iraq now that security has returned and is looking forward to working with Iraq on logistics.

The Iraqi government received a request from Syria at the end of October to send a special delegation headed by Foreign Minister Walid al-Muallem to discuss reopening the border crossings. Baghdad reportedly welcomed the idea.

Former Iraqi Foreign Minister Ibrahim al-Jaafari and his Syrian counterpart decided to open the border crossings, especially the strategic Al-Bukamal border crossing, in a Oct. 15 meeting. Jaafari said the crossings between Iraq and Syria had been closed because of “exceptional circumstances” after the Islamic State seized Al-Bukamal city in the Deir ez-Zor countryside. The Syrian army recaptured El-Bukamal Nov. 11, 2017, the most important crossing in the region, linking key Iraqi cities like Haditha and Hit to Syrian cities like Palmyra, Al-Mayadeen and Deir ez-Zor.

Spokesperson for the Iraqi Ministry of Interior and Baghdad Operations Saad Maan told Al-Monitor that despite the presence of IS fighters on the border, “The Iraqi-Syrian borders have indeed been liberated completely.”

The Popular Mobilization Units (PMU) announced Oct. 30 that the force had raided a group of IS militants on the border and killed two of their leaders.

Maan added, “Al-Bukamal crossing was an important stronghold for IS in Syria, and its closing cut off communication between Iraq, Syria and even Lebanon. This also stirred security chaos and resulted in huge economic losses.”

He said, “Iraq is now ready to open the borders, as it is able to secure the road leading to Iraqi provinces, whether for touristic, trade or economic purposes toward the Syrian borders.”

Hisham al-Hashemi, an analyst of jihadi groups for Al-Nahrain Center for Strategic Studies, is less optimistic. He told Al-Monitor, “Opening Al-Bukamal and other crossings won’t be as easy as it was portrayed in the agreement between the two parties.” He explained, “The crossing is still destroyed and remains within the circle of danger. It still under terrorist threat. The international highway between Iraq and Syria needs maintenance, and dozens of bridges were destroyed during the liberation battles.”

Hashemi added, “The lack of specific funding in the 2018-2019 budget makes the practical steps to safely invest in border crossings harder.”

Hashemi concluded, “The decision to open the crossings is an improvised political card that Jaafari had to play toward the end of his term.”

Iraqi Ambassador to Syria Saad Mohammad Rida disagreed with Hashemi, saying, “The strategic cooperation agreement between them that will be signed soon will promote and develop all sides of security, trade, economic and political bilateral relations. Therefore, opening the borders is pivotal.”

Mahmoud al-Hashemi, political analyst and secretary of the National Media Council, told Al-Monitor that the two countries are eager to reopen the border crossings because of the enormous potential political and economic gains. Syria is a land route to the Mediterranean, and its location overlooking the sea can be capitalized on to export Iraqi oil and import merchandise from different sources. Iraq is also a strategic crossing for Syria to the Gulf and the countries overlooking it.

Parliament member and spokesperson for Asaib Ahl al-Haq Naim al-Abboudi told Al-Monitor, “Opening the crossings heralds a new page of security in the adjacent regions in Iraq and Syria where terrorism was rife for a long time. Communication between Iraq and Syria through the border crossings will suffocate terrorist groups, promote peace and replenish the economy in both countries.”

Abboudi confirmed, “The PMU factions will defend these crossings if the Iraqi government asks them to. They will be ready to carry out any mission ordered by the chief of staff.”

Reopening the crossing will require coordination between the new Iraqi parliament and appointed prime minister on a budget for security and legislation on customs procedures. Maan told Al-Monitor that the border is ready to open and for investment from both sides and the private sector to develop the area.