Is Iraq poised for large-scale military involvement in Syria?

As the battle against IS approaches its end in Iraq, Syria and Iraq have stepped up their security and military cooperation with the aim of preserving Iraqi territories against the activities of terrorist groups operating from the Iraq-Syria border area. 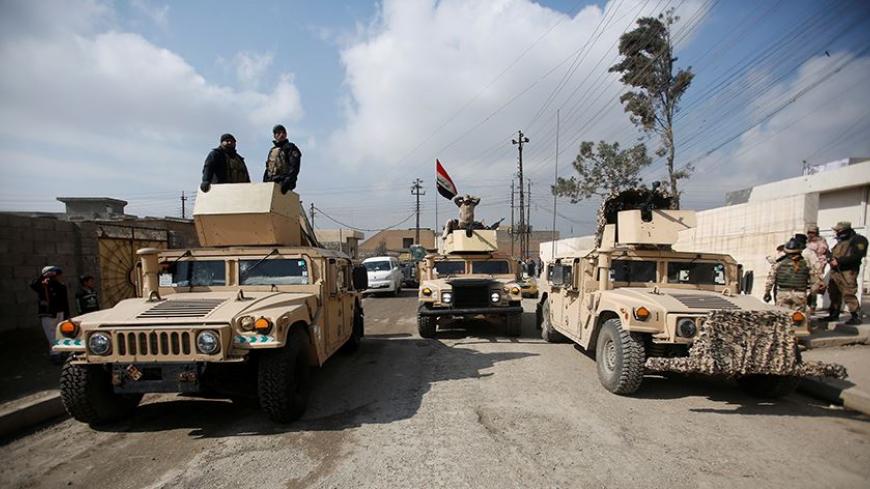 BAGHDAD — With the Islamic State (IS) nearly defeated in Iraq, Baghdad and Damascus have remarkably stepped up security and military cooperation. On March 29, the Iraqi Federal Intelligence and Investigation Agency announced that, through coordination between the two countries, the Syrian Air Force has successfully carried out airstrikes against the Syrian cities of al-Bukamal and Deir ez-Zor near the Iraqi borders. The two areas host senior leaders from IS and other terrorist groups. The airstrikes destroyed 39 IS sites used as labs for manufacturing arms and explosive belts, killing dozens of terrorists and destroying large quantities of weapons, auto parts and infrastructures. The agency’s statement added that the targeted terrorist groups were planning to “launch large-scale attacks and take control of Syrian government buildings.”

On March 13, Syrian Foreign Affairs Minister Walid Moallem extended a formal invitation to his Iraqi counterpart Ibrahim al-Jaafari to visit Damascus to expand security and military relations and agreements between the two countries.

Speaking at the March 8 Sulaimaniyah Forum hosted by the American University of Iraq at Sulaimaniyah, Iraqi Prime Minister Haider al-Abadi said, “With due respect to the sovereignty of other countries, I will not hesitate to strike terrorist sites in neighboring countries if they threaten the security of Iraq.”

Abadi’s statement came after Iraqi fighter jets flew into al-Bukamal within the Syrian territories on a mission to bomb IS sites there on Feb. 24. Abadi justified the move, saying he “obtained approval from the Syrian government.”

The US Department of Defense praised the airstrikes carried out by the Iraqi air force within the Syrian territories. Pentagon spokesman Capt. Jeff Davis, in a Feb. 24 press briefing, said, “The Pentagon was informed of the Iraqi airstrikes in Syria and provided intelligence to Iraq. The airstrikes were good and effective against [IS] targets.”

Nicholas Heras, a Middle East research associate at the Center for a New American Security, a security think tank in Washington, argued that the most significant aspect of the Iraq-Syria security and military cooperation is the fact that “it demonstrates that IS’ center of gravity has shifted from Mosul to the Iraqi-Syrian border area.”

In a March 2 statement to the Iraqi Al-Mada newspaper, Iraqi member of parliament Abdul-Aziz Hassan said that IS has relocated its training and planning centers to the Iraqi-Syrian border area where the Iraqi government has pursued groups that have been fighting in Iraq before moving to Syria.

The Iraqi government estimates that the targets bombed on the Syrian border were the departure point for rigged cars striking Iraqi cities.

The ongoing security and military cooperation, together with Abadi’s statement concerning military strikes outside Iraq, indicate that the Iraqi government intends to take part in the fighting in Syria on a larger scale.

Speaking to Al-Aalem Al-Jadeed newspaper on condition of anonymity, security sources revealed that the United States requested that Abadi dispatch the 2nd Division of the Iraqi Special Operations Forces of the Counter Terrorism Services to take part in recapturing the Syrian city of Raqqa from IS.

In an interview with Al-Monitor, Maj. Gen. Imad Eloan, an adviser at the European Center for Counterterrorism and Intelligence Studies, said, “Taking into account the statements made by Abadi and the leaders of the Popular Mobilization Forces concerning the fight against terror in Syria, in addition to the preparations on the ground for the battle of Raqqa from the dispatching of an additional 400 US troops in Syria to the dispatching, for the first time, of the famous US reconnaissance planes used by the CIA, we might be looking at a potential involvement and decisive role by Iraqi forces in the battle of Raqqa, owing to their recent experience in the fight against IS.”

This role is of major importance to the political developments in the region. By maintaining good relations with the United States and Syria alike, Iraq would assume a mediator role, which would contribute to restoring stability in Syria. But this role, especially after the US airstrike on a Syrian airfield on the morning of April 7 local time, would be a very complicated and hard task, and Iraq may hesitate about taking such a risky step.

The head of the Iraqi Center for Political Thought Ihsan al-Shammari told Al-Monitor, “Iraqi airstrikes against terrorist strongholds in al-Bukamal represent a new turning point in the fight against terror. However, it should not be construed as the beginning of an Iraqi large-scale air and ground operation against terrorist groups in non-Iraqi areas. Iraq is involved in a security war that will continue even after the recapture of Iraqi cities from IS, since its remaining cells will keep trying to destabilize the country. This is why it seems that Iraq will limit its cooperation with neighboring countries and Syria in particular to information and intelligence exchange.”

This new role, on any level, shows that Iraq is trying to re-establish its stature in its Arab and regional entourage and that, in the Iraqi government’s view, combating terrorism at the intelligence and military levels will speed up this comeback through diplomatic and economic channels.

When it comes to fighting terrorism, Iraq seems to possess more experience than its neighbors. This is why Iraq will be able to help other countries in the fight against terror, which for now seems to be the effective way. In turn, Iraq is portrayed as a provider of help rather than a country that needs it. However, the question remains: Will Iraqi politicians be able to build on this move or will political conflicts play a negative role, maintaining Iraq’s agitated role in regional developments?