Due to its strategic position and impact on the future of Syria, the Iraqi-Syrian border is likely to be the site of a new conflict between the allies of Washington and Tehran soon after the Mosul operation concludes. 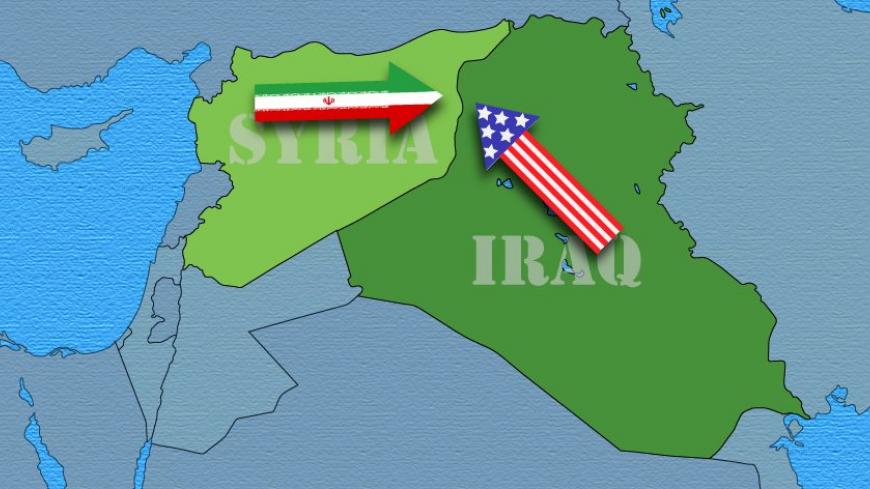 BAGHDAD — As the Popular Mobilization Units (PMU) continue their operations in the western areas of Mosul, some PMU factions reached the Syrian border May 29 and were met by Syrian army divisions on the other side of the border.

According to the May 29 statements of Hadi al-Ameri, secretary-general of the PMU-affiliated Badr Organization, PMU forces are stationed in the Um Jaris village on the Iraqi-Syrian border, northwest of the Ninevah governorate. The forces announced that they intend to continue to control the Iraqi-Syrian border toward al-Qaim district, north of the Anbar governorate, stretching over 300 kilometers (186 miles).

International coalition aircraft had previously bombed a convoy of the Syrian army and armed loyalists near the border triangle between Iraq, Syria and Jordan, according to Abu Alaa al-Walai, secretary-general of the Martyrs of Sayyid Battalions, affiliated with the PMU. “The US aircraft bombed Friday night, May 19, PMU forces in the area of Abu Kamal, near the Iraqi-Syrian border,” Walai said.

As the Syrian government headed by Bashar al-Assad prepares to exert influence over the Iraqi-Syrian border with the help of its allies in Iraq and Iran, the opposition armed groups seek to do the same with the support of the international coalition. The border area between Iraq and Syria will turn into a conflict zone between the allies of Tehran and those of Washington.

Ahmad al-Asadi, a PMU spokesman, told Al-Monitor, “The PMU forces will mobilize to secure the Iraqi-Syrian border and then shut it down to prevent the infiltration of terrorist groups.”

Asadi expects a possible clash between the Iraqi regular forces supported by the PMU with what he called “terrorist groups, controlling an area of 100 kilometers [62 miles] inside the Syrian border.”

“If we do not attack these groups, they will simply attack us first. This is when the clash will occur as we will protect our border, as we believe that the presence of these groups inside the Syrian border will pose a threat to Iraq,” Asadi added.

On April 7, Al-Monitor published an article regarding Iraq’s readiness to enter into the Syrian war. In the same vein, Wahhab al-Tai, adviser to the Iraqi interior minister, told Radio Sawa on May 15, “Iraq will not only defend its borders from within but will reach some areas beyond its borders to prevent the infiltration of terrorist gangs, especially from Syria.”

“There is security cooperation between Iraq and Syria in this regard, within the framework of the security quartet, which also includes Russia and Iran,” Tai added.

Iraq laid out a military plan to secure its border with Syria. Iraqi Prime Minister Haider al-Abadi said during a press conference May 9, “Iraq’s plan in the next phase is securing the Iraqi-Syrian border from terrorist groups.”

Iraqi national security adviser Faleh al-Fayyad, Abadi’s envoy to Syria and head of the PMU, confirmed to Almayadeen TV Feb. 8 that “the PMU is securing the Syrian-Iraqi border.”

Fayyad also relayed a verbal message from Abadi to Assad on May 18 about joint cooperation to fight terrorism in both countries and to secure the border between the two countries.

The PMU — which is fighting alongside the Iraqi government forces — seeks to reach and take control of the border between Iraq and Syria. This comes against the wishes of the United States.

The movement of the Syrian government forces toward the southern border indicates that they intend to get close to the al-Tanf base located in the area between Syria, Jordan and Iraq, where the United States trains Free Syrian Army (FSA) elements.

Retired Lebanese army Brig. Gen. Elias Hanna said in an interview with Al-Ghad Al-Arabi television May 12, “The US wants to control the Iraqi-Syrian border.”

A member of the FSA media office told Almodan newspaper on May 19 that “the Syrian government and Iran seek to control the crossings of al-Tanf and al-Walid to open a channel between Iran and Syria through Iraq. This would spell great clashes on the Iraq-Syria border.”

The borders between Iraq and Syria will not be turned into a safe zone anytime soon. This will be subject to major negotiations between the two concerned countries, as well as between the United States and Iran.

The United States seeks to ward off all threats against its military base in al-Tanf and keep away all forces from the borders, except for the forces it backs.

A military conflict over the Iraqi-Syrian border between the allies of Tehran and those of Washington is on hold now because of the ongoing military operations in Mosul.

However, it seems this conflict is inevitable and likely to erupt after the liberation of the district of Tal Afar in the Ninevah governorate.