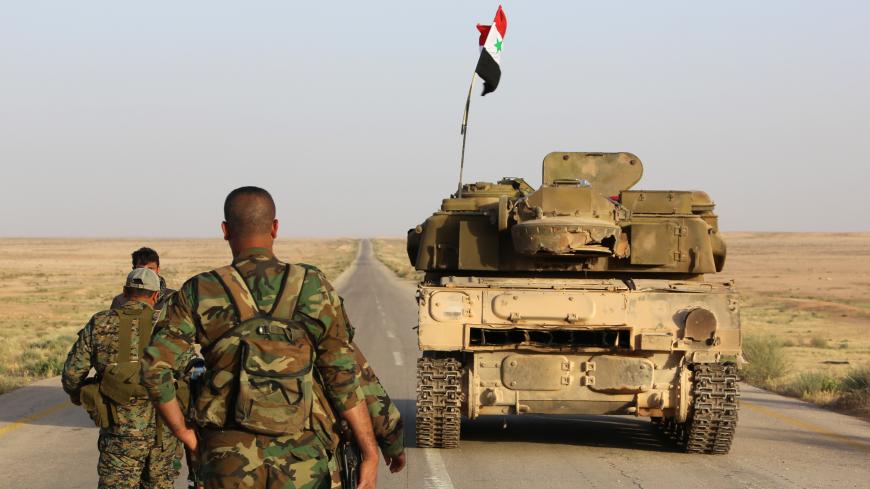 Syrian government forces secure a road for a military convoy in the desert area of Saba Biyar, in southeastern Syria near the border with Iraq, May 10, 2017. - AFP/Getty Images

Iraq is working to secure its western border with Syria from the militants that have been infiltrating the country to conduct terror attacks on Iraqi territory for the past 15 years. The Iraqi military has started cooperating with its Syrian counterpart to rid both countries of the last remaining Islamic State (IS) cells and secure the border between them.

Syrian Interior Minister Mohammad al-Shaar met with his Iraqi counterpart Qasim al-Araji in February to discuss cooperation on border security, an issue successive Iraqi governments have grappled with since 2003.

On May 21, Iraqi Prime Minister Haider al-Abadi issued directives to secure the border and prevent the infiltration of terrorists. In a May 22 address, Abadi stressed the need to secure the Iraqi-Syrian border, saying, “The clearance operations are ongoing, and we have successfully secured the Syrian side of the border, where IS militants have been crushed, especially in Upper Mesopotamia. There is cooperation to secure the rest of the areas near our border.”

According to Ahmed Jidiyan, the administrator of Qaim district near the Syrian border, ongoing cooperation between the Iraqi and Syrian armies has “prevented the infiltration of terrorists into Iraqi territories.”

The Iraqi army is also cooperating with other parties active on the ground in Syria, such as the Syrian Democratic Forces, backed by the US-led international coalition. Working together, they liberated the area of al-Baghuz near Deir ez-Zor.

Since declaring the liberation of all Iraqi cities from IS, Iraq has turned its attention to border security and is working with Syria's military forces to identify the routes IS elements had used to move militants and supplies between Iraq and Syria. A source from the Iraqi Ministry of Defense told Al-Monitor on condition of anonymity, “Information received from both Syrian and Iraqi military intelligence contributed to the arrest of a number of terrorists who planned to enter Iraq in the past weeks.”

Supplies had streamed across the 605-kilometer (376-mile) border to Iraq’s Mosul from Syria’s Raqqa during the fighting between the Iraqi security forces and IS.

Iran is trying to secure a passage from its western border to Syria and Lebanon to supply its militias there with weapons and other needs, passing through the Tal Afar district in Iraq. The Popular Mobilization Units, which enjoys Iranian support, controls another part of the border. The PMU coordinates its operations with the border guards affiliated with the Iraqi Interior Ministry. The PMU has clashed with IS fighters inside Syrian territory on several occasions.

On May 17, the Iraqi Security Media Center reported that two terrorists were arrested as they tried to infiltrate Iraq from Syria’s Hasakah province. The center’s spokesman, Gen. Yahya Rassoul, told Al-Monitor, “Iraq’s top priority is to protect its borders with Syria by intensifying intelligence efforts.” He added, “Iraq is using aerial surveillance technology to secure its border with Syria, while operations are ongoing to search deep in the desert to stop the terrorists, whose numbers are decreasing by the day.”

Mohammed Abbas, a retired Syrian major general, told Al-Monitor that a joint Iraqi-Syrian operations room has been set up in Baghdad. Abbas believes that the Iraqi-Syrian cooperation will help eliminate terrorists from the border areas, which he described as a lawless zone where terrorist groups could be present.

Iraq, whose warplanes previously bombed IS positions inside Syria, will continue to target the organization on the border in cooperation with the Syrian government as long as IS is present.