As tensions between the United States and Iran are at their height in the Gulf region, there are talks about Iran pushing for the opening of al-Bukamal crossing between Syria and Iraq. 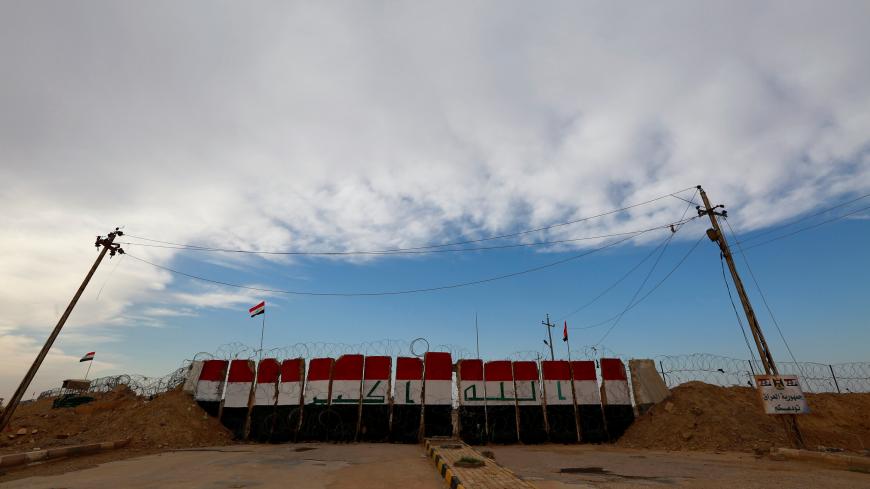 The Qaim gate is closed at the border between Iraq and Syria at Qaim, Iraq, Nov. 27, 2018. - REUTERS/Alaa al-Marjani

As the showdown between Washington and Tehran escalates elsewhere in the Gulf, Iran is giving high priority to an effort to secure, control and reopen the al-Bukamal border crossing at Qaim, the only Syrian-Iraqi border crossing under Iranian control, to solidify its influence in the Levant and mitigate the impact of US sanctions. It remains to be seen, however, whether Iran will pull off this move and how the Donald Trump administration might react.

On April 23, two buses carrying Iraqi pilgrims visiting the Shrine of Sayyida Zeinab near Damascus passed through the al-Bukamal crossing for the first time since 2012, signaling it might soon open for business and travel. The city of al-Bukamal, also often referred to as Abu Kamal, is located on the Euphrates River in Deir ez-Zor province in eastern Syria. The crossing into Qaim, in Iraq's Anbar province, might open within six months, Iraqi border officials say.

Al-Bukamal’s strategic location has long made the city a military attraction for foreign powers. In the 17th century, it was the seat of an Ottoman sanjak and in 1921 the seat of a large garrison when French troops occupied Deir ez-Zor. After the US invasion of Iraq in 2003, the city became a crossing point for the Iraqi insurgency, which led in October 2008 to a US raid on al-Bukamal from across the Iraqi border.

Today, it might potentially become the major gateway for Iran’s land bridge that links Tehran, Baghdad, Damascus and Beirut while securing Iran’s access to the Mediterranean Sea. In the short term, this land corridor is a crucial asset for an Iranian regime seeking to expand trade and lessen the impact of US sanctions on its economy. Opening the al-Bukamal crossing will allow Tehran to cut its aerial route expenses from Tehran to Damascus, complementing its use of the Beirut-Rafic Hariri International Airport and the existing non-official border crossings that Iran runs in eastern Syria.

The Syrian regime’s efforts since last year to reopen this border crossing by engaging Baghdad have failed so far; these included most notably a letter in June 2018 from Syrian Foreign Minister Walid Muallem to his then Iraqi counterpart, Ibrahim al-Jaafari, asking to reopen al-Bukamal crossing, and most recently an April 10 visit by Syrian Prime Minister Imad Khamis to Iraq.

However, al-Bukamal has been paramount for the Iranian game plan in Syria; hence, the role of Damascus is increasingly marginalized. There are three phases in the evolution of the Iranian control of al-Bukamal.

The first phase began in November 2017 when Islamic Revolutionary Guard Corps commander Qasem Soleimani reportedly oversaw the battle to take al-Bukamal from the Islamic State (IS); videos widely circulated on social media showed him visiting the area. Soon after the end of this battle, Moscow and Damascus moved their already overstretched forces to other fronts in the country but left behind militias affiliated with the Syrian regime.

Al-Bukamal was subsequently dominated by unruly militias who reportedly clashed for influence and control of “crossing fees,” most notably on the flow of goods between the two banks of the Euphrates River. Those confrontations reached their peak in August 2018 with clashes between Syrian regime militias and Iranian-backed militias. A “reconciliation committee” began its work in September to defuse these tensions.

The second phase, which began in October, was marked by Tehran gradually expanding its influence while managing tensions with Moscow. The Iranian regime was enforcing new demographics in the area and buying the loyalty of locals through services and cash payments. Meanwhile, Russia also deployed forces near the al-Bukamal crossing in October, three months after the Helsinki summit between President Donald Trump and his Russian counterpart Vladimir Putin. While these Russian and Syrian regime forces had a symbolic role of serving as a disengagement force between the Syrian Democratic Forces (SDF) and the Iranian-backed militias on the two banks of the Euphrates River, it has also protected the expansion of Iranian influence in this border area.

When the United States reimposed sanctions on Iran in November, Tehran began to accelerate the pace of reopening the al-Bukamal crossing, which became a needed lifeline for its ailing economy. Since January, the Iranian regime has increased the rate of trade deals with Iraq and Syria, which seems part of a larger plan to connect its economy and security to these two countries through highways, railways and energy grids. On March 17, the Iraqi army’s chief of staff, Othman al-Ghanemi, said during a joint press conference with his Iranian and Syrian colleagues in Damascus that the al-Bukamal crossing would open in “the next few days.” The next day, the Iranian army chief of staff, Mohammad Bagheri, traveled from Damascus to visit Iranian troops and their allies in al-Bukamal.

The third phase began this month when Tehran took full control of al-Bukamal and began to impose order in the area. The Iranian regime reportedly withdrew the Nujaba Movement, Kataeb Hezbollah and Fatimiyoun Brigade from al-Bukamal into Iraq. Iran also reportedly ordered the dissolution of the Syrian regime’s “military security shield forces” militia, led by Mohammed al-Zarzour, who was known to be looting goods and furniture from the area; this move reportedly renewed clashes between Iranian-backed militias and Syrian regime militias. But Tehran’s influence remains uncontested in al-Bukamal.

Earlier this month, Moscow withdrew its forces, including the Syrian regime’s 5th armored division, and reportedly left one branch as a symbolic presence in al-Bukamal. While Russian military sources declined to confirm or deny these reports, it has been confirmed by local sources in al-Bukamal. This sudden withdrawal means Moscow most probably fears for the safety of these troops in the current environment between Washington and Tehran, while also seeking to avoid any clashes between the Syrian regime and Iranian-backed militias. Moscow basically left Iran to itself in the battle to reopen the al-Bukamal border crossing.

There is indeed a lot at stake for Iran in al-Bukamal. The two other official Iraqi-Syrian border crossings in al-Tanf (held by Syrian rebels) and al-Yaarabiyah (held by the SDF) are under US influence. Moreover, the SDF is 10 kilometers (6 miles) from the Iranian-backed militias across the Euphrates River while Iraqi security forces and Hashd al-Shaabi are across the border in Qaim.

How the United States might react remains a mystery. Media speculation that the SDF might launch an offensive on al-Bukamal are not realistic, most notably since the SDF is preoccupied with the Turkish threat at this moment and is not keen to clash with Iranian-backed militias. However, Israeli jets can alternatively strike if the Trump administration passes intelligence about a convoy carrying an arms shipment across the Iraqi-Syrian border. There are also indications that the Trump administration is pressuring the Iraqi government not to open a border crossing that will facilitate trade with the Iranian and Syrian regimes, both on the US sanctions list.

As Washington and Tehran flex their muscles in the Middle East, the al-Bukamal test will be crucial for their rivalry. Betting on nascent US-Russian talks to resolve this issue might not be enough as Moscow might ultimately only offer to deter Iranian influence in southern Syria in return for US concessions.

While the Trump administration might not be able to prevent the actual opening of this border crossing, it can use its influence on the Iraqi government to render the Qaim crossing dormant, as it did with the Jordanian government’s Nassib border crossing with Syria. However, Amman does not have the entrenched, significant influence that Iran does in Baghdad. While publicly calling for the opening of the Qaim crossing with Syria, the Iraqi government will struggle to balance Iranian and US pressure to find a compromise on how to deal with a strategic border crossing. The Trump administration will have to soon decide whether it can live with a managed Iranian land bridge to the Mediterranean or decide at what cost it will be ready to abort it.