Iran's foreign minister is facing harsh criticism from hard-liners after his surprisingly frank remarks about money laundering in the country. 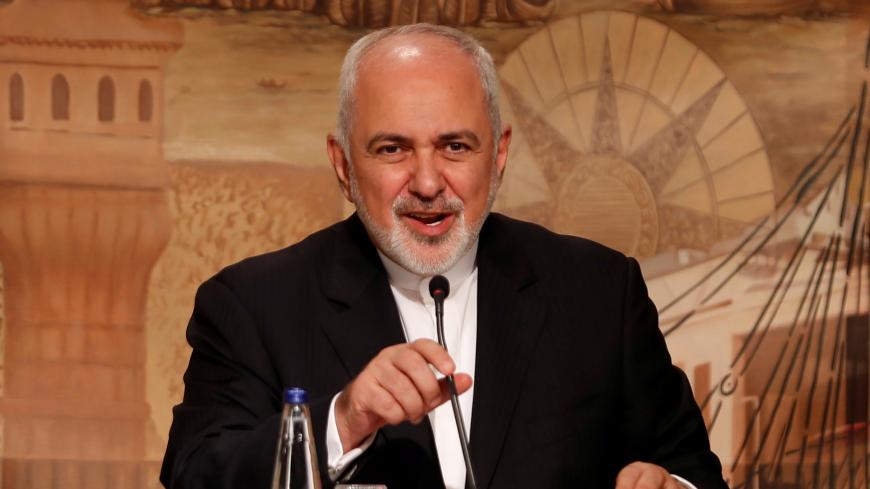 Iran’s foreign minister has entered another tough battlefront at home, riling up relentless criticism from the country's conservative camp after speaking up against "widespread money laundering" in the Islamic Republic.

"After all, money laundering is a reality in our country," Zarif said in a Nov. 10 interview with Khabar Online, a moderate news agency. The foreign minister refused to name any individuals or institutions involved in the practice, but estimated the money involved as billions of dollars.

Zarif's comments were apparently meant to address criticism of a controversial bill that has been widening the rift between Iran's Reformists and hard-liners. Iran's parliament approved a proposed law to join the International Convention for the Suppression of the Financing of Terrorism Oct. 7 as a precondition for Iran to be fully removed from the blacklist of the international Financial Action Task Force (FATF). The government of President Hassan Rouhani has been pushing the measure to help fight the impact of sanctions reimposed by the United States after the latter withdrew from the Joint Comprehensive Plan of Action. The ratification of the FATF-related bills would also the Iranian government attain greater financial transparency and improve access to the international banking system. However, the country's hard-liners oppose the measure, considering the four bills — including the one on joining the terror financing convention — a concession to the West.

"Some of those concerns are rooted in honesty. … But others are voicing those concerns for their own financial interests," Zarif said, adding that there were many who benefited from money laundering — a revelation that was more than enough reason for his opponents to relaunch their attacks on the popular foreign minister.

It was no surprise that the harshest response came from parliament member Javad Karimi Ghodoousi, known for his incessant and sometimes personal attacks on Iran's top diplomat. "Zarif is the root cause of most of the woes Iran is currently facing," he said. "By accusing other institutions, he is trying to evade responsibility for the problems he created." The hard-line lawmaker even called for action to take down the foreign minister over his "countless comments against Iran's national security,” adding, “We have no choice but to fast-track an impeachment of this paper tiger."

Hamid Reza Taraghi from the conservative Islamic Coalition Front implied that Zarif must be removed from his post. "If he meant those comments, then the Islamic Republic needs to decide on his fate." The pressure continues to mount. Mojtaba Zolnour, another hard-line parliamentarian, demanded that Zarif offer clear evidence for his claims. "He has leveled accusations against some of the institutions of the Islamic Republic. His comments are signaling Iran's weakness to the other side." A staunch critic of the terror financing bill, Zolnour even spoke of plans to file a lawsuit against the foreign minister.

Although Zarif accused no specific institutions of money laundering, many took his remarks as directed toward such powerful entities as the Islamic Revolutionary Guard Corps and a handful of other bodies reporting directly to the supreme leader and not the president. Notably, Karimi-Ghoddousi is a former member of the IRGC while Zolnour previously served as the supreme leader’s deputy representative to the body.

"Slow down, Mr. Zarif! The enemy is lurking," read Javan, a conservative newspaper with ties to the IIRGC. The daily insisted that Zarif's remarks were playing into the “enemy's” hands.

The endless barrage forced several Reformists to come out to shield the top diplomat. Seyyed Mohammad Sadr from the powerful Expediency Council — whose members are appointed by the supreme leader — said those attacking Zarif were "indeed making revelations against themselves," implying that they are the ones who engage in money laundering. IRNA, the official news agency advancing the views of the Rouhani administration, noted that Zarif's remarks were made out of his "care" for the country and that money laundering is a hidden reality, "the denial of which is a service to the corrupt." Top parliamentarian Alireza Rahimi referred to Zarif's remarks as a "bitter truth" that is not welcomed by those who are resorting to insults to oppose new regulations against money laundering.

But not all moderates stood by the foreign minister this time. Heshmatollah Falahatpisheh, who chairs the parliament's National Security and Foreign Policy Commission, expressed "surprise" at Zarif's "unexpected" comments. On Nov. 11, he announced that the top diplomat had been summoned for explanations before the commission on his "claims" and said that his remarks had created an excuse for the West to pressure Iran.

The foreign minister's controversial interview comes at a moment when the Rouhani administration is awaiting the Expediency Council's ratification of the terror financing bill. Zarif's comments could smooth the bill's passage or make matters worse at a critical juncture.