Congress may resort to parliamentary parlor tricks to pass overwhelmingly bipartisan Syria sanctions legislation because of opposition from one senator. 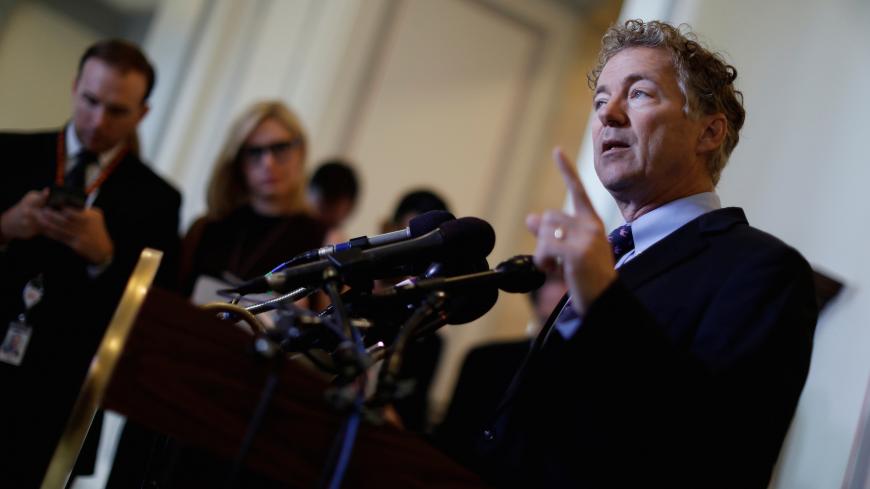 Sen. Rand Paul, R-Ky., speaks at a press conference about the latest Republican effort to repeal and replace the Affordable Care Act on Capitol Hill in Washington, US, Sept. 25, 2017. - REUTERS/Aaron P. Bernstein

Congress is resorting to parliamentary sleight of hand to pass a long-delayed Syria sanctions bill. That’s because a single lawmaker is holding up the overwhelmingly bipartisan legislation in the Senate.

Al-Monitor has learned that Sen. Rand Paul, R-Ky., is holding up the Caesar Syria Civilian Protection Act despite otherwise universal support in Congress and the Donald Trump administration’s endorsement.

Although the House unanimously passed the bill last year, Paul’s maneuvering has forced House appropriators to attach it to must-pass spending legislation to have a chance of getting it through the Senate by the end of the year.

“It infuriates me,” Rep. Eliot Engel, D-N.Y., the bill’s author, told Al-Monitor. “We’re going to hopefully get it attached to the appropriations bill."

Engel made a similar case on the House floor earlier this week, calling on Paul to lift his hold on the bill — without referring to him by name. The White House aided Engel’s effort by issuing a statement endorsing the legislation today.

“At its core, the bill provides additional tools designed to deny the [Bashar al-Assad] regime and its proxies access to the international financial system and to block the financial and other support that fuels the murder of innocent Syrians,” the White House statement said.

Engel, the top Democrat on the House Foreign Affairs Committee, first introduced the bill in 2016, when it was also held up in the Senate. The bill is named after the pseudonym of a Syrian dissident who smuggled out thousands of pictures showing the Syrian government’s abuse and murder of prisoners.

The legislation would sanction Syrian officials involved in human rights abuses and anyone who does business with the Syrian government. It also requires the Trump administration to determine whether Syria’s central bank is a “primary money laundering concern,” which could lead to more sanctions. Additionally, it requires Trump to submit a strategy to Congress on deterring foreigners from signing reconstruction contracts in areas controlled by the Assad government and its allies.

Paul acknowledged that he is blocking a unanimous Senate vote on the bill but referred Al-Monitor to his office for further explanation. His office did not reply to subsequent requests for comment.

The senator tried to attach an unrelated amendment to the bill when the Senate Foreign Relations Committee advanced it earlier this year. At the time, the Kentucky Republican was seeking to remove sanctions on 26 Russian legislators for their involvement in occupying Crimea.

Paul argued that the sanctions inhibited dialogue by preventing the Russian lawmakers from traveling to the United States. The committee rejected Paul’s amendment 20-1.

“I just think it’s outrageous that one person can hold this legislation up when it’s got nothing to do with whatever point he’s trying to prove,” Engel told Al-Monitor.

Americans for a Free Syria, an activist group supporting the bill, was blunter.

“Given Sen. Paul says he believes in individual liberty and has a suspicion of strong, centralized government, it’s bizarre he’s holding water for President Putin and legislators in the Russian Duma who are complicit in backing Assad’s murderous regime,” Jameson Cunningham, the group’s policy strategist, told Al-Monitor. Cunningham went on to urge Senate Majority Leader Mitch McConnell, R-Ky., “to use his leverage to get this bill passed.”

The latest bout of drama on the otherwise noncontroversial Syria bill comes after Congress finally passed the Iraq and Syria Genocide Relief and Accountability Act earlier this week to provide aid to Islamic State genocide victims. That bill, which now awaits Trump’s signature, also endured a multiyear hold in the Senate.

Additionally, Congress also managed to pass a provision setting up a 12-member panel to study Syria policy in October. However, legislators only managed to do so by burying it in an unrelated aviation bill.