Congress is on the brink of sanctioning Syria’s Bashar al-Assad government after three years of struggling to get the legislation approved. 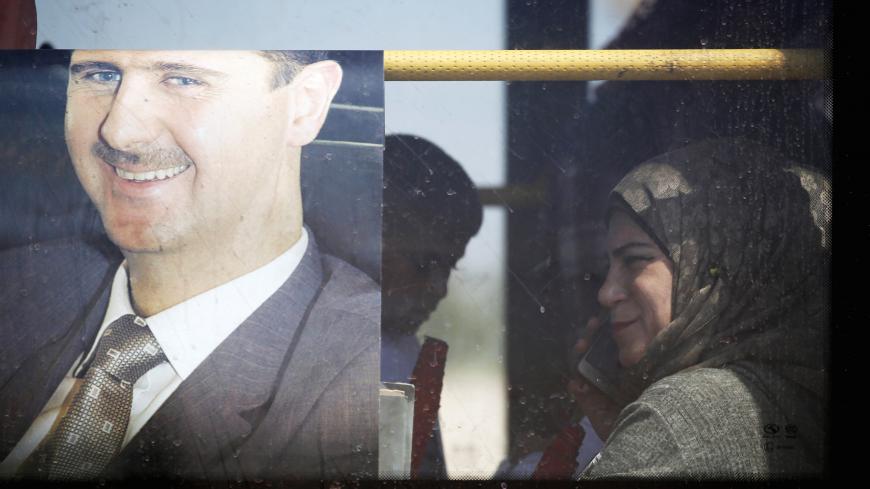 A returnee sits in a bus next to a picture of Syrian President Bashar al-Assad in Qusayr, Syria, July 7, 2019. - REUTERS/Omar Sanadiki

Congress is very close to expanding sanctions on the Bashar al-Assad government and its supporters after three years of struggling to pass the legislation.

Lawmakers have put the Caesar Syria Civilian Protection Act in the annual defense authorization bill that the Senate is voting on this week, marking a significant victory for Syrian American advocacy groups that have lobbied Congress to pass the long-stalled bill.

“My family and I have suffered personally at the hands of the Assad regime,” said Ismael Basha, the president of Americans for a Free Syria. “I have waited my whole life for this. President Assad and his cronies will be held accountable for their countless crimes against the Syrian people.”

Lobbying filing disclosures reviewed by Al-Monitor indicate that Americans for a Free Syria has spent roughly $50,000 since 2017 lobbying Congress to pass the Caesar Syria Civilian Protection Act and other legislation. Citizens for a Secure and Safe America, another Syrian American advocacy group that supports the bill, paid Ballard Partners — the firm led by President Donald Trump’s former lobbyist Brian Ballard — $330,000 to lobby Congress from September 2018 until September this year.

The House overwhelmingly passed the defense bill that includes the legislation 377-48 last week. The Senate begins voting on the same bill today. The White House has previously endorsed both the Caesar Syria Civilian Protection Act and the defense bill.

House Foreign Affairs Committee Chairman Eliot Engel, D-N.Y., first introduced the bill in 2016. Engel successfully fought to include the Syria sanctions in the final defense bill, but ultimately voted against it last week, citing “the misguided decision to remove critical provisions on war powers and efforts to end the bloodshed in Yemen.”

“The Caesar Syria sanctions bill should have been law years ago,” Engel told Al-Monitor. “I’m gratified that my legislation will finally be enacted and will hopefully bring a measure of relief to the long-suffering Syrian people.”

The legislation is named for Caesar, the pseudonym for a former Syrian government photographer who defected in 2013 to reveal more than 50,000 pictures documenting the systematic torture, murder and human rights abuses victims faced in Assad’s brutal prisons.

The Caesar Syria Civilian Protection says that under US policy, “diplomatic and coercive economic means should be utilized to compel the government of Bashar al-Assad to halt its murderous attacks on the Syrian people and to support a transition to a government in Syria that respects the rule of law, human rights and peaceful co-existences with its neighbors.”

The bill would require the Treasury Department to report to Congress on whether the Syrian central bank poses a “primary laundering concern,” potentially leading to sanctions on the state-run financial institution. It would also sanction anyone — including Russian or Iranian entities — that provides “financial, material or technological support” to the Syrian energy, defense and construction sectors.

The sanctions would not be lifted until the Assad government releases political prisoners, stops targeting civilians and restores international aid to opposition-held areas.

“We’ll be following up with the appropriate offices in Congress and the administration to ensure that [the Caesar Syria Civilian Protection Act] is fully implemented,” Erica Hanichak, the government relations director for Americans for a Free Syria, told Al-Monitor. “The United States must use all available pressure on Damascus and Russia to drive talks about a political transition that can bring an end to this crisis.”

The defense bill is widely expected to clear the Senate this week, with Trump’s blessing, marking an end to a three-year saga as advocates lobbied Congress to pass the Syria sanctions.

While the House has passed the bill three times — most recently by voice vote in January — Senate Majority Leader Mitch McConnell did not hold a floor vote on the legislation amid a hold from fellow Kentucky Republican Sen. Rand Paul.

McConnell instead included the legislation in a Middle East legislative package that the Senate passed 77-23 in January. But House Democrats have not put that bill on the floor due to a provision clamping down on the pro-Palestinian boycott movement against Israel amid free speech concerns.