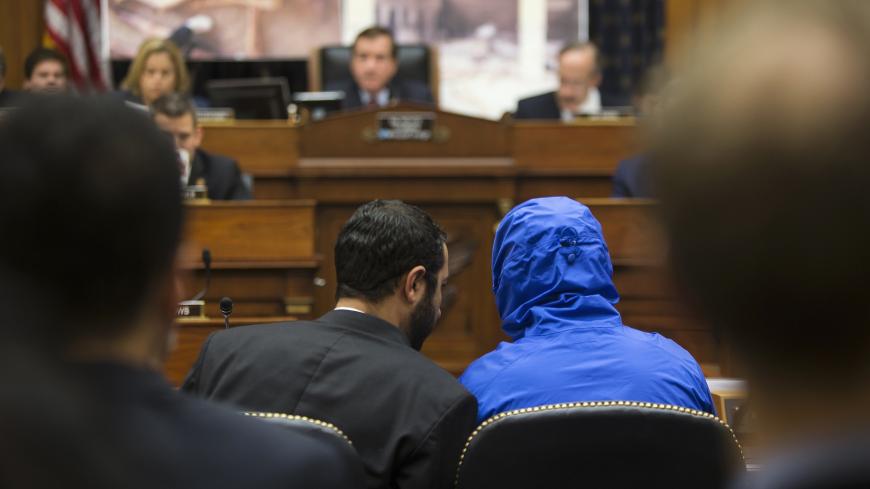 The man credited with smuggling 50,000 photos said to document Syrian government atrocities, a Syrian army defector known by the protective alias Caesar (disguised in a hooded blue jacket), listens to his interpreter as he prepares to speak at a briefing to the House Foreign Affairs Committee on Capitol Hill in Washington, July 31, 2014. - REUTERS/Jonathan Ernst

The Senate has struggled to pass a long-stalled Syria sanctions bill since 2016, even as the House has unanimously passed the largely noncontroversial legislation several times.

The Senate Foreign Relations Committee finally advanced the Caesar Syria Civilian Protection Act by a 20-2 vote today. But first, lawmakers had to vote down an amendment barring the Donald Trump administration from attacking Iran.

The committee voted 13-9 against an amendment from Sen. Tom Udall, D-N.M., that would have barred funding “for kinetic military operations in or against Iran except pursuant to an act or joint resolution of Congress specifically authorizing such use.”

“We want to prevent a war that Congress does not authorize,” Udall said ahead of the vote.

The vote followed the Trump administration’s congressional briefing on Iran on Tuesday, which left Democrats fretting over the risk of a military confrontation as tensions mount between Washington and Tehran.

“They said we’re doing all these activities to prevent a war, but not once did they say if we’re going to war, we’re going to come to you and ask for permission,” Udall said.

Democrats fear that the Trump administration could use the 2001 authorization for military action against al-Qaeda and other terrorist groups as legal cover to attack Iran.

Pressed by Sen. Rand Paul, R-Ky., last month, Secretary of State Mike Pompeo refused to state that the 2001 authorization does not apply to Iran and instead accused Tehran of supporting al-Qaeda. But the Daily Beast reported Tuesday that senior administration officials told lawmakers during this week’s Iran briefing that they have no evidence that Iran meaningfully cooperates with the militant group.

The Udall amendment doesn’t preclude US forces from defending themselves in the event of an attack. But several Republicans on the committee argued that Iran could construe it that way, raising the risk of miscalculation leading to military conflict.

“Not only would it undercut the efforts to send a very strong signal on Syria, which is what we want to do, I think it would send the wrong signal to our adversaries of a country intent on killing Americans,” said Sen. Lindsey Graham, R-S.C.

Paul was the only Republican to vote for the Udall amendment. Foreign Relations Chairman James Risch, R-Idaho, managed to forestall a similar defection from Sen. Todd Young, R-Ind., by promising that the committee would hold a hearing to examine existing military authorizations.

Nonetheless, the committee’s top Democrat, Sen. Bob Menendez, D-N.J., and Sen. Chris Coons, D-Del., bucked the rest of their caucus to side with Republicans against the Udall amendment.

Menendez argued that passing the Udall language “would sink the entire bill” due to a lack of Republican support. He added that he had included language noting that the Syria sanctions legislation was not an authorization to use military force against Iran.

“I agree with your concerns,” Menendez told Udall ahead of the vote. “This is a serious bill that has been introduced in the past three congresses to address the abuses of the Syrian government against the people of Syria. Those abuses continue today and we actually have an opportunity to get this to the president’s desk so that he can sign it.”

The Caesar Syria Civilian Protection Act would sanction supporters of the Bashar al-Assad government while requiring the Treasury Department to determine whether it should sanction Syria’s central bank.

Paul, who joined Udall in voting against the final bill, had held up the legislation previous years. This prompted his fellow Republicans to include it in a broader Middle East legislative package earlier this year. That package passed the Senate 77-23, but House Democrats have refused to put it on the floor over a provision cracking down on the pro-Palestinians boycott, divestment and sanctions movement, which they say raises free speech concerns.

Today’s committee vote paves the way for a final Senate floor vote and comes after a senior administration official told Al-Monitor last week that the United States is intent on intensifying the political and economic pressure on Assad.

Ambassador James Jeffrey, the State Department's Syria coordinator, called on Congress to pass the bill during his testimony before the House Foreign Affairs Committee today. He also reiterated the State Department’s allegation that the Assad government may have again used chemical weapons in its offensive against the last rebel enclave in northwest Syria.

While Jeffrey stressed that the United States has not reached a final conclusion, the Britain-based Syrian Observatory for Human Rights said today that there’s no evidence of a new chemical weapons attack.

Congress has also taken the case for more pressure on Assad directly to Trump, with nearly 400 lawmakers signing onto a letter this week asking the president to increase pressure on Iran and Russia in Syria in order to bolster Israel’s security. The letter, which the American Israel Public Affairs Committee lobbied for during its annual policy conference in March, also asks the Trump administration to increase sanctions on the Lebanese paramilitary group Hezbollah and its supporters.