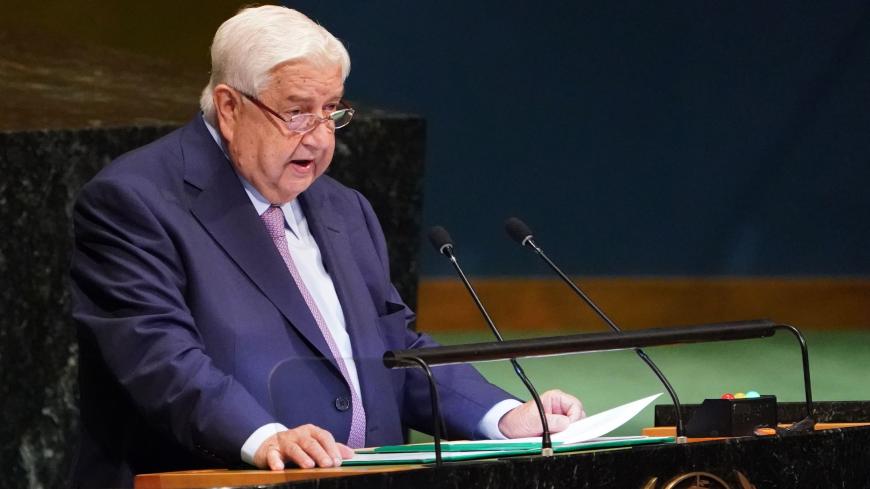 Late last month at the UN General Assembly in New York, Bahrain’s Foreign Minister Khalid bin Ahmed Al Khalifa warmly embraced his Syrian counterpart Walid Moallem. The encounter raised many questions about Bahrain and, by extension, other Arab Gulf states’ current Syria policy. The following day, Khalifa stood by his decision to meet with Syria’s top diplomat, stating that it was “unplanned” and that both officials had had previous meetings at earlier junctures in the Syrian crisis.

In his words: “Greetings among brothers are a must, but this meeting took place at a time when the Arab stance is going through positive changes to ensure Arab action and activities on the Syrian issue. There is a need to re-take the Arab lead. Syria is an Arab country and its people are Arab brothers, and whatever is happening there concerns us before any other nation. Unfortunately, regional and international states are looking into the Syrian issue whereas we Arabs are absent.”

The encounter and Khalifa’s defense of it took scores of observers by surprise, perhaps for good reason. That Manama and Damascus’ chief diplomats were extremely cordial was quite contradictory, at least on certain levels. After the Syrian crisis erupted, Bahrain — along with all other Gulf Cooperation Council members, except Oman — recalled its ambassador from Damascus. In February 2016, the island kingdom threatened to join Saudi forces in waging a military intervention in Syria, resulting in Moallem responding that such a campaign against Damascus would result in Bahrainis and Saudis returning to the Arabian Peninsula in “coffins.” In April 2017, Bahrain backed the Donald Trump administration’s decision to fire dozens of missiles at the Shayrat air base near Homs in retaliation for a chemical attack. Thirteen months later, Manama also supported Israeli military strikes against the Syrian army.

Yet Bahrain’s true position on the Syrian crisis itself has had contradictions, particularly since Russia’s military interfered in the civil war in September 2015, which shifted the balance in Bashar al-Assad’s favor. In February 2016, King Hamad bin Isa Al Khalifa visited Russian President Vladimir Putin in Sochi for a highly symbolic meeting in which Putin gave the Bahraini ruler a stallion and the king presented Russia’s leader with a sword made of Damascus steel, called a “sword of victory.” Certain analysts interpreted those words to reflect Manama’s support for Moscow’s direct military intervention in Syria, which ultimately amounted to direct or indirect support for Assad’s regime.

Immediately after King Hamad’s meeting with Putin, Russian Foreign Minister Sergey Lavrov stressed that “both Russia and Bahrain want to see a stable Syria, a country in which the foundations of the secular state are strengthened, a country that ensures its territorial integrity and within the framework of which the rights of all its citizens, without exception, are guaranteed.”

Perhaps like Jordan, Bahrain changed its views on the Syrian crisis significantly following the meteoric rise to power of the Islamic State (IS) in 2014. Given the threat that Bahraini Salafi jihadis who have joined IS’ ranks in the Levant pose to the island kingdom and Manama’s Arab allies, Bahrain’s leadership may have ultimately welcomed Russia’s intervention on the grounds that Moscow could effectively weaken IS, even if it entailed the regime in Damascus staying in power in line with the Kremlin’s interests.

Regardless of the Manama regime’s outlook on the Syrian crisis and the prospects of Damascus returning to the Arab fold, all of Bahrain’s major foreign policy decisions must receive the green light from Saudi Arabia. Unquestionably, Bahrain’s sovereignty has been a price paid for Saudi assistance to the archipelago kingdom since the crisis of 2011 broke out. Manama’s foreign policy has been in lock-step alignment with Riyadh’s throughout the post-Arab Spring period, as highlighted by Bahrain’s position on the Iranian nuclear accord, Egypt’s 2013 military takeover, Yemen’s Houthi rebellion, the blockade of Qatar and Arab outreach to Israel. Therefore, odds are good that Bahrain’s foreign minister embraced his Syrian counterpart only after having received permission from Riyadh, which is yet another indicator of Saudi Arabia’s move away from the "Assad must go" position, rigidly held by the kingdom earlier in Syria’s civil war.

Damascus has achieved important steps in normalizing its diplomatic and/or economic relations in the Arab world, such as with Egypt in 2013, Tunisia in 2015 and earlier this year with Jordan. Yet the restoration of ties between Damascus and the Arab Gulf monarchies that firmly supported the predominantly Sunni rebellion would truly mark a watershed in Assad’s return from the cold to Arab diplomacy.

To be sure, Manama or Riyadh officially normalizing diplomatic relations with Damascus may not come in the immediate future, as more time may be required to prepare for the painful, yet most likely highly pragmatic, decision to accept the Syrian regime and to engage at all levels. Sensitive issues, including backlashes at home from Islamists, may prompt such officials in the Gulf to move cautiously in engaging an Iran-allied, Alawite-led regime.

Finally, it is worth asking how the Saudi or Bahraini leaders could sell such a move to the public as something other than an Iranian victory in the Syrian civil war. The answer is that Riyadh and Manama will likely give strong support to the Trump administration’s efforts to eject Tehran’s influence from Syria with the hope that Western and regional states can pressure Assad’s regime to distance itself from Iran, realigning more closely with fellow Arab states and accepting Russia — not Iran — as the dominant foreign linchpin in Syria’s (in)security architecture.