Al-Monitor interviewed the spokesman of the National Liberation Front, which includes several armed opposition factions in northern Idlib, to find out its goals and plans for the future. 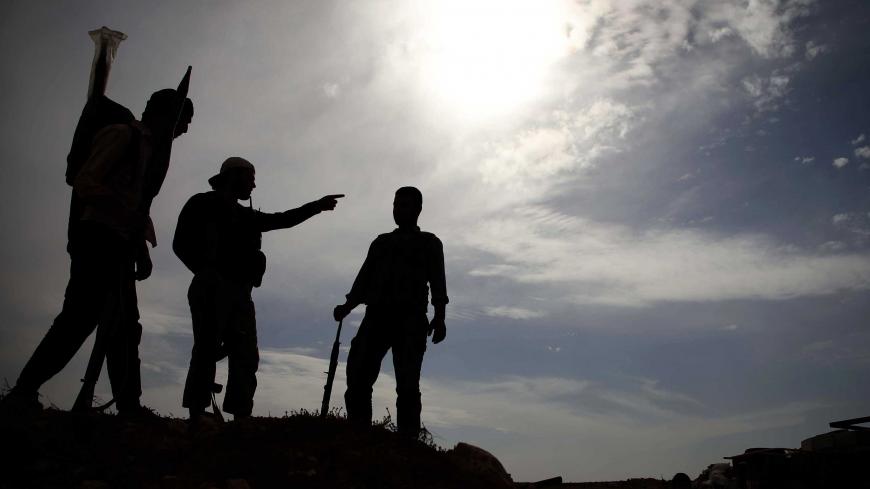 IDLIB, Syria — An alliance of opposition factions under the umbrella of the National Liberation Front (NLF) marked a shift in the balance of power in Idlib Aug. 1, as it rose as a rival to Hayat Tahrir al-Sham (HTS) that controlled Idlib before the NFL emerged.

Apart from other small armed factions, the NLF and HTS represent the main opposition in Idlib. Each party has its own road checkpoints and city entrances. HTS controls the Turkish-Syrian borders reaching Idlib, while the NLF is deployed in eastern and southern Idlib.

While many states classify HTS as a terrorist group, the armed factions in Idlib consider the NLF a shield against inclusion on terrorist lists, which explains the increase in the number of factions under its wing.

Al-Monitor interviewed the official spokesman of the NLF, Naji Mustafa. The text of the interview follows:

Al-Monitor:  What is the NLF? What are the factions operating under its wing?

Mustafa:  The NLF is an alliance including Syrian factions opposed to Bashar al-Assad’s regime and committed to the principles and goals of the Syrian revolution. Its history is rife with fighting the regime and engaging in offensive and defensive battles against its militias and backers. The following factions currently operate under the command of the NLF: Sham Legion, Free Idlib Army, Jaish al-Nasr, Elite Army, 1st Coast Division, 2nd Coast Division, Al-Forkh 23, Ahrar al-Sham, Nureddin Zengi Brigade, Jaish al-Ahrar, Suqour al-Sham Brigades, Damascus Gathering, Horya Brigade and the 1st Infantry Division.

Al-Monitor:  To what extent do the NLF constituents cooperate? Have you reached the phase of complete integration?

Mustafa:  The NLF operates under the leadership of a joint command council that represents all constituents. The commander in chief is Brig. Gen. Fadl Allah al-Hajji, and there is a chief of staff, a political bureau and other administrative offices. The military decisions and stances are taken within the command council to reach a united decision that binds the NLF factions. The constituents enjoy a high level of coordination, interaction and commitment. Intensified regular and exceptional meetings are held to address current affairs. Although each faction keeps its own internal structure, the NLF treads firmly to develop relations among its constituents to reach complete integration.

Al-Monitor:  How can you describe relations between the NLF and Turkey? Do you receive support from Turkey?

Mustafa:  We have very good relations with our Turkish fellows. We share brotherly ties and common interests. We value the role of the Turkish government and people in supporting the revolution of the oppressed Syrian people ever since they launched their peaceful protests. Turkey has continued to support the Syrian people’s quest for freedom, dignity and eradication of injustice and tyranny. The NLF factions received support from Turkey even before the formation of the front. After its formation, Turkey continued to offer them logistic and financial support.

Al-Monitor:  What is your take on the Turkish-Russian agreement on Idlib in Sochi?

Mustafa:  The NLF is militarily ready to expel the regime from Idlib and its surroundings. But we welcomed Turkish efforts to prevent this attack that the Russians and the regime were preparing, just like in Ghouta and Daraa to name a few. Such an attack might result in a humanitarian crisis that would hurt millions of civilians in northern Syria.

We discussed the provisions of the agreement with Turkey, and we approved of it after making sure that we would not be forced to retreat from our positions and checkpoints, and that we would not have to hand over our weapons to any party. We also made sure that the regime institutions would not enter [Idlib] and that Russian patrols would not be deployed in the buffer zone, as they had hoped for initially. The Russians were hoping for this, but we refused.

Al-Monitor:  Do you think the Sochi agreement will end the clashes with the regime? What is the next step?

Mustafa:  We are dealing with this agreement as a temporary phase that the regime and its Russian ally will breach, just like they violated all previous treaties and charters. Russian officials’ statements — saying “the agreement is temporary” — prove this. Therefore, we should be ready for all possibilities. We will proceed with our reinforcements and preparations, knowing that the revolution will go on until the criminal regime is toppled and our objectives are met.

Al-Monitor:  If the Sochi agreement is implemented, it would avert a huge humanitarian crisis temporarily in Idlib. What do you think of Idlib’s security and service administration?

Mustafa:  If the agreement is implemented, the city would be relatively calm and stable. Therefore, a pressing need for arranging the service and administrative situation arises. Efforts are being made in this regard. A negotiation committee made up of different powers and bodies was formed to discuss calls for a general conference for all revolutionary forces in the north to create a new administration to govern the liberated areas. We will cooperate with these efforts that might lead to a comprehensive national conference, giving rise to a united government for the liberated north.

Al-Monitor:  Several armed groups in Idlib — like the Guardians of Religion Organization — objected to the Sochi agreement. What is your take on this stance? What will you do if these groups try to impede the agreement?

Mustafa:  The NLF is holding internal deliberations among its constituents and with Turkey about the agreement implementation mechanism. It is too soon to talk about its obstruction from any party.

Al-Monitor:  Sporadic clashes have been erupting between HTS and NLF factions. What is the future of your relations with HTS, knowing that several regional countries — including Turkey — classify it as terrorist?

Mustafa:  It is the NLF command council that defines relations with the military forces and the civil committees in the north, and it has yet to issue a new stance in this regard.

Al-Monitor:  The US-backed Syrian Democratic Forces control wide stretches of land in northeastern Syria. How do you describe your relations with the SDF?

Mustafa:  The SDF are made up of terrorist parties seeking to divide the country while forcibly displacing and mistreating our people. They oppose the revolutionary factions. Since the Kurdistan Workers Party and the Democratic Union Party spearhead these forces, we consider them separatist and terrorist groups we cannot deal with. We will liberate our lands from them and from the criminal regime. We will save our people from their injustice.

Al-Monitor:  What do you think is the comprehensive solution in Syria? Do you have preset conditions, or do you prefer division?

Mustafa:  We are a Syrian constituent of the revolution, and we are committed to its goals. The only solution is to topple the regime, prosecute its elements and achieve our people’s goals and aspirations to build a free, just and lawful state. We refuse division and want Syria to be united and cleansed of the terrorism of Assad, his thugs, and the Iranian and Russian occupying forces.