Israel considers Qatari financial aid to Gaza a lifeline with the potential to prevent or at least postpone another war in the south. 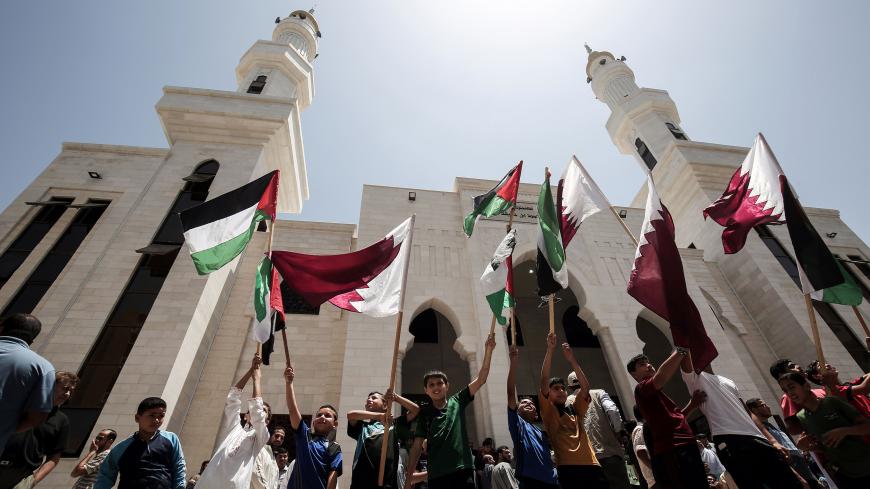 Palestinians attend a rally in support of Qatar, at the Qatari-funded housing project in the southern Gaza Strip city of Khan Yunis, June 9, 2017. - SAID KHATIB/AFP/Getty Images

Israel and Qatar have been growing closer over the last few months as a result of their joint efforts to save Gaza from collapse and prevent another war between Hamas and Israel. Still, the relationship is something of a paradox. In the past, Israel regarded Qatar as a country that aided Hamas, a terrorist organization. (Much to Israel’s chagrin, the former ruler, Emir Hamad bin Khalifa Al Thani funneled huge amounts of money to Gaza). But now Israel is pleased that the current ruler, Emir Tamim bin Hamad Al Thani, is providing Gaza with financial support. While Qatar is continuing its tradition of aiding the Hamas regime, it is also helping Israel avoid another war. In that way, everyone benefits from the wealth and munificence of the tiny emirate.

Israel’s political and security apparatus considers Qatar’s aid activities a lifesaver with the potential to prevent or at least delay another war between Gaza and Israel. Nevertheless, the two countries' increasing closeness has been kept discreet, largely out of fear that Egypt might see it as a way of subverting the boycott it imposed on Qatar in 2017. This discretion explains why a meeting that took place in Larnaca last June between the Qatari emissary to Gaza, Mohammed al-Emadi, and Israeli Defense Minister Avigdor Liberman was not covered by the press. News of the meeting was only revealed by Israel’s Channel 10 some two months later. According to the report, Qatar committed to investing $350 million to advance certain projects in the Gaza Strip and to pay the salaries of government employees there.

Qatar wants to spare Hamas from another round of bloodshed that everyone says could erupt at any moment. It also wants to preserve Hamas' rule. But Qatar has another reason it might want to grow closer to Israel. In August 2017, Qatar renewed its ties with Iran, vexing several neighboring Sunni countries. On the backdrop of the economic sanctions and boycott by Sunni nations, the emirate wants to forge closer ties with the US administration, something the Qataris believe could help lift the siege.

To achieve this objective, the country has hired a media consultant (political strategist Nicolas Muzin) identified with the American Jewish right. It has also launched an extensive campaign — “Don’t let Qatar fall into the hands of Iran" — among the Jewish community so that the powerful and influential Jewish lobby would help win it the support of the current administration. Interestingly, Qatar’s efforts to get the siege of Gaza lifted could get Qatar’s own siege lifted too.

In February, President Donald Trump’s adviser for Middle East affairs, Jason Greenblatt, said that cooperation between Israel and Qatar would help Gaza. Greenblatt was voicing the administration’s position that Qatar is the bridge connecting Hamas and Israel. His comments came in response to Al-Emadi's Feb. 22 interview with Reuters in Jerusalem. In it, he admitted that the money that Qatar was transferring to Gaza was helping Israel avoid another war. He added that this aid had the support of the United States and that this level of cooperation was proof that Doha was distancing itself from Hamas. This in itself is another paradox, since the money that Qatar was giving to Gaza was helping the Hamas regime stay in power.

Israel once accused Qatar of aiding a terrorist group. However, with the United States interested in keeping Qatar out of Iran’s grasp and with the Jewish lobby working on the Emirate’s behalf, Israel has grown supportive of the Qatari emissary’s activities. In so doing, it is making it possible to save Gaza before another war erupts in the south.

At the beginning of October, it was reported that Qatar is providing emergency aid to Gaza by way of Israel. As soon as the money was transferred to Gaza, there was a race against the clock to provide Gaza with the diesel it needed to keep its local power plant running. The first convoy of tanker trucks made its way through the Kerem Shalom border crossing into Gaza Oct. 9. The number of tanker trucks crossing daily into Gaza is expected to grow to 15 by the end of the month. The regular supply of diesel will ensure that every home in Gaza will have as much as eight hours of electricity a day for the next four months.

In addition to this operation, for the first time ever, Israel approved the transfer of Qatari funds directly to Gaza, without going through the Palestinian Authority. Al-Akhbar reported that the money is earmarked specifically for civilian salaries and not for members of the Hamas security forces, though it remains unclear what kind of oversight could be put in place. What this means is that Israel has given a green light to Qatari funding of the very mechanism with which Hamas maintains its control over Gaza.

A source in the Civil Administration told Al-Monitor that the Qatari emissary has an open line to Israel. In recent months he had visited Israel and Gaza practically once a month. But given the growing tension in Gaza, his visits now are even more frequent. He is in direct contact with the head of the Civil Administration, as well as with Minister for Regional Cooperation Tzahi Hanegbi, Israel's representative to the Committee for Donor Nations. It has already been noted that Al-Emadi even met with Liberman — no small matter, considering the significance of an official Qatari emissary meeting with an Israeli defense minister. In his defense, it is easy to explain that the meeting was intended to prevent bloodshed.

An improved relationship between Israel and Qatar could contribute to future economic cooperation in many different fields. Israeli businessmen think of Qatar as a gold mine whose potential has yet to be tapped. Israel’s Bureau of Economic Interests in Doha was closed several years ago, but given the closer relations now developing with Qatar, Israeli industrialists and tech entrepreneurs could have an easier time obtaining visas to visit the country.