Will Israel, Qatar cooperate to save Gaza?

US Middle East envoy Jason Greenblatt called for Israel and Qatar to cooperate in order to save the Gaza Strip from a humanitarian crisis. 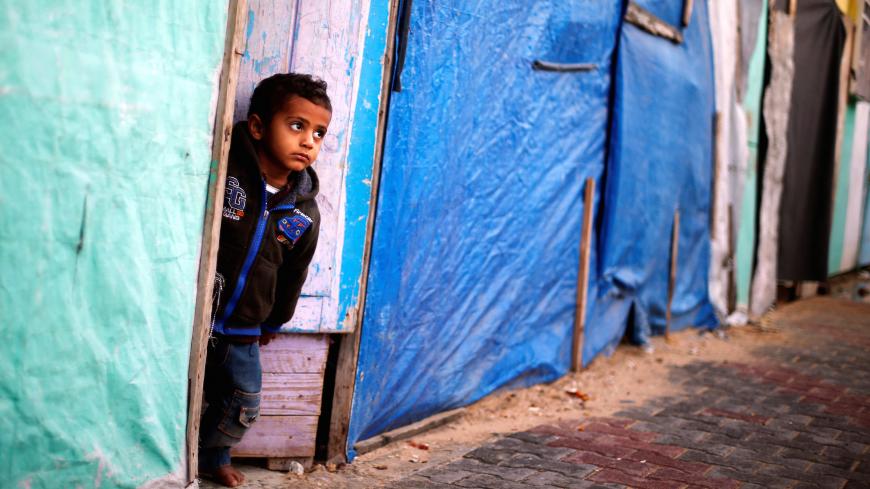 A Palestinian boy who lives in a container as a temporary replacement for his house that was destroyed in the 2014 war looks out on a rainy day in Beit Hanoun in the northern Gaza Strip, Dec. 15, 2016. - REUTERS/Suhaib Salem

The latest tweets by US Middle East envoy Jason Greenblatt have surprised many. He tweeted Feb. 9, for instance, about the suffering of the Gaza Strip’s residents and the concern for the burden they are enduring under Hamas rule, and thanked Egypt for agreeing to open the Rafah crossing into Gaza to let people and goods in and out. Greenblatt also argued for the first time — and one cannot ignore the fact that he speaks for the Trump administration — that only cooperation between Israel and Qatar would save Gaza.

Greenblatt linked one of his tweets to an interview with Mohammed al-Emadi, the head of Qatar’s Gaza reconstruction committee, who explained to The Associated Press, “When you want to do work in Gaza, you have to go through the Israelis.” Emadi visited the Gaza Strip several times since the 2014 war between Gaza and Israel. In March 2015, he met with Israel’s Coordinator of Government Activities in the Territories, Maj. Gen. Yoav Mordechai, to discuss the execution of major projects in Gaza with Qatari funding.

The idea of Israeli-Qatari cooperation came up in recent weeks in Washington after President Donald Trump spoke with Qatari Emir Sheikh Tamim bin Hamad Al Thani on Jan. 15. A few days before that phone call, in a Jan. 12 article that ran on the political website “The Hill,” Trump’s friend and confidant attorney Alan Dershowitz wrote that he had just returned from a visit to the emirate, where the emir had adamantly denied any Qatari support for Hamas or Iran. Dershowitz, a longtime supporter of Israel, opined that therefore, Qatari investment in rebuilding Gaza’s infrastructure must be carried out in coordination with Israel. The article praised Qatar and gave it a stamp of approval despite the sanctions imposed on the small Arab state by two major US allies in the region, Saudi Arabia and Egypt.

The ties between Qatar and Hamas were never a secret. The emirate welcomed the movement’s political bureau and its former leader Khaled Meshaal and provided them with a warm home; the movement’s current head, Ismail Haniyeh, refers to the emirate as Hamas’ sworn friend. Former Emir Hamad bin Khalifa Al Thani, Tamim’s father, visited Gaza after the 2012 military clash between Hamas and Israel, traveled through the Gaza Strip in a black Mercedes driven by Haniyeh and pledged to invest hundreds of millions of dollars in rehabilitation projects.

In recent years, Qatar has funded the paving of roads and construction of homes for young couples, and has paid for other infrastructure projects. In the frequent electricity supply disruptions that have darkened Gaza in recent years, Qatar came to the rescue by paying for diesel fuel to run the Gaza Strip’s sole power station.

Since the Arab sanctions imposed on Qatar in July 2017, providing its aid to Gaza has become more complex and complicated. Egypt refuses to allow the passage of goods or raw materials bearing Qatari fingerprints into the Gaza Strip through its territory and border crossing. In that sense, Egypt holds the key to saving Gaza from a humanitarian crisis, just as much as Israel, which has been blockading Gaza for over a decade since Hamas came to power. When Egypt wants to, it can open up the Gaza Strip to the world. When it does not, it closes the gates and leaves Gaza in a tight stranglehold.

Until several weeks ago, it seemed the salvation would come from Cairo, which was exerting heavy pressure on the rival Hamas and Fatah organizations to reconcile. However, all signs now indicate that Egypt has also despaired of the promised reconciliation that would have restored control of Gaza to the Palestinian Authority and thus enabled the lifting or easing of the blockade. Egypt has given up, and its Rafah crossing, the lifeline that Gazans had hoped would hook them up to the outside world, will remain cut off.

Although Greenblatt congratulated Egypt last week on its planned opening of the crossing, it appears that Egypt only kept the passage open for a few hours. Its renewed closure left some 400 Gaza residents stranded in Egypt, and hundreds of others who had planned to cross into Egypt were forced to stay behind until Egypt once again deigns to open the gates, if only for several hours. Egypt, which has been leading the Arab world’s campaign against the “wayward” Qatari emirate, will probably not allow passage of humanitarian aid for Gaza through its territory and thus, the only option for saving Gaza is through Israeli-Qatari cooperation, as Trump’s envoy rightfully argued.

Nonetheless, how can one imagine Israeli cooperation with a state accused by its fellow Arabs of support for Iran and aid for Hamas? In his article, Dershowitz sought to address this issue and disperse the black cloud hanging over Qatar.

“This is a marriage of last resort,” a Fatah official in Gaza associated with former Fatah senior Mohammed Dahlan told Al-Monitor on condition of anonymity. According to this source, Dahlan is mobilizing donations to save Gaza’s population and Qatar is just one of the donors. The source confirmed that Egypt will not hear of allowing Qatar-funded aid trucks to enter Gaza, and therefore the only remaining passage is through Israel’s Kerem Shalom border crossing, with the knowledge that this serves all sides involved.

Much about the US-Qatar-Israel triangle is unclear. For example, what motivates the Trump administration to absolve Qatar of responsibility for its support of Hamas and Iran and to undermine the boycott led by its regional Saudi and Egyptian allies. Qatar, for its part, is using Washington in an effort to extricate itself from the Arab sanctions. Aid for Gaza through Israel with the support of the Trump administration is intended to buy Qatar some of the brownie points it so badly needs — even at the cost of a public link with Israel.

Al-Monitor has reported extensively in recent months on the deepening crisis in the Gaza Strip. Briefing the government on Feb. 4, military Chief of Staff Lt. Gen. Gadi Eizenkot warned that Gaza was on the verge of a humanitarian disaster. Despite his doomsday scenario, not much has been done since. Since Hamas continues to threaten Israel and to increase its military capabilities, Israel is left with just a small margin for maneuver. Also, the donor states that convened in emergency session last month in Brussels have not come through yet, leaving only Qatar that is willing to come to the rescue at once. Paradoxically, the US president who last month suspended tens of millions of dollars in US funding for the UNRWA — the UN aid agency for Palestinian refugees that supports most Gaza residents — and only made matters there worse has now become the leading sponsor of the plan to save the Gaza Strip.