The strategy of Prime Minister Benjamin Netanyahu against a possible indictment includes early elections and the appointment after of yes-men for the positions of IDF chief of staff and police commissioner. 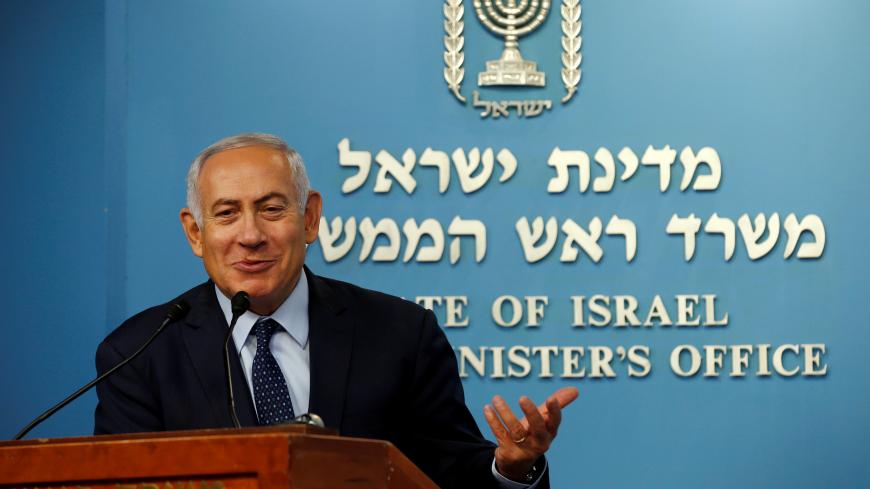 At a rare meeting with journalists on Oct. 9, Prime Minister Benjamin Netanyahu was asked whether he would try to use his parliamentary immunity to protect himself if Attorney General Avichai Mandelblit indicts him early next year. Netanyahu claimed that he knew nothing about that, adding that the question is irrelevant because "I don’t believe I will be indicted."

People close to Netanyahu will swear that he is completely convinced that despite the investigations, the testimonies and the leaks, despite all the recordings and the (three) state witnesses, in the end, “There will be nothing because there is nothing.” Yet if that really is the situation, Netanyahu would not be getting closer to deciding to advance the election to March 2019.

Although he denied it on Tuesday, no one in Israeli politics doubts that Netanyahu’s main motive in advancing the election is the impending indictments. This comes in addition to all the polls that show his popularity soaring and that he would defeat his opponents easily. This is the real fuel that he needs to speed up the election, and the engine is already running. Netanyahu will make his final decision next week when the Knesset returns for its winter session Oct. 15, or he may make it a week later. Regardless, the time for decisions has come.

Ignoring for a moment the security situation, the drama that Israel can expect next year will have no precedent. The police have completed their work on cases 1000 (suspicions of receiving bribes from businesspeople) and 2000 (plotting for positive coverage with publisher of Yedioth Ahronoth Arnon Mozes) and submitted their recommendations. The State Attorney’s Office is expected to complete its part soon. Very little is left to investigate in Case 4000, which focuses on allegations of bribery between Netanyahu and billionaire Shaul Elovitch, and the police will make their recommendations in that case in the next few weeks. People close to Mandelblit believe that he will announce his intention to submit an indictment against Netanyahu, subject to a hearing, as early as February 2019. Now add an election to this mix. It will inevitably turn into a campaign over Netanyahu’s innocence, pitting the prime minister’s soaring popularity and the excellent state of the country against the stench of corruption rising from the various investigations. It should be interesting.

Netanyahu’s escape strategy is built on several premises. His main assumption is that he must gain a sweeping victory in the polls before the indictments arrive so that he will be in a much stronger position. He can then claim to the attorney general that Israelis voted for him despite all the investigations and testimonies. With greater political strength and an unprecedented number of seats, Netanyahu could perhaps force his next batch of coalition partners to sign an agreement in advance, ensuring that he receives immunity.

In that case, they would not force him to resign, even despite the indictments. Instead, they would wait until he receives the court’s final verdict and is convicted, and until all possible appeals are exhausted. In Israel, such a process could last anywhere from four to eight years — or in other words, two more terms.

Netanyahu knows that there is almost zero chance his partners would sign an agreement like that. In an interview with the News Corporation, Finance Minister Moshe Kahlon said on Oct. 9 that “a prime minister under indictment and after a hearing cannot function.” If this happens (his partners refusing to back him if/when indicted), Netanyahu would focus all of his efforts on the speedy legislation of a personal law, modeled on the French Law (immunity for the head of state while serving), which would keep him from standing trial until the end of his time in office. But even this wouldn’t have much of a chance. On Oct. 8, the News Corporation proposed another option. There is an obscure and often overlooked clause in the law that allows a Knesset member under indictment to ask the Knesset not to lift his immunity so as to avoid judgment. The aforementioned member of Knesset can do so under two conditions. The first is if the indictment against him shows “a lack of good faith.” The second is that the indictment against him shows evidence of discrimination.

It is hard to believe that Netanyahu can convince anyone that Mandelblit, who once served as his Cabinet secretary, suffers from “a lack of good faith.” This leaves the second option: evidence of discrimination. It is certainly Netanyahu’s preferred option. After all, he is the eternal victim of Israeli politics, the man who always suffers from persecution and discrimination, and who takes a bold stand against all the odds. He will claim that Case 2000 should have investigated and indicted opposition Knesset member Eitan Cabel as well for allegedly advancing the Yisrael HaYom Law (limiting the distribution of the right-wing freebie) for inappropriate reasons. While this argument won’t hold water in court, it can still be raised.

Advancing the election would also allow Netanyahu to complete several other important tasks. As of now, he has been blocking the appointment of a new chief of staff for the Israel Defense Forces, for which Defense Minister Avigdor Liberman is responsible because he hopes to appoint a relatively inexperienced officer — Eyal Zamir — who was once his military secretary and is popular with everyone in Netanyahu’s close entourage. Over the next few weeks, Public Security Minister Gilad Erdan is supposed to decide who will replace the current police commissioner. Netanyahu regards these two appointments, but particularly the appointment of a new police commissioner, as vital. They are a real existential need as far as he is concerned. He wants the next commissioner to be one of his own people who will work entirely for him in order to send a message to law enforcement that they cannot continue to challenge him.

If the election is, in fact, advanced, he can put these appointments on hold and postpone them to the second half of 2019. If that happens, the current chief of staff, Gadi Eizenkot, will have his term extended by half a year while a temporary replacement will be appointed for departing Police Commissioner Roni Alsheikh, whom Netanyahu loathes. Then, when Netanyahu puts the next government together from a position of strength, he could nominate a new public security minister after reaching an agreement with him on the next police commissioner.

These are Netanyahu’s plans for survival. Yet history and statistics both show that despite all his games throughout his long career, history will try to subvert even his best-laid plans. Netanyahu can expect to face many obstacles, even after he decides to advance the next election. He may change his mind and then change it back at any given moment. In the end, he knows that even if the most recent poll gives him 31 seats (and his main rival, Yesh Atid head Yair Lapid, just 15 seats), a bird in the hand is still better than two in the bush.

One thing is certain. Netanyahu must arrive at the position of candidate for indictment as a popular, serving prime minister. Another prime minister, Ehud Olmert, resigned before the investigation against him was completed. He was then indicted, convicted and sent to prison. Netanyahu has certainly learned his lesson after what ultimately happened to him.