Will Iran, Turkey jointly confront US influence east of the Euphrates?

Iran and Turkey are gearing their policies in Syria toward jointly tackling the current status quo in northeastern Syria, where US-backed forces constitute a common threat to both Turkish and Iranian interests. 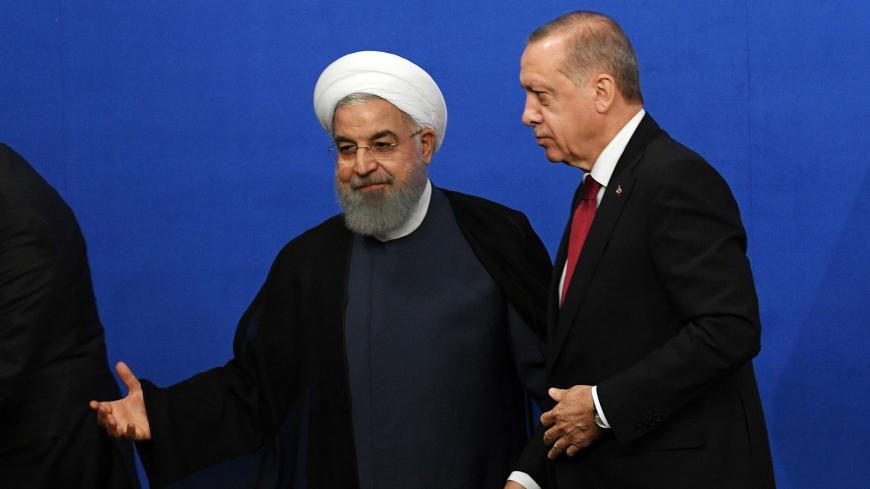 Turkey is facing a new conundrum in Syria. While its main concern is the areas held by the Syrian Democratic Forces (SDF), due to the latter’s links with the Kurdistan Workers Party (PKK), Turkey has had to prioritize Idlib because of the looming attack on the province, which could jeopardize Ankara's presence in northern Syria.

Turkey's stated national security-related reasons for Operation Euphrates Shield in 2016-2017 were reasonable, but its present focus on Idlib is a hard sell — especially to its Iranian and Russian partners on the Astana track. Lacking regional support and necessary leverage in Syria to pursue its objectives both in Idlib and in relation to the SDF, Turkey will likely be enmeshed in the former, disrupting its focus on its primary concern — namely, the situation east of the Euphrates. The Sept. 17 Sochi agreement, which averted a looming operation in Idlib, is a temporary reprieve. To make it permanent, President Recep Tayyip Erdogan has to fulfill Turkey’s end of the deal: to help establish the agreed-upon demilitarized zone; disarm its allied groups; weed out terrorists; and, by the year’s end, open Idlib’s highways to traffic. Forcing this on militant groups such as Hayat Tahrir al-Sham, the Turkistan Islamic Party and the Guardians of Religion Organization — the main forces in Idlib — is a tough job.

Iran, on the other hand, is prioritizing pushback against the United States east of the Euphrates. Tehran’s objective is to restore the status quo in Idlib — under Turkey’s influence — as well as northeastern Syria, where US forces are based. Reiterating Iran’s commitment to a unified Syria, President Hassan Rouhani said at the Sept. 7 Tehran summit, which gathered his Turkish and Russian counterparts, that “we need to resolve the difficulty east of the Euphrates and force America out.” Earlier this year, Ali Akbar Velayati, foreign policy adviser to Iran’s supreme leader, stated that “the Axis [of Resistance]’s forces will not allow the gradual lodgment of the US east of the Euphrates,” adding that “sooner or later, the Americans will be forced out.” The unconfirmed reports about Quds Force commander Qasem Soleimani having warned US commanders in Syria to leave also falls within the same logic.

Against this backdrop, a strategic overhaul of Iranian-Turkish cooperation in Syria is not unprecedented. In 2016, Turkey shifted from its initial position of insisting on regime change in Damascus to a pragmatic issue-based engagement with Iran. This in turn encouraged a shift in Tehran’s pushback against Ankara, leading to its engagement of Turkey in the Astana process. This first shift led to extensive political cooperation that affected developments on the ground. The second phase in Iran’s policy is now unfolding: to accommodate Turkey’s strategic concerns in northern Syria. The first overhaul came as a result of Turkey’s shift from a zero-sum regime-change policy in Syria as well as necessities on the ground and in the political process. The second shift is also driven by necessities on the ground. But it is yet to be seen whether Turkey will embark on it.

Theoretically, Iran’s prioritization of the areas east of the Euphrates puts it on track to accommodate Turkey’s strategic concerns in SDF-held territory. While Turkey perceives the Democratic Union Party (PYD) as a terrorist organization, Tehran sees the PYD’s American patrons as the destabilizing actor. Generally, however, Iran and Turkey’s goals intersect as they both focus on SDF-held territory. Therefore, it is likely that the two will work on the common ground that exists in northern Syria. Turkey’s anti-PYD posture is useful for Iran to effectively push back against the United States. Likewise, to encounter the PYD, Turkey cannot shy away from confronting US policy in Syria — and for that, it needs Iran and the “Axis of Resistance,” which can in effect ratchet up the pressure against the United States east of the Euphrates. On Sept. 24, national security adviser John Bolton stated that the United States is “not going to leave [Syria] as long as Iranian troops are outside Iranian borders,” adding that the latter “includes Iranian proxies and militias.” The consequence of such rhetoric is that Turkey cannot count on US support to contain the “threat” it perceives from the PYD.

As such, the latest phase of Iran’s policy in Syria is premised on Turkey’s shrinking choices in the north of the war-torn country. Ankara’s fears of mounting Kurdish power in SDF-held areas are well understood in Tehran. The Iranians also know that mitigating the “PYD threat” holds higher priority than that of Idlib in Turkey’s national security calculus. Thus, Iran’s support for Turkey in dealing with those concerns can only come after Idlib’s reintegration with the rest of Syria. By setting this chronology, Iran is tackling a minor challenge to pave the way for a bigger one: the fate of the territory east of the Euphrates. In this equation, Turkey cannot continue its compartmentalized issue-based policy and reap Astana’s dividends. In fact, Ankara’s shrinking choices between Idlib and east of the Euphrates indicate the challenging practicalities of its issue-based approach. It will, therefore, have to choose to either work with the United States, which is at odds with anxieties about the “Kurdish threat” as well as its engagement with the Astana track, or to keep working within the Astana trio — which puts it in a hard place vs. the US east of the Euphrates.

The Sochi agreement, at first glimpse, suggests Turkey’s redirection in Idlib. But this can also be a time-buying maneuver. A week after concluding the agreement with his Russian counterpart on Sept. 17, President Erdogan said, “Turkey will take action east of the Euphrates River in Syria and impose secure zones as it has done in the northwest of the country.” This can’t be more welcomed by Tehran. But there are major differences between Idlib and east of the Euphrates, where US forces are based. Erdogan has raised his voice on the situation east of the Euphrates after the Sochi agreement, while two weeks earlier in Tehran he was only “extremely annoyed” with the US policy there. This could be an effort to outsmart Iran and its allies on Idlib by having them back Turkish policy there for a hollow promise of Turkey joining hands with the Axis of Resistance east of the Euphrates.

The Axis of Resistance’s work with Turkey, however, can only materialize in accordance with the Sochi agreement. After all, Iran, Syria and Hezbollah have all endorsed the Sochi accord to give Turkey more time to resolve the standoff over Idlib peacefully. This, by no means, can be interpreted as their acceptance of a continued Turkish presence and opposition control of Idlib. To reiterate this point, Iran will keep reminding Ankara that the status quo in Idlib is unsustainable and that Turkish de-escalation outposts there are part of a consensual decision in the Astana process and, as such, will lose their basic value if Turkey reneges on its commitments. This can well evolve into a military confrontation to force out militant groups and Turkish outposts in and around Idlib — for which the Axis of Resistance is much more experienced. For now, however, Iran and the Axis of Resistance seem hopeful about joining hands with Turkey in northern Syria, provided that Turkey appreciates the linkage between Idlib and the fate of the territory east of the Euphrates. If it doesn’t, then a costlier approach awaits both parties in northern Syria.