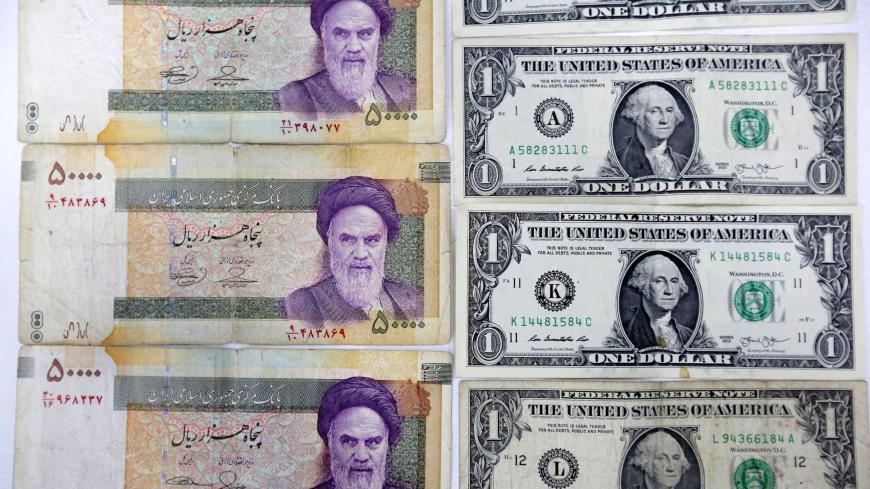 A close-up shows Iranian rial banknotes bearing a portrait of the founder of the Islamic Republic, Ayatollah Ruhollah Khomeini, next to US dollar bills featuring the first US president, George Washington, in Tehran, April 10, 2018. - GETTY/Atta Kenare

The foreign exchange policies that have emerged in Iran in the aftermath of the sudden devaluation of the national currency have not only worsened the sense of instability in Iran’s economy, but also paved the way for an increase in smuggling. Incidentally, smuggling is taking place in both directions, into and out of the country, damaging the overall trade and payment balances and economic performance as well as intensifying corrupt practices.

In a healthy economy, the devaluation of the national currency — though inflationary — could theoretically lead to a growth in exports and a reduction in imports. Such an outcome could benefit domestic industry, which would become more competitive in export markets and also against imported goods. However, the existence of economic distortions such as subsidies or multitiered exchange rates can lead to scenarios in which a currency devaluation can undermine overall economic performance. What Iran is experiencing today is a reminder of how mismanagement of economic affairs can hurt a resourceful economy.

Smuggling has always been part of the economic picture in Iran. In many cases, smuggling has been used to import products that cannot be brought in legally, but smuggling due to economic disparities and price differences has also taken place extensively. Most significantly, in the past few decades the smuggling of subsidized goods, especially fuel, to neighboring countries has damaged the Iranian economy extensively. In the past, Iranian authorities tried to contain fuel smuggling through rationing and stricter controls in border regions; however, the most effective instrument was the pricing of fuels. In 2011, when the first phase of the subsidy reforms started, fuel smuggling was reduced considerably.

However, the recent devaluation of the national currency has made fuel smuggling lucrative again as subsidized fuel is much cheaper in Iran than in all neighboring countries. According to the latest estimates, between 20 million and 40 million liters (5.3 million to 10.6 million gallons) of fuel is smuggled out of the country on a daily basis, imposing an economic damage of 365 trillion rials (close to $4 billion at the median of the three existing exchange rates) per year. The sad reality is that the proceeds of such smuggling go into the pockets of corrupt networks that have the means to organize the movement of these huge volumes across the borders. In fact, a provincial official in Sistan-Baluchistan stated recently that the operations relating to fuel smuggling were not just limited to border provinces, meaning that a large nationwide network is engaged in such lucrative smuggling. In the meantime, while the government is considering approaches such as rationing, past experience has shown that fuel prices are the only instrument that will contain smuggling effectively.

The same pattern is currently true for other subsidized goods such as pharmaceuticals and foodstuffs. In fact, cross-border smuggling of foodstuffs has grown sevenfold and the smuggling of livestock fourfold since the rial devaluation started in March. Such illegal activity not only undermines economic performance, but also leads to shortages of foodstuffs in the country, especially in border regions.

Unfortunately, the tale of smuggling activities is not limited to the illegal trade in subsidized goods. As a consequence of the new realities in foreign exchange markets, other forms of smuggling are taking shape. In fact, in those categories of goods where domestic producers have become more competitive as a result of new exchange rates, smuggling allows interest groups to circumvent customs tariffs and expenses by using illegal import routes. One such example is the textile industry. According to Mohammadreza Pourebrahimi, head of the parliament’s economic commission, some $2.5 billion worth of textile products — more than 30% of the country’s annual consumption in this sector — is being smuggled into the country. Similar patterns can be observed in other light industries such as food and tobacco products.

Meanwhile, many exporters are not repatriating their export earnings through official channels. Foreign exchange regulations instruct exporters to repatriate their hard currency revenues through the exchange system known as NIMA. However, the NIMA exchange rate is less than two-thirds of the free-market rate and there is a huge incentive to smuggle goods out of Iran so that exporters can use the higher rate. This deprives the economy of its hard-currency potential and allows interest groups to benefit from the differential between the two exchange rates. Furthermore, the non-repatriation of some of these export revenues deprives Iran’s importers of hard-currency resources needed for their businesses. Recently President Hassan Rouhani instructed authorities to consider exporters who do not repatriate their export revenues within three months as smugglers. Though instructions like this show the government's resolve to regulate the market, the main reason for the failure of exporters to offer their hard currency through the existing officials channels is the rate differential.

A recent study that looked at the share of smuggling in the Iranian import trade over the past four decades identifies two important paradigms. The first is a meaningful reduction of smuggling in 2001, when the Khatami administration unified the multitiered exchange rates and removed the core incentives for smuggling activities. The second was the considerable growth in smuggling activity after the introduction of severe external sanctions in 2011. In fact, following those sanctions, the share of smuggling in Iran’s imports went up from 25% to 60%. Although in some cases sanctions only provided an excuse to smuggle goods into the country, the fact is that the new wave of sanctions will also lead to a hike in smuggling.

Today Iran is faced with three factors that have paved the way for a growth in smuggling: multitiered exchange rates, unrealistically low fuel pricing and emerging sanctions. The Rouhani administration may not control the fate of US sanctions, but it is responsible for the misguided policies that have led to the other two phenomena in the country’s economy. During his Oct. 28 speech to the Iranian parliament, Rouhani said the government had a responsibility to resolve the economic bottlenecks and should not hide behind sanctions. It remains to be seen whether the administration will address the issue of smuggling and at least correct the misguided domestic policies or whether it will continue its short-term firefighting exercises such as fuel rationing and a policing approach to foreign exchange markets.