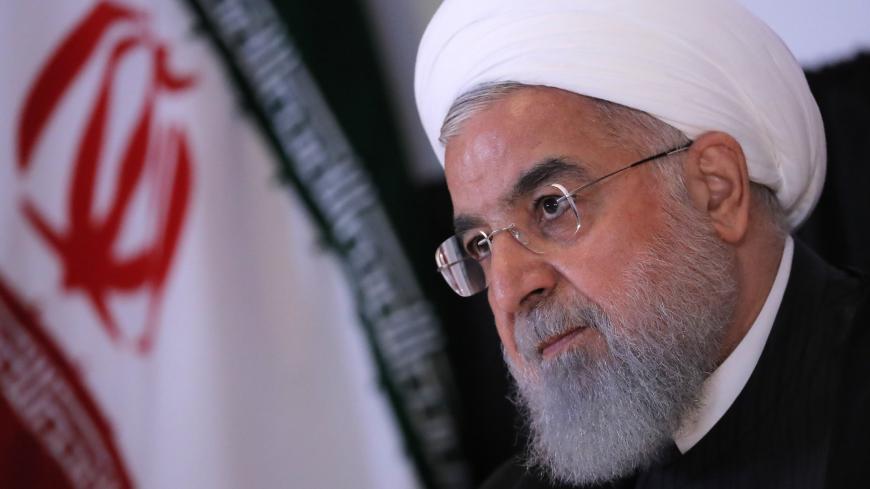 Iran's President Hassan Rouhani listens during a news conference on the sidelines of the 73rd session of the United Nations General Assembly at the UN headquarters in New York, US, Sept. 26, 2018. - REUTERS/Brendan Mcdermid

"I don’t believe any country would dare commit such a crime without the support of the US," said Iranian President Hassan Rouhani at an Oct. 24 cabinet meeting. Rouhani condemned the murder of dissident Saudi journalist Jamal Khashoggi in the Saudi Consulate in Istanbul as a "heinous crime" and advised the Turkish government to conduct a "precise and impartial" investigation into Saudi Arabia's role in it. He blamed the same US support for the Saudis' "savage bombardment" of the Yemeni people.

Turkey is playing a central role in the Khashoggi revelations that have rocked the world media — including Iranian outlets. Yet an Oct. 23 speech by Turkey’s President Recep Tayyip Erdogan disappointed several Iranian hard-line papers and even some moderates, as he did not spill the secrets they had anticipated. "US, Turkey, Saudi colluding to close the Khashoggi murder case," opined Jomhouri-e Islami, a moderate paper with an agenda aligned with that of the Rouhani administration. The article read, "Erdogan made no mention of [Saudi Crown Prince] Mohammed bin Salman … and addressed the parliament only after the CIA chief landed in Turkey." The article alleged that bin Salman managed to buy Trump and Erdogan's silence.

Hard-line Kayhan took a similar tone: "Erdogan running with the hare and hunting with the hounds," read its sarcastic headline, suggesting that the Turkish president is exploiting the killing. "Everyone was expecting his speech to be a coup de grace on bin Salman, but he only continued his game to grab more concessions from the Saudis." Kayhan reported the intelligence Erdogan presented in the speech was already outdated and that with his praise for the Saudi king, "he kept the door open for a deal" on Khashoggi's murder. Javan, another hard-line paper, expressed equal dismay at Erdogan for his failure to offer the "bare truth" he had promised.

Still, there were some who applauded the Turkish president's approach. Describing the case as a "Jamal Gate" scandal for Saudi Arabia, the Reformist daily Ghanoon argued that Erdogan emerged "triumphant" by "smartly" rejecting Saudi concessions, a view shared by many Iranians on social media. "In return for the closure of the Khashoggi file, the Saudis promised Erdogan financial aid and a lifting of the Qatari blockade, but he rejected it," one user tweeted, adding, "With his sophistication, Erdogan has managed to keep the news [of Khashoggi’s killing] as the world’s top headline." Posting a picture of the Saudi crown prince shaking hands with Khashoggi’s son, another user wrote, "You smother the man to death and then you force his son to meet you for your condolences. You must have a lot of nerve. Only Mohammad bin Salman can be that shameless!"

To many, the embarrassment the Khashoggi case has brought to the Saudi ruling family and the intensifying tensions around it were a one-in-a-million chance for Iran, but Tehran failed to exploit the golden opportunity. Pro-reform Etemad praised its "strategic silence," saying Iran does not need to react. "All it should do is sit back and watch as the gap widens in the alliance Trump had been building to intensify pressure on Tehran."