Intel: How Mnuchin’s trip to Saudi Arabia allows Prince Mohammed to save face 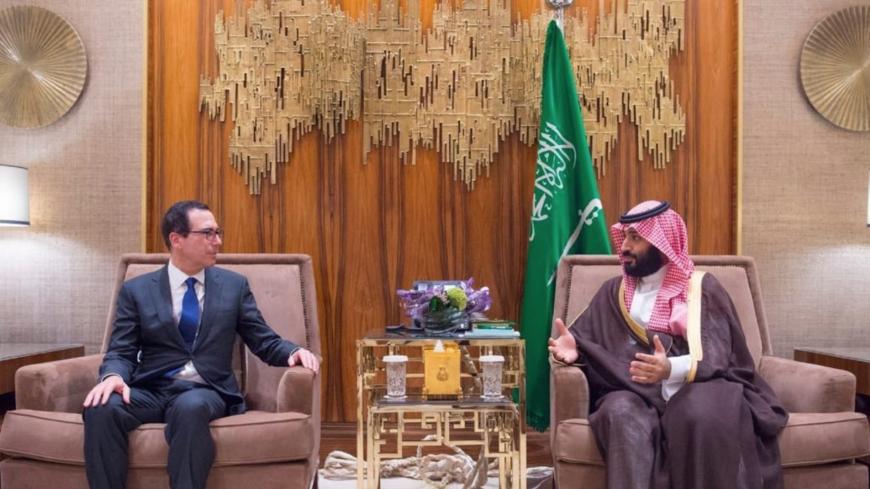 The international outcry against Riyadh for murdering journalist Jamal Khashoggi may be heating up, but that didn’t stop Treasury Secretary Steve Mnuchin from meeting with Crown Prince Mohammed bin Salman in Riyadh today. According to a Saudi statement, the pair “stressed the importance of the Saudi-US strategic partnership and the future role of this partnership in accordance with the kingdom’s Vision 2030.” Bilateral relations “were also reviewed on both the trade and investment sides and the opportunities for their development.”

Why it matters: Mnuchin had already planned the visit as part of a weeklong trip to the region before Khashoggi’s death. He had been set to address Tuesday's investment conference, billed as “Davos in the desert,” as part of Prince Mohammed’s Vision 2030 plan to modernize and diversify the Saudi economy. But after a deluge of withdrawals from high-profile investors, media outlets and other international leaders, Mnuchin followed suit. Still, the US Treasury secretary kept the rest of his itinerary intact, pointing to the need to attend a terrorism financing summit this week. Despite reports indicating that Prince Mohammed personally targeted Khashoggi, President Donald Trump has been trying to preserve the US-Saudi alliance as he relies on Riyadh for his hard-line Iran strategy and his still unannounced Israeli-Palestinian peace plan.

Vision 2030: Mnuchin's visit and its focus on Vision 2030 shows the Trump administration still backs the controversial crown prince, who denies involvement in Khashoggi’s murder. The Saudis have fired two high-profile associates of the crown prince, but it remains to be seen if they are among the 18 individuals Riyadh arrested for the murder and what sort of punishment they will face. The US administration has previously propped up Prince Mohammed’s economic reform agenda, with Commerce Secretary Wilbur Ross saying it could generate more wealth for the kingdom than even the discovery of oil.

What’s next: Turkey continues to investigate the Khashoggi murder and has continually spoon-fed details to pro-government media. President Recep Tayyip Erdogan is set to address the investigation in remarks before parliament tomorrow, the same day the Saudis host their investment conference.

Know more: Read Barbara Slavin’s latest article to find out how Khashoggi’s murder undercuts Trump’s campaign against Iran. And click here for all the latest updates on the Khashoggi investigation.