Intel: Why Iran is blaming the US for Khashoggi’s death after three weeks of silence 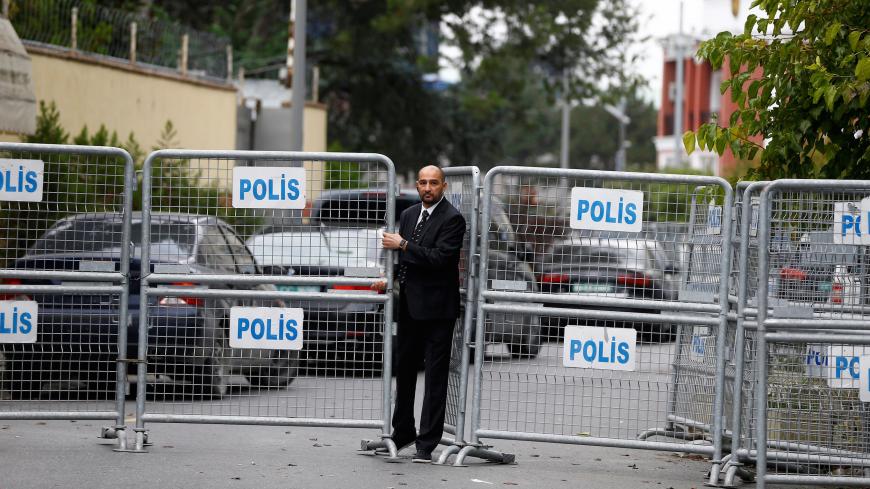 A member of security staff is seen next to the barriers at the gate of Saudi Arabia's consulate in Istanbul, Turkey, Oct. 20, 2018.

For the first time since the killing of Saudi journalist Jamal Khashoggi hit world headlines, Iran's president came out in condemnation today. "No one would have expected that such a coordinated murder could take place in our times," Hassan Rouhani told a Cabinet meeting in Tehran.

Rouhani demanded that Turkey shed light on all the "angles" of the "crime.” More significantly, the Iranian president blamed Washington for standing behind Riyadh. "I don't think that any country would dare do such a thing without US backing," he said in comments broadcast on state television.

Why it matters: The comments came only one day after Rouhani renewed defiance against the imminent reimposition of key US sanctions targeting Iran's oil and banking sectors. "The US is planning to turn Nov. 4 into a bitter memory for Iranians,” he said. “But it will be definitely defeated by the resistant nation and the brave supreme leader."

That could also explain his belated response to Khashoggi’s murder. By implicating Washington and highlighting US "support" for the Saudis, Rouhani was seen trying to mitigate the impacts of the fresh sanctions. The president appears to be pushing to rally world governments around Iran and tell them the sanctions are coming from the very state that supported the murder of a journalist inside a consulate.

What’s next: Despite the unprecedented global coverage and the world outrage against Riyadh, Iranian officials have been largely muted on the Khashoggi mystery. Iran will most likely stick to the same low-key approach toward Turkey and not move beyond diplomatic calls on Ankara to dig in and reveal the truth. But it will probably continue to name the United States, blaming it no less than Saudi Arabia. At a time when Iran’s two arch foes are going the extra mile to crush Tehran, the Khashoggi case is seen as the proverbial stone Iranian officials can just pick up to kill them both with.

Know more: Al-Monitor has extensive coverage of the rapidly unfolding developments surrounding the Khashoggi case. Barbara Slavin's piece sheds more light on how the US pressure campaign against Iran is undermined by the journalist's murder. And for a closer focus on how Turkey is handling the situation through its phased leaking of intelligence, read Al-Monitor columnist Amberin Zaman's pieces here and here.