Intel: Why Turkey is leaking Khashoggi details to the media 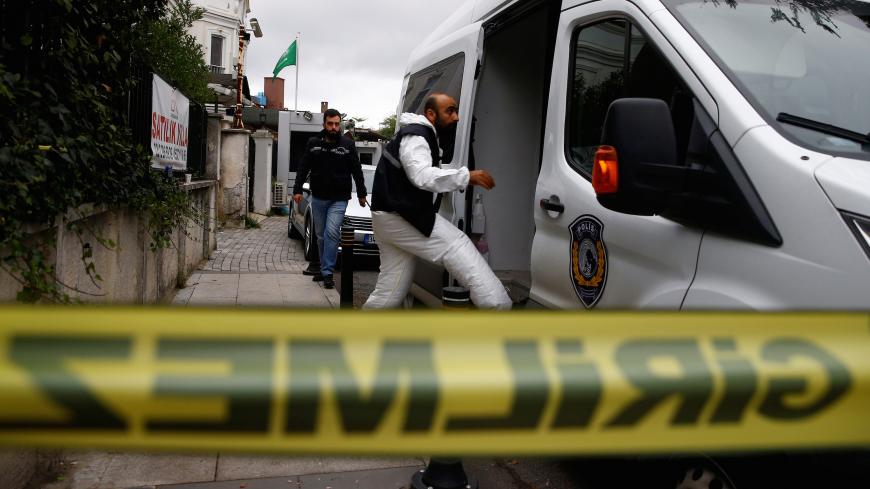 Officially, Turkey is working with Saudi Arabia to get to the bottom of journalist Jamal Khashoggi's disappearance after entering the Saudi Consulate in Istanbul two weeks ago. Behind the scenes, however, Turkish intelligence has been leaking a steady stream of lurid allegations of his alleged demise to foreign and domestic media.

“Turkey acknowledges this is an international issue and should be dealt with on the world scene,” a senior bureaucrat acknowledged to Al-Monitor. “We want to keep the attention alive. We do not want to frame this as a bilateral issue with the Saudis alone.”

Why it matters: Ankara believes it has been successful in convincing global audiences that Khashoggi was murdered by officials closely linked to Crown Prince Mohammed bin Salman. At the same time, President Recep Tayyip Erdogan has yet to make an official statement about the case.

The dual game of leaks and official silence is widely seen as a bid to both embarrass and extract concessions from a geostrategic rival. Ankara and Riyadh are at odds over a wide range of issues, from Turkey's support for Qatar and the Muslim Brotherhood to Ankara's staunch opposition of Saudi-backed Kurdish rebels in Syria. What exactly the Turks hope to gain from their negotiations with the Saudis remains shrouded in mystery.

Bureaucratic CYA: Turkish officials deny any overarching desire to hurt Saudi Arabia. Rather, they say, their aim is to keep the spotlight on Khashoggi even as they continue their quest for answers.

Turkey has been criticized for its piecemeal leak strategy, which marks a change of style in how the government communicates with the media. Sources in Ankara confirmed with Al-Monitor that the change can be attributed to the new communications management under the presidency. The new bureau has managed to streamline the flow of information with a high degree of consistency. Still, they acknowledge some inconsistent leaks after information was shared through internal channels with the security and judiciary agencies.

What's next: Expect more leaks as the investigation continues. There are now allegations that Turkish intelligence has more than one recording of Khashoggi’s final moments. Despite strong interest from the public and the media, however, the government may not cave to pressure to release its evidence.

Know more: Al-Monitor is closely monitoring the impact of Khashoggi’s disappearance in Washington and across the region. Read our full coverage here.