US stands alone on Iran at Security Council 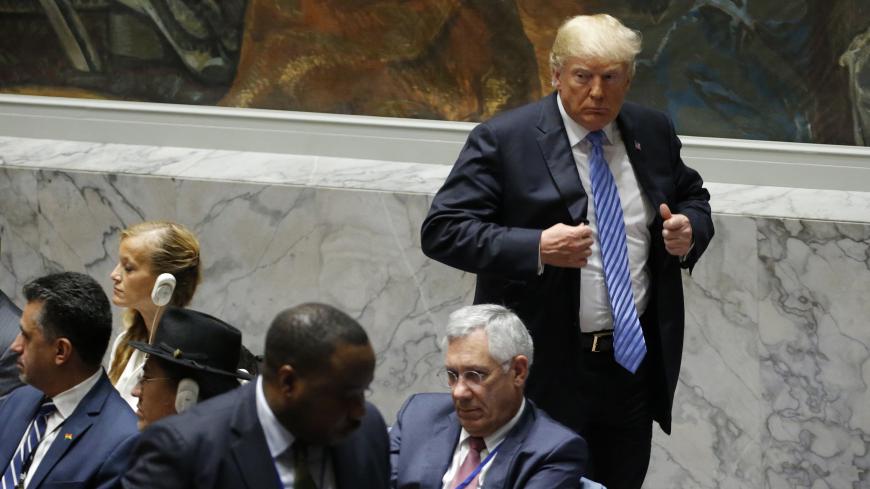 NEW YORK — One day after his boast of unprecedented US greatness drew laughter at the United Nations, President Donald Trump's isolation on the global stage was on full display today at the Security Council.

The US leader showed no sign of contriteness as one world leader after another ripped into his administration's decision to exit the 2015 nuclear deal as he chaired a counter-proliferation briefing. Instead, Trump put foreign officials on notice that they would have to follow America's lead, not the other way around.

He went on to urge other countries to abandon their efforts to save the deal by continuing to do business with Iran.

“Any individual or entity who fails to comply with these sanctions will face severe consequences,” Trump warned. “I ask all members of the Security Council to work with the United States to ensure the Iranian regime changes its behavior and never acquires a nuclear bomb.”

The other 14 members urged a rethink.

Russian Foreign Minister Sergey Lavrov said Trump's withdrawal has created a "serious threat" to the global nonproliferation regime. He added that Moscow was “actively working” with Iran, China and the European Union to salvage the deal.

Chinese Foreign Minister Wang Yi called the Iran nuclear deal a “hard-won achievement of multilateralism” that has bolstered peace in the Middle East.

Bolivian President Evo Morales presented a litany of US interventions abroad to defend the deal.

"Now that Iran has taken control of its own resources,” Morales said, “it is once again the victim of a US siege."

US allies also shared their concerns.

French President Emmanuel Macron opened the push-back by saying France disagreed with Trump on the Iran deal while sharing his desire for longer-term nuclear limits, restrictions on Iran's ballistic missile program and resistance to Tehran's role in regional instability.

British Prime Minister Theresa May called the deal “an important step forward” that “remains the best means of preventing Iran from developing a nuclear weapon.”

President Andrzej Duda of Poland, a close US ally that's not a party to the deal, thanked the International Atomic Energy Agency (IAEA) for its work ensuring Iran's compliance with the agreement. The IAEA last month concluded that Iran is still living up to its commitments, the 12th time it has done so.

Even Kuwait's Deputy Prime Minister Sabah Al-Khalid Al-Sabah took note of the IAEA's conclusions that Iran is respecting the deal, even as he urged multilateral action against Tehran for its support of Yemen's Houthi rebels. Sabah also called for Israel to join the Treaty on the Nonproliferation of Nuclear Weapons, with its nuclear facilities subject to scrutiny.

Today's Security Council meeting comes two days after EU foreign policy chief Federica Mogherini unveiled a new “special purpose vehicle” to allow European businesses to continue doing business with Iran without risking getting shut out of the US financial system. White House national security adviser John Bolton scoffed at the last-ditch effort to save the deal during an appearance before the hawkish United Against Nuclear Iran in New York, saying, “The European Union is strong on rhetoric and weak on follow-through.”