Intel: Nuclear deal parties lay out plan to stand up to US 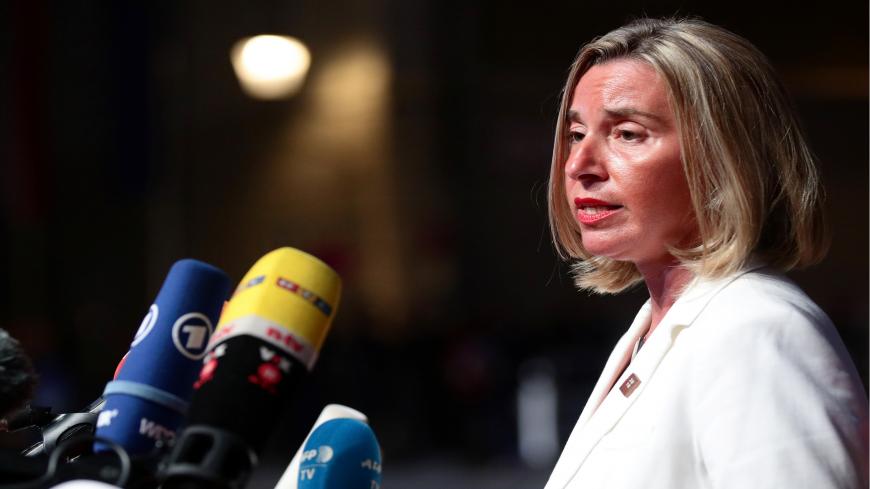 European Union High Representative for Foreign Affairs Federica Mogherini talks to the media as she arrives for the informal meeting of European Union leaders ahead of the EU summit, in Salzburg, Austria, Sept. 19, 2018. - REUTERS/Lisi Niesner

The remaining parties to the nuclear deal with Iran agreed Monday night to create a financial mechanism to keep the pact alive despite the US withdrawal.

“Mindful of the urgency and the need for tangible results,” Mogherini said, “participants welcomed practical proposals to maintain and develop payment channels, notably the initiative to establish a special purpose vehicle to facilitate payments related to Iran's exports, including oil, and imports, which will assist and reassure economic operators pursuing legitimate business with Iran.”

Mogherini said the decision to establish the mechanism “has been taken” and that technical experts from EU member states would now be convening to turn it into reality.

“In practical terms, this will mean that EU member states will set up a legal entity to facilitate legitimate financial transactions with Iran and this will allow European companies to continue to trade with Iran in accordance with European Union law,” she said. “And it will be open to other partners in the world.”

The parties also agreed to support continued modernization of Iran's Arak research reactor as well as support for projects in the area of civil-nuclear cooperation.

Why it matters: The 2015 Joint Comprehensive Plan of Action (JCPOA) promised Iran economic benefits in exchange for curtailing its nuclear program. Tehran has largely lived up to its commitments, but worries about being left out to dry by its other JCPOA partners whose businesses are far more concerned with losing access to the US financial system than they are with entering the Iranian market. As Mogherini put it, the more actions the JCPOA parties take to live up to their end of the bargain, the more reasons Iran has to remain in the deal.

Time to take a side: The Trump administration has made no secret of its demand that the international community line up behind its hawkish policy on Iran. Trump and Iranian President Hassan Rouhani are expected to trade barbs in their respective speeches to the UN General Assembly on Tuesday. The US president is also expected to have “well-deserved strong words for the Iranian regime” when he hosts Wednesday's Security Council meeting on nonproliferation, Secretary of State Mike Pompeo said today. Pompeo went on to call on “every country to join our pressure campaign in order to thwart Iran's global torrent of destructive activity.”

What's next: Mogherini and her colleagues are putting on a brave face, but the writing may already be on the wall. The US is resuming its toughest sanctions to date, on Iran's oil industry, in November and the administration appears ready to punish financial services companies that do business with Tehran.

Know more: Check out Al-Monitor's coverage of all the last-ditch attempts to save the deal along with our complete coverage from the UN General Assembly right here.