Rouhani says US, not Iran isolated at UN

Iranian President Hassan Rouhani suggested it was the United States, not Iran that was isolated at the UN over President Donald Trump’s decision to leave the Iran nuclear deal. 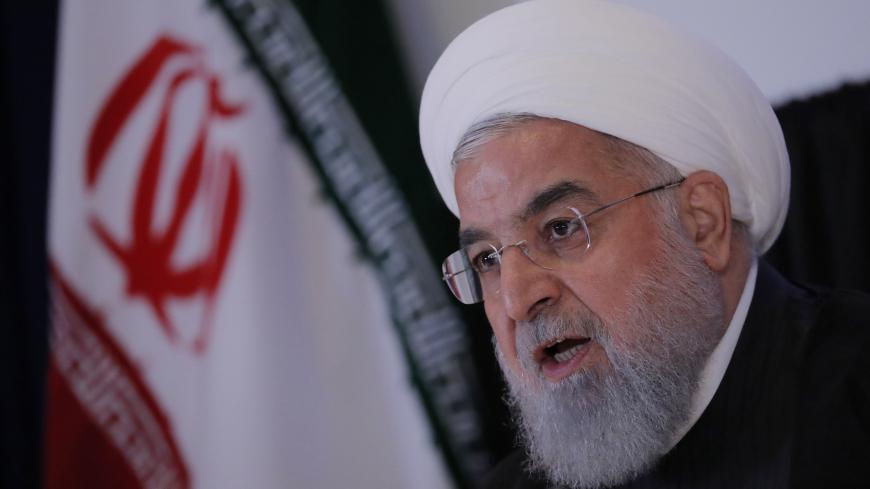 Iranian President Hassan Rouhani speaks at a news conference on the sidelines of the 73rd session of the United Nations General Assembly at UN headquarters in New York, US, Sept. 26, 2018. - REUTERS/Brendan Mcdermid

NEW YORK — Iranian President Hassan Rouhani, speaking at a press conference here today, portrayed the Donald Trump administration as inexperienced and the United States as isolated at the United Nations Security Council over its decision to withdraw from the 2015 Iran nuclear deal. He suggested Washington may eventually decide to come back to the deal.

“We are not isolated,” Rouhani, speaking in Persian with English translation to Iranian and foreign journalists at a hotel conference room across from the UN, said today. “As a matter of fact, America is isolated.”

“On the Security Council, everyone expressed support for the JCPOA, and said the path chosen by the US is the wrong path,” Rouhani said, referring to the Joint Comprehensive Plan of Action, the formal name of the 2015 Iran nuclear deal. “The Americans are alone and isolated, and faced with many challenges from its own presence and security.”

“The USA made a mistake,” Rouhani said. “Either they will come back [to the deal], or they will continue down the path of this mistake. This cannot continue.”

Trump, presiding over a UN Security Council meeting on nonproliferation earlier today, reiterated his rationale for withdrawing from the nuclear deal, but found no support on the decision from the 14 other members.

“This horrible, one-sided deal allowed Iran to continue its path toward a bomb and gave the regime a cash lifeline when they needed it the most,” Trump told the Security Council. “I ask all members of the Security Council to work with the United States to ensure the Iranian regime changes its behavior and never acquires a nuclear bomb.”

But Washington’s allies on the Security Council spoke up for the JCPOA, and said successful nonproliferation requires the international community to be united.

The JCPOA “remains the best means of preventing Iran developing a nuclear weapon, and we are committed to preserving the JCPOA as long as Iran continues to abide by its obligations in full,” British Prime Minister Theresa May told the UN Security Council meeting.

Trump himself shifted gears at the meeting, from bashing the Iran nuclear deal and destabilizing regional behavior to praising Iran, Syria and Russia for agreeing this month to halt an anticipated offensive on the northwest Syrian province of Idlib — and seemed to credit himself for their restraint.

“With all of this said, I want to thank Iran, Russia and Syria for — at my very strong urging and request — substantially slowing down their attack on Idlib province and the 3 million people who live there in order to get 35,000 targeted terrorists,” Trump said. “Get the terrorists, but I hope the restraint continues. The world is watching.”

Trump’s occasionally more mild language on Iran is at odds with that of his top advisers. Secretary of State Mike Pompeo’s department this week announced publication of a book portraying the Islamic Republic of Iran as an “outlaw regime.”

Likewise, national security adviser John Bolton, speaking at the United Against Nuclear Iran conference Tuesday, threatened that the United States would use all tools at its disposal to go after Qasem Soleimani, the leader of the Quds Force of Iran’s Islamic Revolutionary Guard Corps, and said US troops would not leave Syria until Iranian soldiers have all returned to Iran.

Rouhani suggested that Iran was unfazed by the bombastic rhetoric from top Trump advisers, but said Iran has no wish to go war with the United States.

“Well, the language wasn’t really new,” Rouhani said in response to a question about the State Department portraying Iran as an "outlaw regime." "I am not sure why you find it so unique."

The United States should “stop bullying, and keep the promises it signed on to,” he added.

Rouhani, asked by Al-Monitor about Bolton's threat that the United States would use all means at its disposal to target Soleimani, portrayed Bolton, whom he did not name, as a well-known hothead. “All people are familiar with the person you are speaking about and his past, everyone is clear.”

Asked about Pompeo’s contention that the United States will hold Iran responsible for any actions by Iraqi Shiite groups that harm US personnel or diplomatic facilities in Iraq, Rouhani did not concede that Iran directs or has control over those groups, and suggested that the US presence in Iraq may not be welcome on the ground.

“We are very keen on conducting a poll, how many Iraqis support the US presence there,” Rouhani said. “America must think again about her presence in the region.”

“We ask the US to respect the laws and national sovereignty of nations,” he said, using the "sovereignty" theme that was the centerpiece of Trump’s address to the UN General Assembly Tuesday.