The US administration said it hoped that renewed economic sanctions on Iran going into effect Tuesday will spur Iranian protests and pressure the regime to accept Donald Trump’s offer for talks. 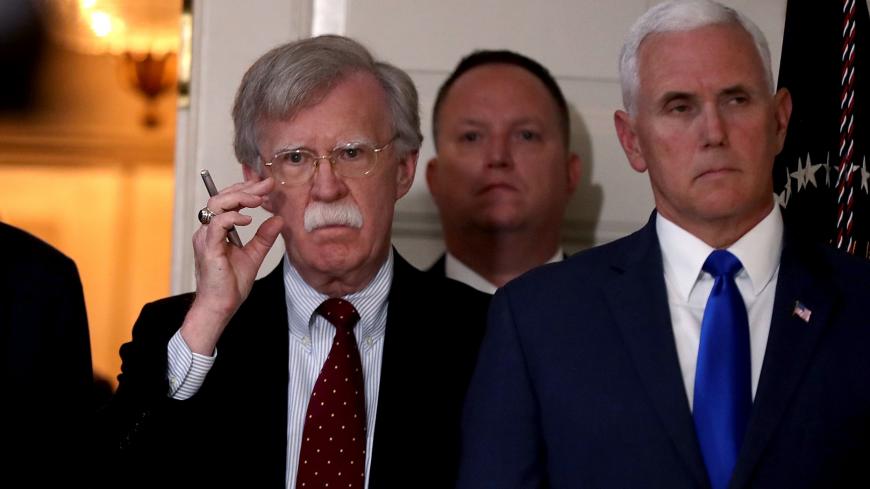 WASHINGTON — Senior Donald Trump administration officials said today they hope that renewed US economic sanctions on Iran that go into effect Tuesday will fuel Iranian protests and ultimately pressure the Iranian regime to take up Trump on his offer for talks for a broader deal.

“If Iran were really serious they’d come to the table,” Trump national security adviser John Bolton told Fox News today. “We’ll find out whether they are or not.”

“They could take up the president’s offer to negotiate with them, to give up their ballistic missile and nuclear weapons programs fully and really verifiably,” Bolton said.

US officials from the White House, the State Department and the Treasury Department, speaking not for attribution on a press call today, said they believed that recent protests seen in Iran and the recent sharp drop in the value of the Iranian currency, the rial, show the Iranian people are frustrated with the Iranian government’s decisions about how to manage the economy. In particular, US officials said they support Iranian protesters calling on the Iranian regime to stop spending Iranian money and resources on supporting Syrian President Bashar al-Assad, Shiite militias and proxy groups that the United States says are destabilizing the region.

“What we’re noticing is that so many of the things that the protesters are demanding are very similar to the things that the United States and other nations in the world are demanding,” a senior administration official, speaking not for attribution, said on the call. “And we have been consistent saying that if Iran will start behaving like a normal country, there are a number of benefits that will follow from that.”

“But for as long as Iran continues to export revolution around the Middle East and to destabilize the region … I think you’re going to see the Iranian people continually frustrated, and we support their claims,” the official continued. “So we would like to see a change in the regime’s behavior, and I think the Iranian people are looking for the same thing.”

The Trump administration officials said they were glad to see signs of Iranian economic distress and unrest after Trump’s withdrawal from the Iran nuclear deal in May, contrary to predictions of some experts that unilateral US economic sanctions would not be very effective.

“Now, at that time we were warned by experts from the EU, even from my alma mater of the University of Pennsylvania — very sad — that the threat of unilateral sanctions from the United States would not be an effective tool,” a second senior administration official said on the press call. “But three months out, we have a very different picture in front of us. The rial is tanking, unemployment in Iran is rising, and there are widespread protests over social issues and labor unrest,” she said, expressing glee.

The five other world powers that negotiated the 2015 nuclear deal with Iran — the UK, France, Germany, Russia and China — continue to support it, and European foreign ministers expressed deep regret today as the first of two phases of renewed US economic sanctions went into effect. A second phase of more severe US sanctions on Iran’s energy and banking sectors is set to go into effect in November.

“We deeply regret the re-imposition of sanctions by the US, due to the latter’s withdrawal from the Joint Comprehensive Plan of Action (JCPOA),” European Union High Representative Federica Mogherini, French Foreign Minister Jean-Yves Le Drian, German Foreign Minister Heiko Maas and UK Foreign Secretary Jeremy Hunt said in a joint statement today. “The JCPOA is working and delivering on its goal.”

“The lifting of nuclear-related sanctions is an essential part of the deal,” they said, vowing that they would intensify efforts to try to enable Iran to continue exporting oil and gas and conduct banking transactions in spite of renewed US sanctions on those sectors set to go into effect in November.

But despite the international resistance, the Trump administration officials expressed determination to impose deepening economic pressure on the Iranian regime in the months to come until it changes course.

“This administration intends to fully enforce our sanctions as they come back into effect in order to impose economic pressure on the Iranian regime to stop its destabilizing activity, and ultimately chart a new path that will lead to prosperity for the Iranian people,” a third senior administration official said on the call.

Iranian officials, including those deeply involved in negotiations with the United States for the nuclear deal from 2013-2015, said they did not see the right conditions for new talks with the Trump administration at this point. And they expressed skepticism about Trump’s July 30 offer to talk with Iranian officials “anytime,” with “no preconditions,” suggesting it might be a tactic to reduce international opposition to the US pressure campaign.

"If we want negotiations with results, we can't have one side continuously stating it's the stronger side and the other side is weaker,” Majid Takht-Ravanchi, a top Iranian nuclear negotiator who serves as an adviser to Rouhani, said in an interview with Iran’s Tasnim news agency. “It shouldn't be such that the other side thinks it's being dictated to."

"We don't see any of these conditions,” Takht-Ravanchi said. “We explicitly say that negotiations in the current environment would be useless, in some ways even harmful. So in regard to Trump's recent comments, not only do we not take them seriously, but we see it as a tactic."

"We negotiated on every word on JCPOA, and Trump with one signature voided it,” Iranian Foreign Minister Mohammad Javad Zarif said in a press conference with Iranian reporters. “And now he comes and talks of negotiations? This is just a propaganda play."

Iranian American analyst Amir Handjani also questioned whether the Trump administration would actually be willing to make a new deal with the Iranian regime it is trying to destabilize.

“There is an inherent contradiction in saying we want to sit down with the Iranians and cut a better deal with them, while at the same time encouraging more unrest and havoc inside Iran,” Handjani, a senior fellow at the Atlantic Council and a member of the board of directors of RAK Petroleum, told Al-Monitor by email.

"Either it's poorly thought out diplomatic strategy at best or a disingenuous attempt for rapprochement with Tehran at worst,” Handjani said. “It's doubtful that Rouhani will sit down with Trump unless the administration clarifies its position and then backs its rhetoric with concrete, tangible steps."

He said, “The Iranians have their backs against the wall. They can ill afford to have a sit-down with Trump and walk away with nothing in return. From their perspective, they have held up their end of the nuclear deal. They will point to that and say to Trump 'we can deliver what we sign up to, can you Mr. Trump?’”