Iranian President Hassan Rouhani will have problems if Iranian expectations regarding the timing of lifting sanctions are not managed. 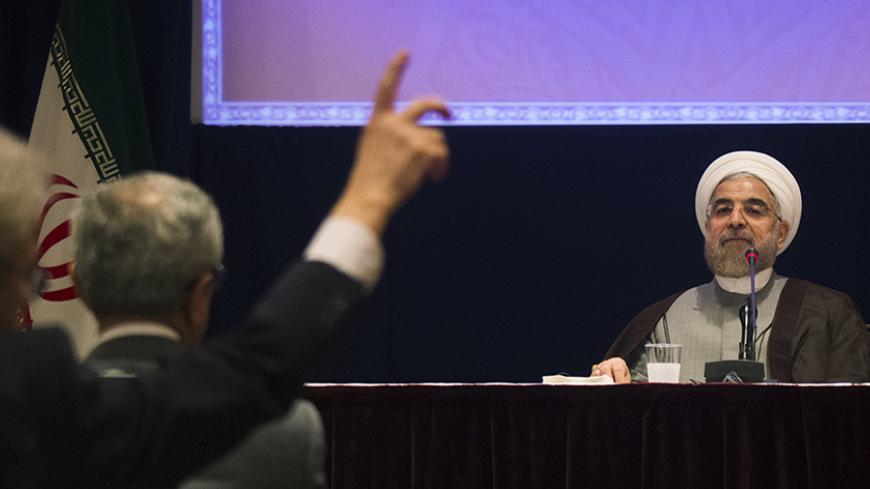 Iran's President Hassan Rouhani takes a question during a news conference on the sidelines of the 69th United Nations General Assembly at UN headquarters in New York, Sept. 26, 2014. - REUTERS/Adrees Latif

The current Iranian administration has made remarkable progress in its pursuit of a comprehensive nuclear agreement with the world powers. However, it has done far more poorly in its managing of domestic expectations from the immediate impact of a potential deal. Ultimately, this may have a grave effect on its ability to bank on an accord to pursue its broader agenda of political reform and liberalization. Failure to do the latter, in turn, has the potential to undermine popular support.

As Al-Monitor first reported June 26, based on interviews with multiple Iranian sources, a potential final nuclear deal between Iran and the five permanent members of the UN Security Council plus Germany (P5+1) will consist of three phases: adoption, operation and implementation. Adoption refers to an accord in Vienna on the main agreement text and annexes for respective domestic review. Operation will see each side completing its internal review processes and subsequently beginning agreed-upon measures to commence implementation of the deal. When these measures have been taken, implementation will begin as an automatic mechanism links the finalization of Iranian measures with the lifting of Western economic, banking and financial sanctions.

This phasing of a final nuclear deal was not explained to the Iranian public, on the record, until an Iranian official did so July 5 — two days ahead of the then-July 7 deadline of the November 2013 Joint Plan of Action. Iran and the P5+1 have since extended the deadline to July 10.

What is clear from the staging of the Joint Comprehensive Plan of Action (JCPOA) is that it will take at least until the end of this year for Iran to begin experiencing a respite from the most damaging sanctions. What is also clear is that the expectations of most Iranians that the outcome of the talks will have a immediate and significant impact on their lives will not be met.

According to a recent survey conducted by Toronto-based IranPoll in conjunction with the University of Maryland, Iranians overwhelmingly support a deal along the lines of the parameters agreed to in Lausanne in April. However, worryingly, they perceive the lifting of sanctions to include all US sanctions, and expect that the lifting of these restrictions will “result in tangible improvements in their lives in less than a year after a deal is reached.” IranPoll founder Amir Farmanesh further emphasizes, “There exists a very strong correlation between these assumptions/expectations and support for the deal.”

Enter the UN Security Council sanctions on Iran. For years, President Hassan Rouhani, who led nuclear negotiations with Europe from 2003 to 2005, has defended his record of seeking to prevent the transfer of Iran’s nuclear file from the International Atomic Energy Agency’s Board of Governors to the UN Security Council. In this vein, the argument is that the UN sanctions, while inferior to unilateral Western sanctions in terms of damage caused to Iran’s economy, are crucial as they give Western sanctions the legitimacy that has allowed their implementation.

Thus, the timing and nature of the lifting of the UN Security Council sanctions hold great significance for the Iranian administration’s ability to exert influence at home.

Delayed sanctions relief is not likely to turn a deal with the P5+1 into a liability for the moderate forces in control of the executive branch. However, if they do not manage expectations at home, it will be difficult for Iranian moderates to capitalize on a nuclear deal and extend their influence to the legislative branch in the February 2016 parliamentary elections. Therefore, Iranian negotiators would be wise to seek the lifting of UN Security Council sanctions at the earliest possible date, to be able to argue that the backbone of the international sanctions regime has been broken and that Iran’s nuclear file is firmly en route to normalization.

Indeed, Iranian negotiators appear to seek precisely that. On June 7, Iranian Reformist daily Sharq quoted Deputy Foreign Minister Majid Takht-Ravanchi as saying, “From our point of view, … a short while after an agreement, the UN Security Council must adopt [a new resolution], meaning there will be a resolution and previous resolutions will cease being in effect, and [the agreement] will be endorsed.” Takht-Ravanchi added that “it is not acceptable” for this process to be delayed.

Beyond the domestic dynamics of UN Security Council sanctions, there is also the matter of the UN arms embargo on Iran. At a July 6 briefing attended by Al-Monitor, a senior Iranian official told reporters, “As far as Iran is concerned, we believe that in the JCPOA there should not be any place for the arms embargo. … There is no evidence whatsoever that the arms embargo has any relation to the nuclear issue, so that is the natural consequence of the way that Iran believes the outcome of the negotiations should be: without any inclusion of the arms embargo for Iran.”

There appear to be internal P5+1 differences over this matter. In his interview with Sharq, Takht-Ravanchi stated that Iran’s position on UN Security Council sanctions is shared by “the majority of those we are currently negotiating with.” He added, “The Americans themselves have not yet in a definitive manner offered their position.” However, Iran has refrained from publicly seizing on these differences. In the words of the official briefing reporters July 6, “You know it is no secret that we have good relations with both China and Russia in comparison to our relations with the other four countries, but that does not mean that we have been trying to make a division within the P5+1. … We know that we have to work with all of them; otherwise, there will not be a resolution of the issue. … We are working within an international setting.”

While the arms embargo is subject to great power and regional dynamics, including the Russian-US competition, neither Tehran nor Moscow have an interest in painting themselves into a corner. Indeed, on July 9, Russian Foreign Minister Sergey Lavrov said, “We are calling for lifting the embargo as soon as possible and we will support the choices that Iran’s negotiators make.”

In sum, the choices that Iranian Foreign Minister Mohammad Javad Zarif makes must balance crucial domestic calculations with regional power dynamics. If not — deal or no deal — the Iranian administration may soon be faced with dire prospects both at home and abroad.