After a lack of response from the UN, Trump officials take anti-Iran stance to private forum. 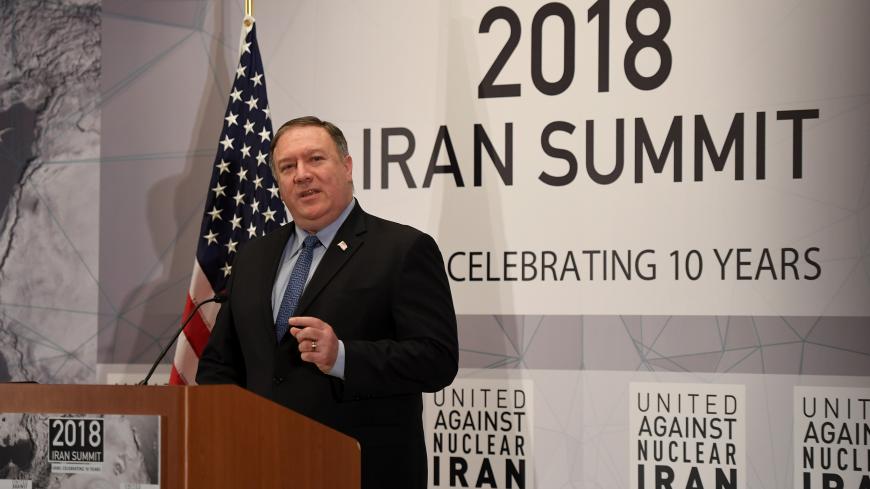 US Secretary of State Mike Pompeo speaks during the United Against Nuclear Iran Summit on the sidelines of the United Nations General Assembly meeting in New York City, Sept. 25, 2018. - REUTERS/Darren Ornitz

NEW YORK — While President Donald Trump’s decision to withdraw from the 2015 Iran nuclear deal is widely unpopular at the United Nations, which he addressed today, Trump’s top diplomat and national security adviser both got an enthusiastic reception from the private United Against Nuclear Iran (UANI) conference here for the administration’s exit from the deal and focus on maximizing economic pain on Iran.

“The Iran deal was the worst diplomatic debacle in American history,” national security adviser John Bolton told the UANI conference, held at a midtown New York hotel a few blocks from the UN, where the 73rd UN General Assembly high-level week is underway.

“The days of impunity for Tehran and its enablers are over. … Let my message today be clear: We are watching, and we will come after you,” Bolton said in conclusion today, to applause.

Secretary of State Mike Pompeo got a standing ovation when UANI board chair and former Sen. Joseph Lieberman introduced him as a longtime ally in opposition to the 2015 nuclear accord, negotiated by Iran and six world powers, including the past US administration of President Barack Obama.

Pompeo ridiculed what he called the “charm offensive” by Iranian officials at the annual gathering of the world body, and took issue with the reputation as relative moderates that Iranian President Hassan Rouhani and Foreign Minister Mohammad Javad Zarif hold in some quarters.

Pompeo gave a world tour of terrorism supported by Iran and its proxies going back to the 1990s, and cited Tehran’s continued refinement of its ballistic missile technology as a defiance of international laws and norms.

Rouhani, in his address to the UN General Assembly today, portrayed the United States as the violator of UN resolutions and international laws and as being relatively isolated in the UN Security Council as a result of the decision to leave the Joint Comprehensive Plan of Action (JCPOA).

“We are pleased that the international community did not acquiesce to the US government’s unilateral and illegal withdrawal from the JCPOA,” Rouhani said in his statement to the UN, according to a translation.

“The United Nations should not allow its decisions to fall victim to the domestic election and propaganda games of some of its members,” Rouhani said. “We appreciate the efforts of the international community, the European Union, Russia, and China in supporting the implementation of the JCPOA and consider the full realization of the commitments stipulated in it a precondition for the survival of this significant accomplishment of diplomacy.”

Pompeo paid lip service to the possibility of reaching a new agreement with Iran that satisfies the Trump administration’s broader concerns, but said Iran must change its behavior in a dozen areas he had previously set out.

Pompeo made no mention of Trump’s tweet this morning that said the president did not have plans to meet his Iranian counterpart this trip, but that maybe they could meet in the future, and that Trump believes Rouhani must be an “absolutely lovely man.”

Rouhani, for his part, said the precondition for Iran to consider negotiations with the Trump administration would be for the United States to return to the nuclear deal.

More ominously, Bolton also said that the United States would use all tools at its disposal to target Qasem Soleimani, the leader of the Quds Force of Iran’s Revolutionary Guard Corps.

The Trump administration says Iran has done nothing to stop allied Shiite militias from recently targeting US diplomatic facilities in Baghdad and Basra, Iraq, US special representative on Iran Brian Hook said. So the United States will focus on Soleimani and his military operations, Hook told journalists at a press briefing here tonight.

Bolton’s threat to Soleimani “speaks for itself,” Hook said.