Vladimir Putin and Recep Tayyip Erdogan said they will create a demilitarized zone to separate rebels from Syrian forces in what Turkey believes will prevent an attack on the opposition stronghold. 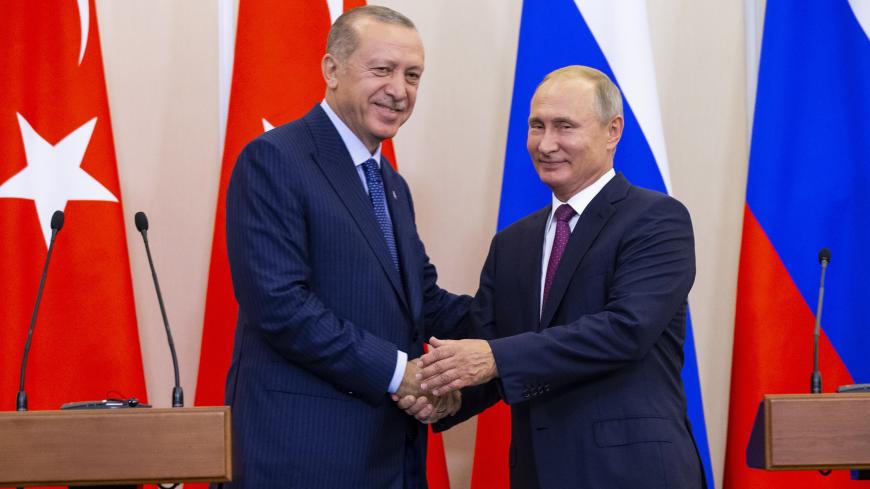 In a major diplomatic win for Ankara, the leaders of Russia and Turkey on Monday agreed to enforce a demilitarized zone in Syria’s Idlib province to forestall a bombardment of the opposition’s last stronghold.

Russian President Vladimir Putin and his Turkish counterpart Recep Tayyip Erdogan said the new buffer zone, measuring 15-20 kilometers (9-12 miles) wide, would separate territories controlled by rebels in Idlib from those held by Syrian government soldiers and would be patrolled by Turkish and Russian troops. The zone will go into effect in mid-October, Putin said.

Syria’s northwestern province of Idlib is the final rebel-held enclave in Syria, wracked by a seven-year war that has killed a half million people and displaced more than half of the country’s population.

“With this agreement, I believe we have prevented a major humanitarian crisis in Idlib,” Erdogan said at a press briefing after two hours of talks with Putin in the Russian city of Sochi.

“The opposition will continue to remain in the areas where they are present. We will ensure that radical groups do not engage in activity in the area. Russia will take measures to assure that the de-confliction zone will not be attacked,” he said.

Putin said Russia and Turkey had achieved “serious progress” in resolving the standoff over Idlib “and we can now move forward with coordinated actions."

He said, “We are hoping to move militants, including Jabhat al-Nusra, from the zone, and we are also hoping to remove from the area heavy military equipment.”

Putin also said Russia’s main worry is attacks on its military bases in Syria, which are sporadically hit by Turkey-backed rebels.

Russia had been preparing for an imminent attack on Idlib. But Defense Minister Sergei Shoigu said, after Putin’s meeting with Erdogan, that there would be no offensive and that an agreement would be reached with Assad’s government to stop airstrikes.

Assad sees Idlib as a hotbed for terrorism, equating the opposition to terrorists as he has throughout the war, and has signaled for nearly a year that his forces will move on the province. But he needs Russian air support and pro-Iranian militias to back him. Their support has allowed government forces to recapture more than 60% of Syrian territory compared with the 20% they controlled at the start of 2017.

Idlib is home to between 50,000 and 90,000 armed fighters, according to diplomatic sources. Of these, between 10-20% are thought to be hard-line militants, including Jabhat al-Nusra, with links to al-Qaeda and Islamic State.

Turkey, which supplies the province with aid and keeps hundreds of its soldiers in the province, has said a full-scale assault on Idlib would send as many as 2 million refugees across its southern border, as well as jihadis who could then move on to Europe. The UN said more than 30,000 people have already been displaced inside Syria by airstrikes on Idlib in recent weeks.

Washington, which has been largely absent from efforts to resolve the conflict, warned last week that Russia would be to blame if Syria caused mass civilian suffering in Idlib.

For its part, Russia has cultivated closer ties with Assad’s arch foe Erdogan, whose relationship with the United States has soured over a slew of disagreements.

Monday’s meeting was Putin and Erdogan’s second in 10 days as the Turkish leader presses Syria’s main backer to forgo an attack on Idlib.

He failed to persuade Russia and Iran to agree to a cease-fire at a summit in Tehran on Sept. 7. But airstrikes on the rebel enclave abated in recent days, and Erdogan credited Turkish efforts for the relative peace before he traveled to Sochi.

“The situation in Idlib has been quiet for two or three days. We seem to have achieved a result from the initiatives we undertook,” Erdogan told reporters on Sunday, Hurriyet newspaper reported.

Among those initiatives were reinforcements of tanks and weapons to Turkey’s 12 observation points in Idlib, the Syrian Observatory for Human Rights said.

“Turkey is providing alternatives so that they can isolate those who ideologically won’t be convinced,” a Western diplomat told Al-Monitor on condition he was not identified. “It’s not enough that they just change uniforms. They also have to prove it in their deeds, and that takes time as well. Turkey needs more time to do it.”

Erdogan called for a “comprehensive international counterterrorism operation” to rid Idlib of hard-liners in an editorial printed by The Wall Street Journal last week.

“Assad’s solution is a false one. Innocent people must not be sacrificed in the name of fighting terrorism. This will only create new hotbeds of terrorism and extremism,” Erdogan wrote.