As accounts emerge of White House aides' internal resistance to some of Trump's controversial policy decisions, the president boasts of his decision to move the US Embassy to Jerusalem, cut off Palestinian aid and pull the plug on the Iran nuclear deal. 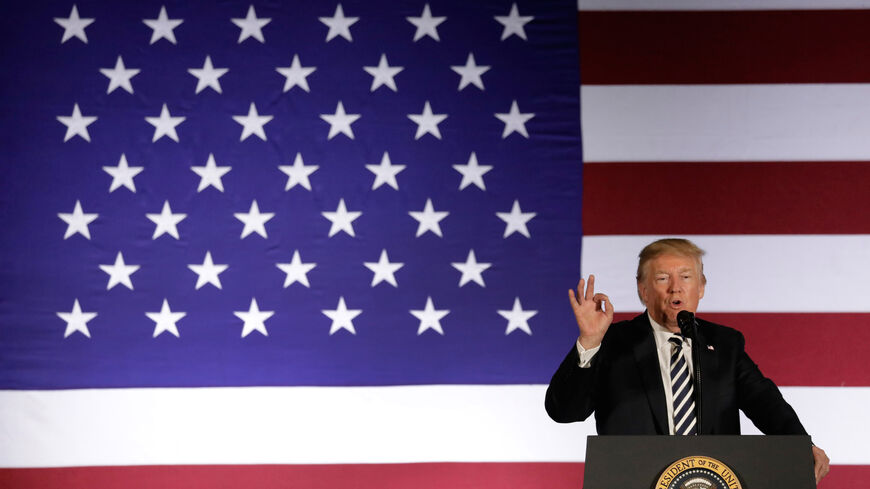 WASHINGTON — President Donald Trump, in a call with Jewish leaders and rabbis today ahead of the Jewish new year holiday, boasted about cutting off US aid to the Palestinians, pulling out of the Iran nuclear deal and taking the issue of Jerusalem off the table in Mideast peace talks, even as he and the White House fumed over two new devastating accounts of his presidency, largely sourced to his own current and former aides.

Trump said he wished he had pulled out of the 2015 Iran nuclear deal sooner and that his decision to do so last May and to reimpose sanctions on Iran, despite Iran’s compliance with the deal, had already reduced Iran’s “mojo.” Trump credited his presidency itself with rolling back Iran’s presence in the region, though it was hard to see what evidence there was for that assertion.

“Ultimately I decided I’m just doing it,” Trump said of his decision to withdraw the United States from the Joint Comprehensive Plan of Action last May. “And I did it. And it’s had a tremendously positive impact on, I think really, world security, because Iran is no longer the same country. From the day I did it, they’ve lost their mojo."

He continued, “The day before I took over as president, Iran — it was not a question of how big and how strong they were; it was a question of when will they take over the entire Middle East.”

“And if you look at them today, they’re not looking at the Mediterranean any longer. … And I think Israel feels a lot safer than they’ve felt in many, many years,” Trump said. “Iran is fighting for their own survival. They’ve got demonstrations in every city.”

Trump’s praise for his perceived accomplishments on the call with Jewish leaders came after the White House has felt increasingly besieged by insider accounts that describe the Trump White House as “Crazytown,” according to one.

“We’re in Crazytown,” Woodward cites White House Chief of Staff John Kelly as saying, according to a Washington Post report. Kelly issued a denial via the White House on Tuesday that he called Trump an idiot. “The idea I ever called the President an idiot is not true. … This is another pathetic attempt to smear people close to President Trump and distract from the administration’s many successes."

“Many of the senior officials in his own administration are working diligently from within to frustrate parts of his agenda and his worst inclinations,” the unnamed senior Trump administration official wrote in a New York Times op-ed Wednesday, which sent shock waves through Washington and beyond. “I would know. I am one of them.”

"The result," the official wrote, “is a two-track presidency,” with Trump praising dictators and autocrats, while “the rest of the administration is operating on another track, one where countries like Russia are called out for meddling and punished accordingly, and where allies around the world are engaged as peers rather than ridiculed as rivals.”

Trump, in the call today, expressed continued high confidence in his international deal-making abilities, despite limited results to date, saying he expects Iran will call soon to make a new deal, and saying he will also reach some sort of an Israeli-Palestinian peace deal.

“If you look at Israel and the Palestinians, it's always top of everybody's list in terms of levels of difficulty,” Trump said in response to a question from Dershowitz, who has written a book arguing against impeaching Trump and frequently defends him on television. “But we're going to be able to get it done.”

“Iran is no longer the same country,” Trump said. “I would imagine that they’ll be calling in the not-too-distant future to try and make a deal. If we can make a real deal, we’ll do it. If they don’t call, that’s OK, too. Eventually, they’re going to have no choice. But we’ll see what happens.”