President Donald Trump hailed an apparent Turkish decision to halt a military offensive in Syria as a major breakthrough and said now the United States was getting out. 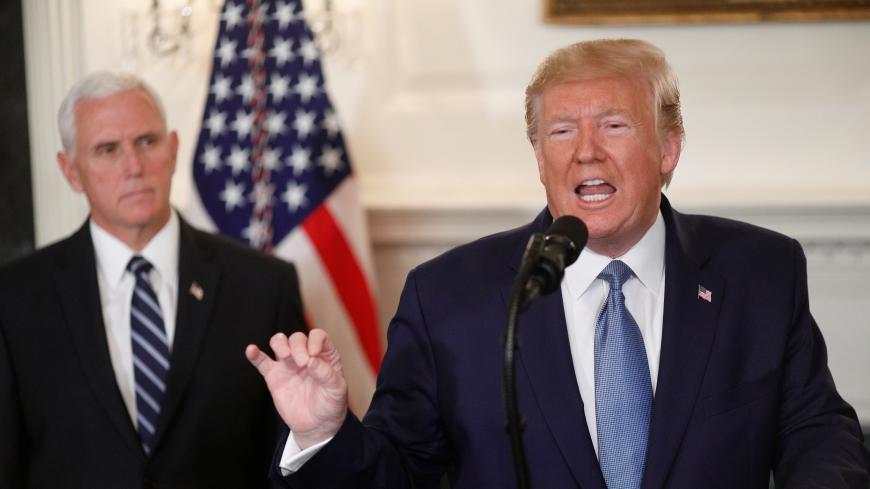 US President Donald Trump delivers a statement on the conflict in Syria with Vice President Mike Pence at his side in the Diplomatic Room of the White House in Washington, US, Oct. 23, 2019. - REUTERS/Tom Brenner

“This was an outcome created by us, the United States, and nobody else,” Trump, flanked by Vice President Mike Pence and Secretary of State Mike Pompeo, said in remarks from the White House Diplomatic Reception Room, as if it was a top national security development. “This is something they've been trying to do for many, many decades.”

Evidently under the impression that a historic peace deal had been achieved, Trump said US forces would be leaving Syria, except for a small number of troops he decided should stay to prevent Iran or the so-called Islamic State (IS) from seizing oil fields in eastern Syria.

“We've secured the oil, and, therefore, a small number of US troops will remain in the area where they have the oil,” Trump said. “And we're going to be protecting it, and we'll be deciding what we're going to do with it in the future.”

“Turkey, Syria and all forms of the Kurds have been fighting for centuries,” he said. “We have done them a great service … and now we're getting out."

Down the street, in Congress, Trump’s top envoy on Syria and combating IS, James Jeffrey, faced a second day of bipartisan skepticism on Trump’s recent moves in Syria and the abrupt abandonment of the Kurdish-led Syrian Democratic Forces, which were the effective ground troops for the US-led coalition fighting IS.

Several members from both parties expressed grave concern at the prospect of an IS resurgence. More broadly, several members expressed alarm at how Trump had erratically made his decision to withdraw from Syria, without consulting allies or Congress and instead deciding the issue largely in a phone call with Turkish President Recep Tayyip Erdogan on Oct. 6.

Jeffrey reluctantly acknowledged under questioning by members of the Senate and House foreign affairs panels this week that he had not been on the call. Nor, he said, at the end of an over three-hour House Foreign Affairs Committee hearing today, had he even seen a transcript of the call, though he insisted he had been extensively briefed on it.

Still, Jeffrey said it was his understanding that Trump had not given Erdogan any greenlight on the call, as several members of the panel suggested.

“We did not give a greenlight on this issue,” Jeffrey told the House foreign affairs panel today.

“I think this absolutely was a greenlight,” Rep. Adam Kinzinger, R-Ill., said. “It was a proverbial green light.”

The Illinois Republican, who has served in Iraq and Afghanistan, expressed frustration with what he called the “'forever war' caucus,” and the use of the desire to bring troops home “as an excuse to reinvigorate [IS].”

“It feels as though there was an implicit greenlight,” Rep. Chrissy Houlahan, D-Pa., said, regarding Trump’s apparent acquiescence during the call with Erdogan to withdraw the 50-100 US special operators in the territory that Turkey wanted to enter.

Jeffrey demurred: “No, the Turks would have simply driven around them.”

Malinowski, a former official in the State Department under the Barack Obama administration and at Human Rights Watch, criticized Trump’s focus in his comments today on securing Syrian oil, but not the Syrian people.

“The only thing he said is he will secure the oil,” Malinowski said. “I have not heard him say a darn thing about securing the people.”

“Again, we will do everything we can to achieve our objectives in Syria and maintain the well-being to the extent that we can of these people,” Jeffrey said. “But there are limits to what we can do with force.”

Asked by Rep. Ted Deutch, D-Fla., when he had last briefed Trump on Syria and the counter-IS campaign, Jeffrey said he had never briefed Trump, though he said he consulted with Pompeo frequently, almost daily.

"I have never briefed the president. I would never expect to brief the president,” Jeffrey, a former US ambassador to Turkey and Iraq, told the House panel. “I work for Mike Pompeo."

“I have not,” Jeffrey responded.

“Can you sit there today and say, as a result of the president’s phone call with Erdogan, that that did not affect in any way Erdogan’s decision-making?” Rep. Bill Keating, D-Mass., asked.

“I believe Erdogan had taken the decision before the call, and the president tried to put on the table all the other elements,” Jeffrey responded.

Sen. Lindsey Graham, R-S.C., a top Trump ally who expressed distress at a possible abrupt withdrawal from Syria, praised Trump in a statement today for agreeing to maintain a US troop presence to protect Syrian oil.

“By continuing to maintain control of the oil fields in Syria, we will deny Assad and Iran a monetary windfall,” Graham said in a statement. “We can also use some of the revenues from future oil sales to pay for our military commitment in Syria.”

But a senior administration official suggested awareness on Trump’s national security team that the president's commitment to maintain a residual force in Syria may be reversed at any time.

“Eventually, the goal of the administration, the goal of the president … is to have all American troops out of Syria, and that's something that we believe will ultimately happen,” the senior administration official, speaking not for attribution, told journalists on a White House background call today. “But, in the meantime, we are going to have some residual forces in the appropriate areas in Syria to ensure that the dramatic victory that the president and the United States and our coalition allies won against [IS] remains … in place.”