An Egyptian director is eager to redeem Ashraf Marwan as Egypt's "agent" and not a legendary spy for Israel as the Israeli version of his story hits Netflix. 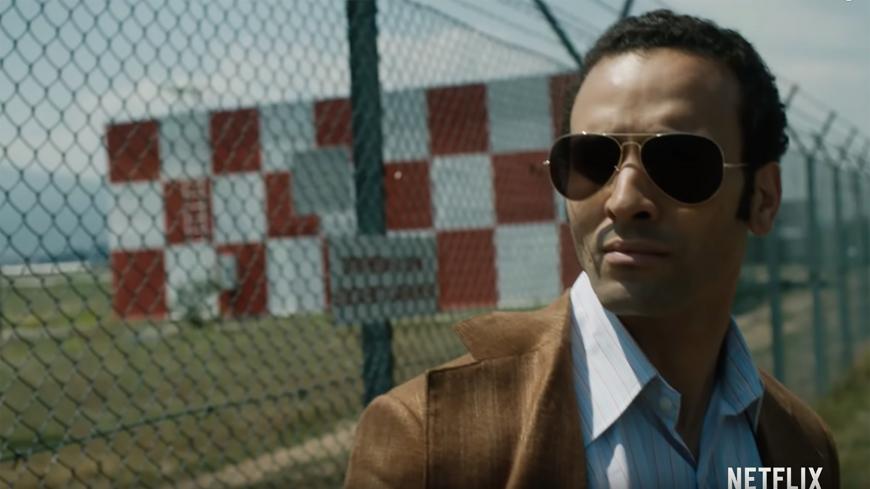 A screenshot from the trailer for "The Angel" - Netflix

Ashraf Marwan, the son-in-law of Egypt’s ex-president Gamal Abdel Nasser, sits in front of the TV in a room in London, watching the news on the escalation over the Suez Canal. He moves restlessly, pondering. The next scene shows him placing a call to the Israeli ambassador from a public phone — the first step of his close cooperation with Israeli intelligence that earns him the code name “the in-law” or, more widely, “the angel.”

These scenes appear in the trailer for a new film from global production company Netflix, “The Angel.” It was inspired by the book “The Angel: The Egyptian Spy who Saved Israel” by Israeli author Yuri Bar Joseph.

Directed by Ariel Vromen, the film shows how Marwan, played by Dutch actor Marwan Kenzari, started his liaison with Israeli intelligence shortly before Nasser's demise. The communications grew deeper and his intelligence more valuable after Anwar al-Sadat took power and appointed Marwan as his security adviser. During this period, Marwan divulged sensitive information on the Egyptian preparations to carry out an all-out attack against the occupied territories in Sinai. The information revealed to Israel included the date of the planned attack — Oct. 6, 1973 — which helped Israel mobilize its forces.

But others, particularly on the Egyptian side, believe that Marwan’s story has another face. In 2007, a week after Marwan’s mysterious death, President Hosni Mubarak called Marwan “a patriot loyal to his country.” Mubarak told reporters that Marwan carried out “patriotic acts which it is not time yet to reveal,” and said he was “not a spy for any organization at all.” People who believe that Marwan was a patriot think that the young businessman approached Israel in cooperation with Egypt’s leadership to dupe the Israelis into believing that they had a well-placed spy at the center of power in Cairo. He gave Israel misleading information, including that Egypt was ready to launch an offensive in April 1973.

Marwan's loyalty to Egypt is the subject of a new script by Egyptian author Hani Sami, who is working to obtain the agreement of Marwan’s family and the Egyptian authorities to finalize it. On Aug. 8, following a two-year freeze, Egypt’s censorship authority gave permission for Sami to write and produce a film called “The Agent,” which will show Marwan as “faithful to Egypt to the bone.” But he still needs the censorship authority’s final approval once the work is completed.

Sami has not yet completed writing the script, as he was waiting for the release of “The Angel” before putting the finishing touches on his own film.

Many critics fear that “The Agent” will suffer for its writer's lack of access to official and family archives.

“Waiting for the consent of state bodies means that they are not behind the film or [they are not] making available documents and evidence that might support its contents,” professor of political science at the American University in Cairo Saeed Sadiq told Al-Monitor. “The film will be a product of the writer’s imagination. So we should not expect it to be of any great significance.”

It is no easy task to explain the actions and motivations of one of the most controversial spies of the 20th century. An Egyptian businessman, he invested in a variety of fields from football clubs to jewelry, but was far from rich until the 1990s. He married Mona, Nasser’s favorite daughter, in 1965. He then moved to London to complete a master's degree in chemistry. During his time there, Marwan established contact with Israeli intelligence, handing over important information in exchange for money. After Sadat’s rise to office, Marwan became his political and security adviser on May 13, 1970, a senior position that made him very valuable to Israeli intelligence.

In April 1973, Israel conducted a general mobilization that cost more than $20 million after receiving a message from “the angel” detailing Egypt's preparations to launch a full-scale offensive. On Oct. 4, Marwan warned Israel that Egypt’s attack would take place in Sinai at sunset on Oct. 6. However, the campaign was in fact launched four hours earlier.

With the end of the war, Marwan was appointed president of the Arab Organization for Industrialization until 1979. On June 27, 2007, he died after falling from the balcony of his London apartment amid suspicions of a murder to prevent him from publishing his personal memoirs.

Netflix’ “Angel” has sparked widespread controversy in Egypt, not least because it promotes an Israeli perspective on these events. “Unfortunately, the film will have a big impact on public opinion, marketing an Israeli point of view, especially as Netflix is a company with such wide reach,” Sadiq told Al-Monitor.

According to Maj. Hamdi Bakhit, a member of the Egyptian Parliament’s Committee on Defense and National Security, “The Angel” is a means of placing psychological pressure on Egyptians as part of Israel’s information war.

“The issue of Ashraf Marwan has been raised more than once. Egypt has cleared him of the charges of spying for Israel,” he explained to Al-Monitor. “Marwan’s aim was to provide false and misleading information to the Israeli side, and he succeeded.”

Bakhit downplayed the relevance of the Netflix movie, saying, “Why would we take any action against the company? We shouldn’t pay great attention to the film so as to not exaggerate its importance.”

Tarek Fahmi, head of the department of Israeli studies at the National Center for Middle East Studies, considers “The Angel” an Israeli attempt to promote Mossad as the strongest security apparatus in the region. Fahmi told Al-Monitor that Israel is exploiting the story of Marwan amid growing tensions in the region and struggles over influence.

Not all Israeli circles agree that Marwan was working for Egypt. There remains a sharp split in Israeli opinion over Marwan's services and whether he was acting as a double agent. Among them is political science professor and London-based historian Ahron Bregman, who knew Marwan personally for five years prior to his death and uncovered the identity of “The Angel” as Marwan in 2002.

Bregman’s own book on Marwan, titled “The Spy Who Fell to Earth,” will also be turned into a documentary by London-based production company Salon Pictures.

“Israelis believe that Ashraf was their man. As I knew him personally, I am able to confirm that he was the best spy Egypt ever had,” said Bregman in an interview with Al-Monitor. He noted that Marwan was one important member of a group of 40 Egyptians whose mission it was to deceive Israel.

He said that Marwan himself had told him so. “In one of my telephone conversations with Ashraf, he admitted that he was one of those people,” he told Al-Monitor.

So why doesn't Egypt release documents that refute the Israeli account? “It is likely that Egypt doesn’t have any evidence, because the cooperation may have taken place between individuals — that is, between Sadat and Marwan,” Bregman replied.

According to Fahmi, laws surrounding intelligence operations prohibit the publication of any classified information, even when there is evidence to document it.